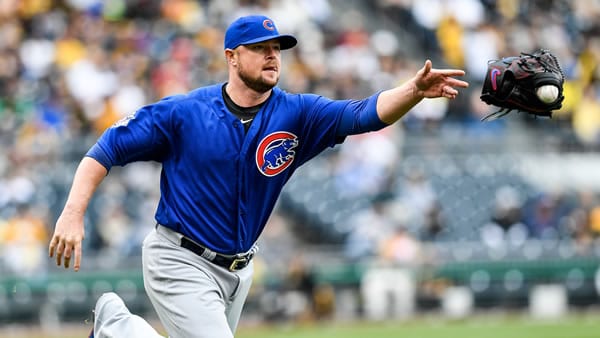 The top two teams in the NL Central continue a five-game rivalry series when the Cubs and Cardinals get it on Sunday evening at Wrigley Field. Chicago took the opener of this series Friday night, but St. Louis swept a doubleheader from the Cubs Saturday. Who do we like here for our free MLB pick?

Sunday’s MLB betting odds opened Chicago and Lester at around -120 over St. Louis and Hudson, with an over/under of 8.5 runs. Both those figures were holding steady in the early betting action.

The Cubs could also be found getting around +130, giving the run and a half on the MLB betting run line.

Chicago took the opener of this series Friday night 4-1 behind Yu Darvish but St. Louis took two seven-inning games Saturday by scores of 4-2 and 5-1. The Cubs won Friday as -140 favorites on the MLB betting odds while the Cardinals won at +100 and -105 Saturday.

The unders are 2-0-1 so far in this series, as runs have been a bit hard to come by.

With Saturday’s wins St. Louis is 5-2 over its last seven games.

With Saturday’s losses, Chicago is 1-3 over its last four games.

At 23-17, overall, the Cubs lead the NL Central by 2.5 games over the 16-15 Cardinals. Chicago also trails the Dodgers by 6.5 games in the battle for the best record in the National League.

St. Louis, meanwhile, also owns the No. 6 spot in the National League standings, which is good for a playoff spot in this abbreviated 2020 MLB season.

These teams have split eight meetings this season.

Lefty Lester is 2/7 on quality starts this season and 0 for his last four. Tuesday, he gave up five runs and eight hits through 5 1/3 innings of an 8-7 Cubs win over Pittsburgh. And over his last four starts, he’s allowed 19 runs and 34 hits, including six home runs, through 20 innings.

Over two starts against St. Louis, last season Lester gave up nine runs and 14 hits through 11 innings. The Cubs managed to split those two games.

Hudson is 2/5 on quality starts this year and two for his last two. On Monday, he held Cincinnati to two runs – one earned – and four hits through seven innings of a 7-5 Cardinals victory. And over his last four outings, he’s allowed just four ER and ten hits through 21 2/3 innings.

St. Louis, thanks in part to some limited run support, is 2-3 with Hudson this year, with the unders going 3-2.

St. Louis is batting .234 against left-handed pitching this season, with a .333 team OBP and a .366 team slugging percentage. The Cardinals have also scored a total of 13 runs over their last four games.

The Cubs are batting .240/.322/.453 vs. right-handed pitching this season. Chicago has also scored a total of nine runs over its last four games.

We’re giving Hudson a short edge in the pitching match-up, and St. Louis owns an advantage in the bullpen comparison. So we like the Cardinals here getting the underdog price. Don’t forget that we also offer free weekly NFL picks! Bookmark that page and check back weekly for expert predictions from professional handicappers. Free!