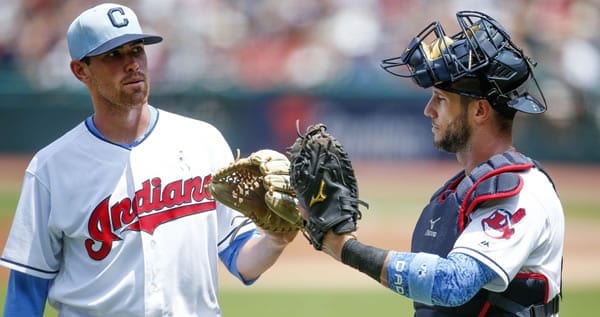 After splitting the first two games of this AL Central rivalry series, the Tribe and the White Sox hook up for a rubber match Sunday night in Chicago. Who do we like here for our free MLB pick?

Sunday’s MLB betting odds opened Cleveland at around -125 over Chicago, with an over/under of 7.5 runs. Both those figures were holding steady in early betting action.

Chicago took the opener of this series Friday night 2-0, but Cleveland won Saturday’s game 7-1. The ChiSox won Friday as +120 home dogs while the Indians won as -135 favorites Saturday and covered against the run line at a price of +115.

Also, both games in this series have played under their totals.

Cleveland is 4-1 over its last five games while Chicago is 1-3 over its previous four contests.

At 9-7 overall, the Indians trail division-leading Minnesota by 1.5 games in the AL Central, with the 8-7 White Sox another half-game back.

Cleveland went off this season playing against a season wins over/under of 32.5.

Chicago went off this season pegged against a wins O/U of 31.5.

Last year the ChiSox took the season series from the Tribe 11 games to eight.

Giolito is 2/3 on quality starts this season. Last time out, Tuesday night, he held Milwaukee to two runs and four hits through six innings, with three walks and nine strikeouts, in a 3-2 Chicago victory. And just before that, he tossed six innings of four-hit, shutout ball in a 4-0 win over these Indians.

Over his last three starts against Cleveland, two last year and the one 11 days ago, Giolito allowed zero runs – that’s 0 – and 12 hits through 20 2/3 innings, with five walks and 23 whiffs. Chicago won all three of those games.

Bieber is the early leading candidate to win the American League Cy Young Award this season. He’s 3/3 on quality starts this season, and the Indians are 3-0 with him. Last time out, Tuesday night, he held Cincinnati to two runs and five hits, although two of those hits were solo homers, through 7 2/3 innings of a 4-2 Cleveland victory. And just before that, he held Minnesota scoreless on three hits through eight frames, with 13 strikeouts against zero walks, in a 2-0 Tribe win.

So for the season, Bieber’s allowed just two runs and 12 hits through 21 2/3 innings, with only three walks and 35 whiffs.

Cleveland is batting just .190 this season against right-handed pitching, with a .309 team OBP and a meager .285 team slugging percentage. The Indians have also been held to two runs or less ten times through their first 14 games.

Chicago is batting .261 vs. RH pitching this season, with a .319 OBP and a .410 slugging percentage. The White Sox have also been held to nine total runs over their last five games.

It would be easy to give Bieber the check-mark in this pitching match-up, but Chicago actually hit him a bit last year, while Giolito has Cleveland stymied. And with neither team raking the ball right now offensively, we peg this game as closer to a pick ’em than one with a -125 favorite. So we’ll make a value play here and take the White Sox at the home-dog price. Bet today’s MLB picks for FREE by taking advantage of a limited time offer where you can deposit anywhere from $100 to $250 and get a dollar for dollar 100% matching REAL CASH bonus at BetNow!