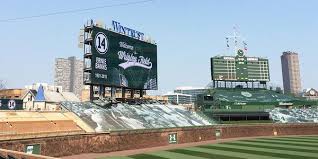 The Rockies have done a great job of overcoming their horrendous start and getting themselves back into the thick of things in the National League. Entering Tuesday’s games, they’d won eight in a row, but they couldn’t make it nine for what would have been the first time in their history. So now they’re trying to start a new streak, and they’ve got to bounce back after a 6-3 loss to the Cubs that marked the first time in two weeks that Colorado hadn’t scored more than three runs. They’d built a 14-game string where they’d managed to put home at least four and usually more, and it was what propelled them during their streak. The last time the Rockies didn’t score at least four came on a trip to Philadelphia, where the Rockies took a 2-1 defeat. Since that game, they are now 12-2.

Yu Darvish has been strong for most of the season, but his presence in this game presents a weird situation for those looking to bet on the Cubbies: Darvish actually hasn’t been pitching well at Wrigley compared to pitching on the road. Whether he just doesn’t feel comfortable there, isn’t used to the day games or isn’t happy in Chicago, the reality is that Darvish is a different pitcher when he pitches at home.

Usually, that goes in the other direction, with a pitcher able to dominate in a familiar park and keep the other team from generating much offense. But when Darvish is at home, he’s given up at least three earned runs in every single start except for the Marlins, who have more like a Double-A offense at the moment. His most recent home start wasn’t pretty: he gave up 12 hits and allowed six runs to cross the plate, only getting bailed out by the Cubs’ offensive firepower. He’s got to be better to give the Cubs a real shot here.

Score the Goal…and Then Some.

Hope you’re ready to see a lot of offense, because these two can score with the best of them. The teams have combined for 628 runs this year, and the Cubs rank second in the National League in on-base percentage, behind only the Dodgers. So Rockies starter German Marquez will have to be at his sharpest in order for his team to get a result, and that’s been the case in recent games. In his past three starts, Marquez made it to the seventh inning each time and picked up a win in two of the three games, with the third being a Rockies win and a no-decision.

That’s the good news for Marquez. The bad news is that Toronto (who pulled one out against our NY pick), Baltimore and Pittsburgh don’t exactly scare or impress anyone, so this looks like a much stiffer test than any of those three games were. Still, Marquez is the right kind of pitcher for Wrigley, as he tends to pitch ground balls over fly outs.

The Rockies return to the scene of the crime from a year ago. Last season, Chicago was supposed to be the NL Central champion, but the Cubs got tripped up in the tiebreaker by Milwaukee and then fell at home to Colorado in the NL Wild Card Game, earning the Rockies the right to get trucked in the first round by the Brewers. Counting the win in the Wild Card Game, the Rockies have now won the season series with the Cubs in each of the past three seasons (they went 3-3 last year before winning the wild card). Colorado is going to come into this matchup comfortable that it can reverse the first meeting between the two squads, mainly because the Rockies know how to win at Wrigley.

If Darvish were a better pitcher at home, I’d lean toward the Cubs in this matchup. However, he’s just not the same pitcher at Wrigley that he was with the Dodgers. I’m not sure what the issue is, but Darvish has not figured out how to pitch comfortably in Chicago this season, and it gives me serious concern about taking the Cubs in this game.

Conversely. Marquez is pitching on a night when the balls shouldn’t be flying out of Wrigley too fast, and he’s more of a ground-ball pitcher anyway, which is what you need to be to succeed at Wrigley. There’s enough here to like about the Rockies to lead me toward them in this matchup. I’d prefer to be better than even money on Colorado on the road, but the price could be worse. Give me the Rockies.