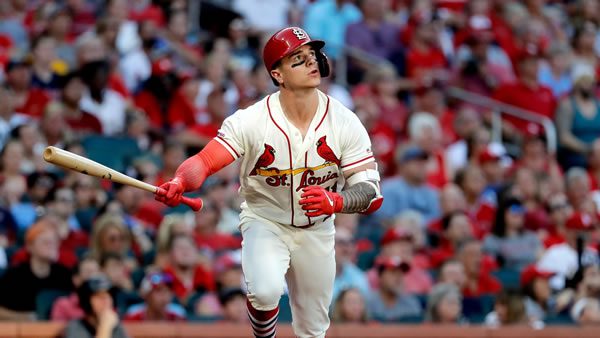 The St. Louis Cardinals host the Chicago Cubs on Friday September 2nd at Busch Stadium. The first pitch in this matchup is scheduled for 08:15 ET. The MLB Odds Board places St. Louis as the favorite (-240), with an OU line set at 8.0.

Heading into today’s game, Chicago will be looking to tack on another win, after taking down Toronto by the score of 7-5. For the game, Chicago’s pitching staff allowed 5 runs on 7 hits. The Cubs benefited from an offense that generated 7 runs on 10 hits. This victory came despite being the betting underdog, getting 180.0 on the moneyline. This game went over the posted over-under line of 9.5 runs. On the season, Chicago’s over-under record is 57-64-10.

St. Louis is coming off a 2 run win over the Reds (5-3). For the game, the pitching staff held the Reds to 3 runs on 14 hits. Offensively, they finished with 5 runs on 8 hits. In the game, St. Louis was able to take care of business as they were the favorite at -250.0. So far, the team has won 70.0% of the games in which they were favored. Combined, the Cardinals and Reds’ run total fell below the over-under line of 9.5 runs. This result comes as no surprise, as the team’s over-under record is just 63-64-4.

Across their last 5 contests, the Cardinals are above .500, going 4-1. Their recent success is backed by an average scoring margin of +11 (last 5). Overall, the Cardinals are averaging 4.92 runs per contest. But, over their last 5 outings, they have been scoring at a clip of 6.2 runs per contest. On the season, St. Louis has won more than half of their series, going 22-10-8.

The Chicago Cubs will send Adrian Sampson to the mound with an overall record of 1-4. So far, Sampson has put together an ERA of 3.97. In his appearances leading up to today, he has lasted an average of 4.66 innings. Compared to other starters, the right-hander has a high BA allowed, currently sitting at 0.271. So far, Sampson has managed to keep the ball in the ballpark, allowing just 0.97 home runs per 9 innings. This season, he has struck out 18.0 of the batters he has faced. This has led to a per-game average of 3.57. Leading into the game, he has shown a strong command of his pitches, averaging just 2.33 walks per contest.

In today’s game, St. Louis turns to starter Jordan Montgomery. For the year, he has a record of 3-3. So far, Montgomery has put together an ERA of 3.69. In his appearances leading up to today, he has lasted an average of 5.44 innings. Montgomery comes into the game with a batting average allowed of 0.236. Opposing hitters are hitting home runs at an above-average rate against Montgomery. This year, he is allowing 1.18 HRs per 9 innings pitched. Per game, Jordan Montgomery is averaging 4.62, on a strikeout percentage of 21.0%. For the season, he has struggled with command averaging 1.81 walks per outing.

Today’s matchup between the Chicago Cubs and St. Louis Cardinals will be their 17th meeting of the season. Currently, St. Louis is winning the season series 10-6. Through 16 games, the series over-under record is 7-9, with the average run total sitting at 9.0 runs per game. The averge scoring margin in these meetings is 3.94 runs. Dating back to last season, St. Louis picked up 10 wins compared to 9, taking the season series. In these 19 meetings, the two teams combined for an over-under record of 10-9. Last year, the Cubs and Cardinals averaged 9.0 runs per game. The average scoring differential in this series was 3.11 runs per game.

Leading into Friday’s NL Central showdown, between Chicago and St. Louis, the Cardinals are the heavy favorite on the moneyline. Although Jordan Montgomery is coming off a rough outing vs Atlanta, I expect him to get back on track vs the Cubs. On the other side, Adrian Sampson has pitched well for Chicago but is running into a red-hot Cardinals lineup.

Free MLB Pick: Cardinals Runline. Football season is here! Have more to bet with by taking advantage of the bes bonus running, a 125% real cash bonus up to $400 in FREE bets! Simply sign up for a betting account at GTBets through this special link and use bonus code PREDICTEM. This bookie also offers a FREE half point every time you bet your favorite NFL, college football, NBA and college basketball team! Lastly, they have a sweet player rewards program that earns you free wagers!