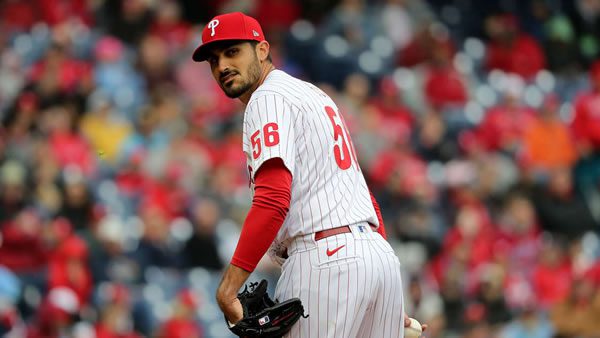 The Philadelphia Phillies host the Los Angeles Dodgers on Sunday, May 22nd at Citizens Bank Park. The first pitch in this matchup is scheduled for 01:35 ET. The MLB Odds Board places Los Angeles as the favorite (-140), with an OU line set at 10.0.

In their last 5 games, the Dodgers have gone a perfect 5-0. During this time, they have an average scoring differential of 18. Their hot play has been driven by an offense that typically averages 5.49 runs per game. But, over this stretch, this figure has bumped up to 7.0 So far, Los Angeles has won over half of their 13 series played, going 9-4-0.

Philadelphia will be looking to move on from a tough loss to the Dodgers by the score of 7-4. On their way to giving up 7 runs, the Phillies staff allowed 13 hits. The Phillies’ offense ended the game with just 4 runs on 6 hits. Leading into the game, Philadelphia was the betting favorite at -120.0. So far, the team has won 44.0% of the games in which they were favored. The Phillies and Dodgers went over the total run line set at 9.5 runs. For the season, the team’s over-under record is (20-18-2).

The Los Angeles Dodgers will send Tony Gonsolin to the mound with an overall record of 4-0. In his previous outings, Gonsolin is lasting an average of 4.71, putting together an ERA of just 1.64. Hits have been hard to come by against the right-hander, as his batting average allowed is just 0.165. Not only does Gonsolin have a strong batting average allowed, but he has also avoided giving up home runs. In his previous outings, opponents are averaging just 0.55 home runs allowed per 9 innings. On the season, Tony Gonsolin has had no problem racking up strikeouts, posting a strikeout percentage of 23.0%, while averaging 4.28 K’s per game. Command has been a problem for Gonsolin, as he is giving up 4.09 walks per outing.

Zach Eflin gets the start for the Phillies, with an overall record of 1-3. To date, Eflin has an ERA of 4.5 while lasting an average of 5.0 innings per appearance. Opposing teams have hit the ball well against the right-hander, with a batting average of 0.271. Opposing batters are hitting for power at a below-average rate against Eflin, as he is allowing just 0.3 per 9 innings. Eflin has accumulated a strikeout percentage of 18.0% and a per-game average of 3.83. Throughout the season, Eflin has avoided walking batters, allowing just 1.5 per contest.

For the season, Los Angeles Dodgers and Philadelphia Phillies will be playing their 6th game of the season. Today’s game will be a rubber match for the two teams, as Los Angeles and Philadelphia each have 3 wins. The over-under record in this series sits at 5-1. The average run total in these games is 5.33 runs per game. The averge scoring margin in these meetings is 2.67 runs. Going back to last year, Los Angeles won the season series, 4 games to 2. The over-under record in last year’s matchups was 0-5-1, with the average run total being 5.33 runs per game. The average scoring differential in this series was 3.0 runs per game.

In today’s matchup between the Dodgers and Phillies, I recommend taking the Phillies to pull off the upset. Even though starter Zach Eflin has the higher ERA, his FIP comes in at just 2.59. This figure is even better than Tony Gonsolin for the Dodgers.