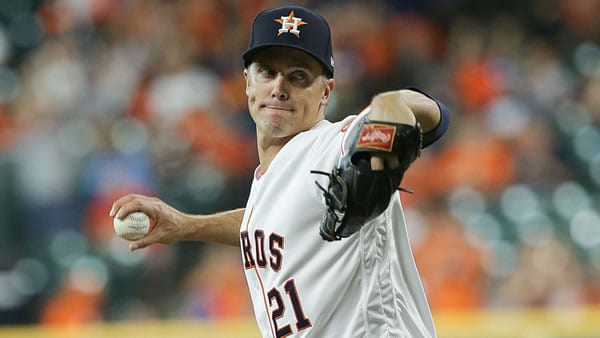 The Dodgers are the best team in the Majors this season while the Astros are struggling to play .500 ball. But Houston just pulled off a shocking rally to beat LA Saturday night. How are we playing this game with our Today’s free MLB pick?

Sunday’s MLB betting odds opened this game at right around a pick ’em, with an over/under of eight runs. Both figures were holding steady in the early betting action.

Houston took the first game of this series Saturday night 7-5. The Astros trailed Los Angeles 5-1 through seven innings Saturday, then scored one run in the eighth inning and five in the ninth off the Dodgers bullpen to steal the victory.

Houston won as a +135 underdog on the MLB betting odds Saturday, and the game played over its total of 9.5 runs thanks to that late Astros comeback.

With Saturday’s win, Houston is 2-2 over its last four games, which is an improvement, following an eight-game losing skid. At 23-23 overall, the Astros trail first-place Oakland by 6.5 games in the AL West, but they’re 2.5 games ahead of Seattle in the battle for second place, and second place makes the playoffs this season.

With Saturday’s defeat, Los Angeles is just 2-4 over its last six games. But at 32-14 overall, the Dodgers still lead the NL West by three games over second-place San Diego, and they own the best record in the National League.

LA leads the season series with the Astros two games to one.

Lefty Wood is 0/1 on quality starts this season, to go along with four appearances in relief. Most recently, Thursday night, he gave up two runs – one earned – and two hits in one inning against Arizona. But over his three appearances prior to that, he threw 3 1/3 innings of scoreless ball.

Wood has pitched a total of 7 2/3 innings on the season, allowing four ER and seven hits, with five walks and ten strikeouts.

In his last start against Houston, two seasons ago, Wood allowed one ER and four hits through six frames of a 2-1 Dodgers defeat.

Greinke is 5/9 on quality starts this season. Tuesday, he gave up four runs and seven hits through six innings of a 4-2 Houston loss to Oakland. But over his seven starts previous to that, he held foes to 12 runs and 34 hits through 42 1/3 innings, with five walks against 42 strikeouts.

On the season, the Astros are 4-5 with Greinke, but 4-2 over his last six starts.

In two starts against the Dodgers, last season while still with Arizona, Greinke got popped for 11 runs and 14 hits, including four home runs, through 9 2/3 innings. The Diamondbacks managed to split those two games.

Houston, without the aid of the garbage can bangs, is batting .247 against left-handed pitching this season, with a .319 team OBP and a .444 team slugging percentage. The Astros have also been held to two runs or less in five of their last seven games, and they’re operating without sparkplug Jose Altuve, who’s missed recent action with a sore knee.

Los Angeles is batting .260/.340/.503 against right-handed pitching this season. Numbers like those help this lineup rank among the top five in the Majors in this split.

The Houston bullpen owns a 4.47 ERA this season and a 1.62 WHIP.
The Dodgers pen owns a 2.77 ERA and a 1.08 WHIP. Numbers like those help this unit rank among the top two or three bullpens in Baseball at the moment, despite what happened Saturday night.

We’d give Greinke the check-mark in the pitching match-up, but the Dodgers hit him hard last year. Meanwhile, LA owns the edges in the splits with the sticks and in the bullpen comparison. We’ll take the Dodgers here, the home team at the affordable price, for our free MLB pick for Sunday. Don’t forget to check out our Week 1 MNF picks!