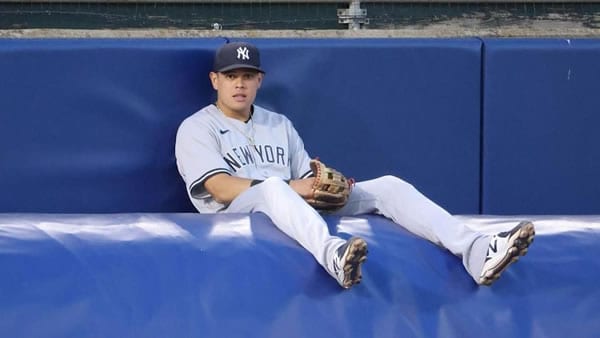 Staying In the Fight

Say this much for the Royals: they care. Kansas City might be short on talent, especially in terms of pitching, but the Royals have gutted out enough wins to keep themselves within shouting distance of the wild card race. Kansas City comes into this matchup having won three of four and just took a series off the Red Sox, showing that they can get the job done from time to time.

Of course, this still isn’t a very talented team, as evidenced by the fact that their win over the Red Sox was preceded by a sweep at the hands of the Tigers. But most of the Royals’ problems come from the fact that they can’t pitch all that well, with Wednesday starter Danny Duffy being a notable exception. Duffy was sub-par in his two most recent starts, but before then, he’d only given up two earned runs in five appearances. Even after two less-than-stellar trips to the mound, he’s only surrendered nine earned runs on the year, and hitting isn’t a thing that this Yankees team is well known for.

One big question over the rest of this three-game set: how will the Yankees respond to seeing their bullpen blow a lead after their ace put them in what should have been a good position to win? Gerrit Cole handed the Yankees a 3-2 lead at the start of the eighth inning, then watched from the dugout as the Royals promptly flipped the game on its head by scoring four in the top half of the inning.

The Yankees will really kick themselves for failing to take advantage of Kansas City’s generosity on Tuesday, as the Royals gave them eight free baserunners via walks. Yet the Yankees couldn’t cash in, only bringing home one of the eight runners who reached on a walk, and that only because DJ LeMahieu immediately homered after Brett Gardner’s free pass. That’s been the Yankees’ big problem all season long: they don’t hit well enough to take advantage of their chances on the basepaths. Now it’s cost them a game they had no business losing and one that their ace pitched to boot.

The Yankees are a hard team to bet in terms of totals because they’ve consistently bounced between hitting the over and hitting the under. New York has played to the “Over” five times and the “Under” four in their past nine games and never in that stretch have the Yankees done the same thing in consecutive games.
For the season, the Yankees have been much more of an under team, as their games have mostly been dictated by the fact that most of them aren’t hitting unless the ball leaves the stadium. The hitting’s been a little better, but the Yankees have a new problem: they can’t string runs together. The Yankees have zero ideas on how to manufacture runs, which is a big problem when two-thirds of their hits are singles, and they don’t steal bases. On the year, the Yankees have just 15 stolen bases and 93 extra-base hits that didn’t reach the seats. Unless they get the right pitch to drive out of the park, the Yankees have been fairly toothless.

It should be a great night for baseball, with temperatures at 76 degrees and winds barely registering, heading north toward first base at four miles per hour.

The Yankees might not be in the right state of mind to get this game after Tuesday’s meltdown, and Kansas City has played pretty well over the past few days. With the Royals’ biggest weakness being their pitching, they’ve got the upper hand this time, considering that they’re sending the one pitcher that they can count on to the hill.
It’s a good time to take a shot with Kansas City as the underdog. Bet your MLB picks FREE this week by scoring a 100% REAL CASH bonus on your first deposit of $100 to $300 at MyBookie Sportsbook! (Must use bonus code PREDICT100 to get the extra cash credited!)