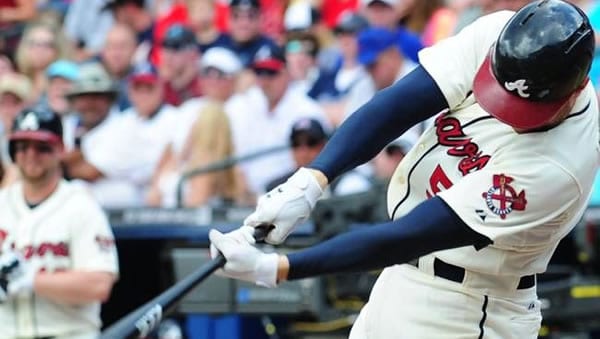 Moneyline: MIA +175/ATL -210 (Get the best odds >>> Overpaying for odds is the second worst things you can do in sports betting; second only to not being able to pick winners!)

Atlanta first baseman Freddie Freeman is widely known as a complete player, but in 2021, he’s basically been an all-or-nothing hitter. Out of his first five hits on the season, four of Freeman’s safe landings left the yard entirely. But when the ball has stayed in the park, Freeman’s had a somewhat anemic season so far. Heading into Tuesday, he had a batting average of .032 when the ball remained in the field of play, with five strikeouts and six walks. Anytime you’ve got as many strikeouts as you do hits after the first week of the season, you’re really off to a rough start.

And that’s one of the reasons why Atlanta is underwater at this point of the year. The Braves need their All-Star first baseman to hit like an All-Star, and if it doesn’t happen, anyone who thought Atlanta could contend for the World Series in 2021 (read: me) is going to end up looking very foolish at the end of the season. There are signs that Freeman might be breaking out of his slump, as he managed a single and a double Tuesday.

Can You Come Home Again?

Nick Neidert’s taking the mound as a starter for just the second time as a major leaguer, and he’s doing so in his hometown. Neidert grew up in Atlanta and threw pretty well in his first appearance on the slab at Truist Park, but this will be the first time he returns to Georgia as a starter. So far, he’s made a better starter than he did a reliever, as he threw 4.1 innings against the Mets and held New York to just one run in the loss.

However, the problem for Neidert is his control. It wasn’t on display against the Mets, as he walked five hit-ters during his season debut. Neidert doesn’t miss enough bats to be effective when he’s putting men on base most nights, and while he got away with it against the Mets, it probably won’t happen all that often. If he’s going to get men out, he’s got to improve on his location.

On the other side of the ledger, Charlie Morton’s a long way from home (he’s from New Jersey) except for where it matters most. So far, he’s averaging just over a strikeout per inning and has only walked three hit-ters in 11 innings of work in 2021.

Regression to the Mean?

Usually, runs have been hard to come by when the Marlins have been involved. Miami pitching has been pretty solid, while the Fish have been borderline useless when they’re at the plate. Only four times out of 10 have the Marlins managed to do better than three runs, and interestingly, they’ve done it in two separate stretches of consecutive games.

Against Tampa Bay in the opening series, they plated four runs, taking a 6-4 loss. The next day, they unloaded on Tampa Bay, scoring 12 times against Rays pitching. But the explosion of power wasn’t there the next game: they followed that two-game surge by managing one run against the Cardinals in a series where they scored three runs total in 27 innings.

Against the Braves, the Marlins’ bats were again connecting, as they scored five runs in the series opener and then blasted the Braves out of the park with a 14-run effort. But given that they failed to keep up that mo-mentum the next game, there’s a very real chance that Miami’s bats go silent again. This could be a potential angle to play if you’re looking to fade the Fish and buy low on the Braves.

The wind will be blowing out to left-center field, as it’s heading west-northwest at 11 miles per hour. Temper-atures are set to be 69 degrees at first pitch.

After two rather embarrassing losses for the Braves, I think they’re going to bounce back in this one. The Marlins fell apart after a huge outburst the last time it happened, and I think they’re going to regress to the mean and return to a low-scoring team against a good pitcher in Morton. The bet I want most here is the Marlins to score less than four, which means that as long as Atlanta has a decent day at the plate, the Braves should come through here.

I’ll back Morton and Atlanta to get the win. Bet your MLB picks FREE this week by taking advantage of a 100% REAL CASH bonus on your first deposit of $100 to $300 at MyBookie! (Must use promo code PREDICT100) to receive the special bonus!