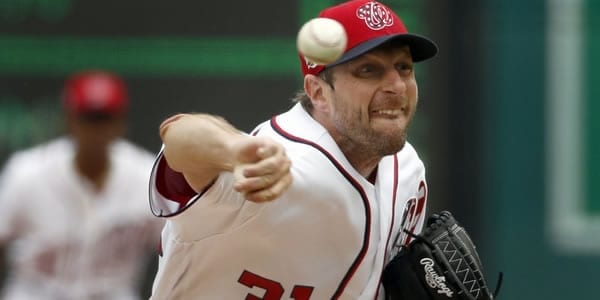 We still don’t know who’s going to be playing where this year, but as MLB keeps pushing toward a late-May start, it’s an excellent time to consider the Cy Young Award possibilities. The Cy is quite a different beast than the MVP because it’s the least team-related of any of the individual awards. As someone who grew up a fan of the Toronto Blue Jays (don’t ask how) and watched Roy Halladay win a Cy Young in 2003 for a typically mediocre Jays team, I know firsthand that it doesn’t matter how good your team is for the Cy. If you’re a good enough pitcher, you’re going to get the votes you need to win this award.

But that said, voters are still human, and they’re still going to look at some of the team stats that a pitcher picks up, such as wins and saves (I highly doubt will come into play, but you never know). And while I mention saves, relievers are highly unlikely to win the Cy. The only pitcher to win the NL Cy Young and record a save in the same season in the past 30 years is Eric Gagne in 2003. With the save becoming less relevant every year, it’s unlikely we see a reliever win again anytime soon.

So this is going to focus on the starters in the senior circuit, and unlike the MVP award, voters aren’t at all averse to picking the same guy multiple times. Greg Maddux and Randy Johnson have each won the Cy four years in a row, and more recently, Tim Lincecum, Clayton Kershaw, Max Scherzer, and incumbent Jacob deGrom have repeated as NL Cy Young winners. So with that in mind, it’s time to dive in and start at the top.

There is no bigger poster child for the movement away from wins and losses in Cy Young voting than deGrom. Over the past two years, deGrom has won 21 games, which used to be considered a benchmark of success in ONE season, not two. But deGrom has also won the past two Cy Youngs, mainly because his middling record is the fault of the Mets’ bullpen and because he misses bats.

That’s one thing that is never going to change with Cy Young voters because strikeouts are entirely within the pitcher’s control. A poor ERA can be the result of trading runs for outs because the offense is having a great day, and it’s more important to get an out in the seventh rather than worry about the difference between an 8-1 game and an 8-2 game. But a strikeout is always because the pitcher won the personal battle between himself and the batter, and that’s the sign of great pitching.

DeGrom has been the only pitcher in the NL to top 250 strikeouts in each of the past two years, and the voters have noticed. As long as he stays healthy, he should be at or near the league lead in strikeouts again this year, as he’s topped 200 K’s in every season where he’s pitched at least 190 innings. His FIP and ERA+ numbers remain strong, and voters have shown time and time again that his record will not make a difference to them, as he’s never topped 15 wins in a season but has finished in the top 10 of Cy Young voting four times in six seasons. His record shouldn’t be a negative this year, either, as the Mets have made a lot of positive moves and seem to be set up to make a run at the postseason. DeGrom has a genuine chance to make it three in a row.

If Jack Flaherty can be the pitcher he was in July, August, and September of last season, this race is over, and not even deGrom is going to be able to hold him off. Over the final three months of the season, Flaherty gave up a mere 11 earned runs in 16 starts, went at least six innings in all but two of those starts and struck out at least seven batters in 13 of 16 starts. In short, for three months, he was the best pitcher in baseball.

And that’s both why Flaherty is on the list and the reason why he’s not higher. Over the first three months of the year, Flaherty was a very hittable pitcher. Only twice before July was he on the mound when the seventh inning began. His ERA dropped a full two runs from July 2 to the end of the season because he was a mediocre pitcher in the first three months of the year, giving him plenty of space to build his stats when he got things figured out.

So the question you have to ask yourself is: Is Flaherty the pitcher who dominated the game when the Cardinals needed him most, or is he the pitcher who couldn’t get out of bad situations during the first three months of the season? He doesn’t have time for a slow start this season, and at just 24 years old, we don’t have enough evidence to know whether Flaherty is a top pitcher who has blossomed or a flash-in-the-pan who will fall back to earth. If he picks up where he left off, this bet will be as close to a sure thing as it gets. If he returns to his April form, there’s no chance of a win.

Any man with as much control, power, and stuff as Max Scherzer has to be considered a top threat to win the Cy. DeGrom might be the only pitcher to top 250 K’s in each of the past two seasons, but that’s only because Scherzer’s innings fell to 172.1 last year, which left him with “only” 243 whiffs. Prior to 2019, Scherzer had topped the league in strikeouts three years running, and he easily would have done it again last year had he stayed healthy because his K/BB ratio was an incredible 7.36.

That makes Scherzer the rarest of the rare: a power pitcher who doesn’t beat himself. Scherzer is the anti-Flaherty: he’s about as sure of a bet as you can find for what he’s going to do, as long as he stays healthy. The only real concern is his body, as he’s going to turn 36 in July and can’t have many more seasons left in his arm, given how many innings he’s put on it and the fact that he finally has his World Series ring after last year’s magical run.

But this year, that actually might work in his favor. Scherzer has had far more time to rest his arm and could be even more dominant than usual in a shortened season. Given that Scherzer might only be throwing 100 innings this year, there’s a real chance that he ends up posting one of his best seasons — and that’s a terrifying thought for the rest of the National League.

Usually, I wouldn’t recommend picking a Cub to win the Cy. Even though Jake Arrieta defied the odds and won the award in 2016, the reality is that it’s hard as heck for Cubs players to win the award because of Wrigley Field. Wrigley is one of the most magical parks in all of sports, but the fact that the Cubs are required to play at least 38-day games thanks to a city ordinance means that their pitchers don’t get the same amount of rest that other NL pitchers do.

But this year is different because the Cubs probably won’t have to worry about Wrigley Field until 2021. The odds are that MLB will hold its season at neutral locations, and that places Darvish on equal footing with the rest of the NL. Because of that, he’s got an excellent chance to be a dark horse for the award if he can pick up where he left off last year. Darvish was outstanding in the second half of last season, and he’s consistently a high-strikeout pitcher.

The worry is that Darvish gave up a lot of home runs last season, and has had quite a few problems with keeping the ball in the park at Wrigley. But again, there’s probably no Wrigley this year to give Darvish issues. Instead, he’s likely to play in a hotter climate with a lot less wind, and that means the ball isn’t going to be flying out of the park quite so easily when he pitches. He’s a gamble, no question, but the unique circumstances make him worth a flier.

This bet is getting a lot of play as of late, but it’s a real gamble because of the type of pitcher that Soroka is. He’s excellent at getting hitters out, but he is not a pitcher who misses bats. No, he gets outs by pitching to contact and forcing the batter to make weak contact that’s easy prey for one of the Braves’ fielders.

Twenty years ago, that would have made him an outstanding option for the Cy Young, because he’s the kind of pitcher who wins games and posts a low ERA. He’s also got exceptional control and will not beat himself. However, the game has changed, and voters are now more likely to punish a pitcher who is seen as relying too much on his fielders than they are to reward him. For Soroka to win this award, he’s going to need to have a truly fantastic season to make up for his lack of strikeouts.

That means he’s got to keep runs off the boards and post very high win totals. Wins don’t matter for most of the pitchers in contention for a win, but they do for Soroka. He’s only got a chance if the Braves repeat as NL East champions, and even then, everything has to go right for him to have a real shot. This is a very high-risk strategy with a rather high reward, but the risk might just be too great to trust such a young pitcher with your money.

The National League is packed with outstanding pitchers, and in a shortened season like this one, it’s a major challenge to figure out who’s going to stand out and who’s likely going to be fool’s gold. For me, it could be a mistake, but there’s just not enough of a sample size to trust Flaherty throughout however long this season plays out. We don’t know whether his incredible second half was him getting hot or him getting fortunate, and I don’t love the idea of making a season-long bet on someone I don’t yet trust when I have more proven commodities available.

For me, the best options are the guys who have been there before, and that means deGrom and Scherzer. Either is a great choice, but I lean more toward Scherzer in this situation. He’s been there before, and he’s had extra time to recover from the injury that plagued him late in the World Series. DeGrom has also been here before and has proven himself one of the game’s premier strikeout artists, but when Scherzer has been healthy, he’s been the man to lead the NL in strikeouts.

I think either of them could win the award, and in this shorter season, I like my chances with Scherzer. This might be his best remaining chance at adding another Cy Young to the trophy case, and even though he already has a Hall of Fame resume, he’s going to want to try to add that hardware one more time in the final few years he has left of his career. DeGrom is younger and has much more time to add to his cabinet. Scherzer doesn’t have time as a luxury, and that could pay off in a shortened season. I’d probably make a play on both of these NL East hurlers, but if you ask me to stick with one, I lean toward Scherzer.