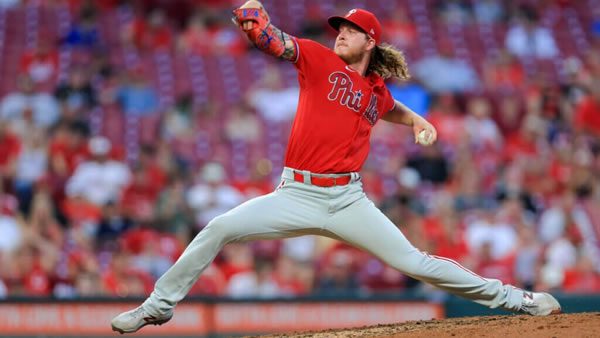 The Philadelphia Phillies host the Washington Nationals on Thursday, July 7th at Citzens Bank Ballpark. The first pitch in this matchup is scheduled for 4:10 ET. The MLB Odds Board places Philadelphia as the favorite (-186), with an OU line set at 10.

The Washington Nationals come into the game hoping to pull off another upset, as they took down the Phillies by a score of 3-2. Before the win, the team has dropped 6 straight games. This includes being swept in a 4 game series vs Miami. In last night’s win, Josiah Gray worked 6 innings, giving up just 2 runs and striking out 11 Phillies batters. Luis Garcia drove in 2 of the team’s 3 runs.

The Philadelphia Phillies will look to bounce back from yesterday’s 3-2 loss and pick up the series win vs Washington. In last night’s contest, Aaron Nola was cruising through the game before being tagged for 3 earned runs in the 8th inning. Philadelphia’s offense could only must 2 runs on 4 hits vs Josiah Gray and a combination of 3 Washington relief pitchers.

If Philadelphia hopes to pick up their 2nd straight series victory, they will need a win in today’s game. Previously, the Phillies took 2 of 3 games vs the Cardinals. Currently, Philadelphia sits 8 games behind the division-leading New York Mets.

This season, the Washington Nationals have continued to stick with Joan Adon, despite having a record of just 1-11 and ERA of 6.97. Adon will be taking the mound for the first time since June 17th. In that outing vs the Phillies, he gave up 4 runs across 5 innings. All season long, Adon has struggled with command, having just 50 strikeouts compared to 36 walks.

For the Phillies, left-hander Bailey Falter will take the mound with a record of 0-2 and an ERA of 4.88. So far, Falter has appeared in 8 games, 4 of which came as the starter. So far, he struggled with the long ball, giving up 6 home runs across just 24 innings of work. Currently, Falter has a WHIP of 1.42.

This year, the Nationals and Phillies have already met up for 7 games. So far, Philadelphia has dominated the series, going 5-2. However, Washington has been able to cover the runline in 4 of these contests. The over-under record in the series is 4-3.

Heading into today’s NL East matchup between Washington and Philadelphia, the Phillies are the heavy favorite to pick up the win. On the season, the Nationals have won just 1 time with Joan Adon as the starting pitcher. Look for Phillies bats to come to life vs the struggling young pitcher. I like Philadelphia to cover the runline.

Free MLB Pick: Phillies Runline. Bet your Nationals vs. Phillies prediction and ALL your MLB bets for FREE this week by taking advantage of a 100% real cash bonus on your first deposit of $100 to $300 when you use bonus code PREDICT100 at MyBookie Sportsbook through this special link!