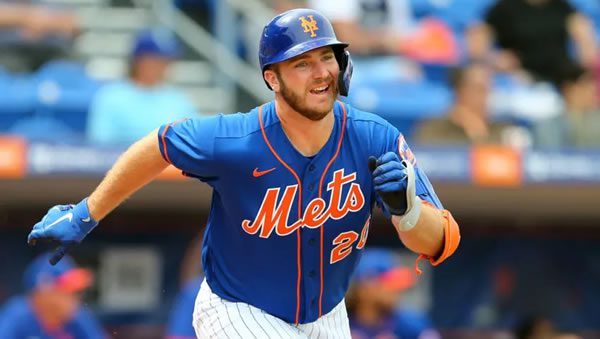 The Houston Astros host the New York Mets on Wednesday, June 22nd at Minute Maid Park. The first pitch in this matchup is scheduled for 02:10 ET. The MLB Odds Board places Houston as the favorite (-125), with an OU line set at 9.0.

The Mets are hoping to get back on track, after falling to the Astros, by a score of 8-2. New York’s pitching staff finished the game by allowing 10 hits, leading to 8 runs. Offensively, they finished with just 2 runs on 8 hits. The loss came as New York was the betting underdog, getting 125.0 on the moneyline. Together, the Mets and Astros combined to surpass the over-under betting line set at 9.0 runs. New York has had more than half of their games go over the over-under line (37-29-4).

The Mets are looking to continue adding wins, as they are 3-2 over their last 5 games. Over this stretch, the team has a positive run differential at +3. In their last 5 contests, New York is averaging 4.6 runs per game, right in line with their season average of 5.00. So far, New York has won over half of their 22 series played, going 16-4-2.

The Houston Astros are coming off a big win over the Mets by a score of 8-2. For the game, the pitching staff held the Mets to 2 runs on 8 hits. In the victory, the Astros came up with 10 hits and 8 runs. In the game, Houston was able to take care of business as they were the favorite at -145.0. So far, the team has won 66.0% of the games in which they were favored. In terms of the over-under, the Astros and Mets combined to surpass the line of 9.0 runs. Against the run total, Houston is just 22-44-1.

In their last 5 games, the Astros have put together a record of 4-1. Their recent success is backed by an average scoring margin of +17 (last 5). Overall, the Astros are averaging 4.31 runs per contest. But, over their last 5 outings, they have been scoring at a clip of 6.8 runs per contest. On the season, Houston has won more than half of their series, going 13-8-1.

Carlos Carrasco gets the start for the Mets, with an overall record of 8-2. So far, Carrasco has put together an ERA of 3.84. In his appearances leading up to today, he has lasted an average of 5.77 innings. Teams have been able to rack up runs against him, as he has a batting average allowed of 0.262. So far, Carrasco has managed to keep the ball in the ballpark, allowing just 0.72 home runs per 9 innings. Per game, Carlos Carrasco is averaging 5.77, on a strikeout percentage of 24.0%. Throughout the season, Carrasco has avoided walking batters, allowing just 1.92 per contest.

In today’s game, Houston turns to starter Luis Garcia. For the year, he has a record of 4-5. Garcia gets the start with an ERA of 3.41. On average, he has lasted 5.5 innings per appearance. Across his previous outings, opponents are batting 0.202 against Garcia. Despite a strong batting average allowed, Garcia is prone to giving up home runs, averaging 1.64 homers per 9 innings pitched. In terms of strikeouts, Luis Garcia has a strong K% of 26.0%, including a per game average of 5.75. Leading into the game, he has shown a strong command of his pitches, averaging just 2.45 walks per contest.

Today’s matchup between the New York Mets and Houston Astros will be their 2nd meeting of the season. Houston holds the edge in the series at 1-0. The over-under record in this series sits at 1-0. The average run total in these games is nan runs per game. In these matchups, the average scoring differential sits at 6.0 runs. When looking back to last season, New York and Houston split the season series, with each team picking up 0. The over-under record in last year’s matchups was 0-0, with the average run total being nan runs per game. The average scoring differential in this series was nan runs per game.

Heading into Wednesday’s matchup between New York and Houston, the Astros are the favorite to pick up their second straight win over the Mets. Look for Houston starter Luis Garcia to build on his last outing, in which he gave up just 1 ER while striking out 9 batters. I like the Astros on the moneyline.