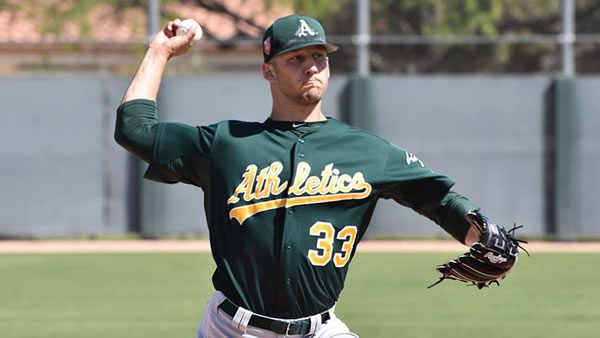 There’s no way to hide it now: the Athletics are in big trouble. Oakland was never going to have an easy time coming out of the AL West once the Astros got themselves going, but now the Athletics have let the Mariners back into the race and are quickly losing ground against Boston as well. Oakland now sits 1.5 games back of the second wild card, as they’ve already been caught and passed by the Yankees and never managed to catch the Red Sox, leaving them in a tight spot with both the Mariners and Blue Jays coming up fast behind them.

Meanwhile, the Yankees have played almost flawless baseball for the past month. On July 25, the Yankees left Fenway Park with a 51-47 record that left them closer to fourth-place Toronto than they took the AL East. Since then, the Yankees have gone 23-5 and come into this one riding an 11-game winning streak. New York hasn’t managed to move into first in the AL East because Tampa Bay has also been excellent, but the Yankees are now three games up on Boston for the first wild card and have put some real distance between themselves and the rest of the AL hopefuls. Opportunity is here in northern California for the Athletics to get back in this race, but they’ll have to turn it around in hurt to make that happen.

A look at the numbers reveals that the Yankees are actually nowhere near the usual idea of Bronx Bombers. At 547 runs, the Yankees rank 10th in the American League in runs and are more than 100 runs behind Tampa Bay’s AL East-leading offense. Yet the Yankees now have the third-best record in the American League, behind only the Rays and Astros.
The reason is pitching and defense. Bronx Blankers might be a more appropriate title for this New York squad because the Yankees’ 499 runs conceded is better than everyone in the AL except the White Sox, and the Yankees don’t get the benefit of facing the Indians and Royals 19 times a season. The only soft offense in the AL East that the Yankees get to deal with is the Orioles, like Tampa Bay, Boston, and Toronto all rank in the top five in the AL in runs.

But during this stretch of games, it hasn’t mattered who the opponent is: the Yankees just keep getting the job done. Over the past 11 games, New York has given up an average of 2.45 runs per game, allowing the Yankees to sneak by without putting up huge numbers.

Note: Football is back! Our writers are cranking out game previews on a daily basis! Be sure to check out our college football picks!

Ask the average professional baseball player their feelings about the Oakland Coliseum, and you’re probably going to hear a lot of adverse reactions. The place is considered badly outdated, and the Athletics have been asking for a new stadium that they’re highly unlikely to get for the better part of two decades now.

Ask anyone willing to bet the under on baseball, however, and you’re likely to get a much more positive view of the Coliseum. The Oakland Coliseum remains one of the most pitcher-friendly parks in the game, and betting on the under here has usually been a great strategy. It helps that the Athletics aren’t hitting much at all as of late, but the under has cashed in four of the past five in Oakland, and as long as the Athletics aren’t hosting Texas, the Coliseum is usually a better-than-average play for the tunde. The A’s have only scored 14 runs in their past five home games, so the conditions are set up well here.

Once again, it’s going to be a great day for baseball in northern California, with temperatures at 72 degrees at the first pitch and wind blowing at seven miles per hour toward center field.

With the Yankees getting close to even money and the Athletics really struggling to get any momentum going, I’m not going to overthink this one. New York is the hottest team in baseball right now, and Oakland isn’t showing any signs that it’s going to get itself back into a playoff spot.

I’m taking the Yankees here. Note: As mentioned above, college football is back! If you’re still laying -110 odds on sides and totals, PLEASE consider doing yourself a favor by checking out BetAnySports Sportsbook where you only have to lay -105 odds. Pencil out how much you bet per game by how many games you bet per season! Once you see how much you’d save paying less odds, it’s a NO-BRAINER to make the switch! Plus you help the site out as it keeps us afloat (which we greatly appreciate!) Click here to register for an account at BAS Sportsbook!