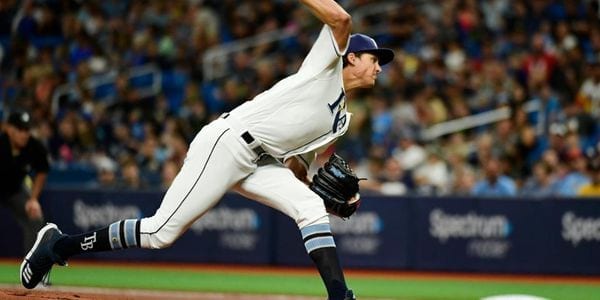 All Hands On Deck

An elimination game in baseball is like no other sport because there’s no guarantee that a starter is going to last even past the first inning in a winner-take-all situation. Cole and Glasnow are the scheduled starters, but if either one gets into trouble, there will be a very quick hook because there is no tomorrow for the losing team.

The pressure is especially high on the Yankees, who face the pressure of being the World Series favorites and of completing a decade without a world championship for the first time in their illustrious history. This is the game that Cole was brought on to pitch if necessary, and it’s safe to say that Aaron Boone will be expecting him to carry New York deep into the late innings. But if Cole struggles, Boone won’t hesitate, and that’s exactly what Tampa Bay will be trying to make happen.

As great as Glasnow is, he’s not Cole — but by the same token, neither is the Yankees’ bullpen anywhere as strong as the Rays. The longer the starters stay on the mound, the more the game favors the Yankees. If it becomes a bullpen game, Tampa Bay would have the edge.

Given what’s expected to happen in this game, you might not be able to get strikeouts as a bet, but if you can, you’ll want to bet on a high total. Both Cole and Glasnow are strikeout pitchers, and both are facing lineups that have been known to strike out regularly. The Yankees lead all teams in the postseason with 56 strikeouts, while Tampa Bay isn’t far behind with 45.

New York’s strikeouts are in large part because of the quality of opposing pitchers they’ve faced (they opened with Cleveland, which led the majors in strikeouts by their pitchers in the regular season), while the Rays just happen to swing and miss pretty regularly. Tampa Bay was the only team in the majors to strike out at least 600 times this year, so if you can get a good number on Cole’s strikeouts, it’s worth taking. Remember, you’ll be taking a risk that Cole goes deep into the contest, but if he doesn’t, the Yankees aren’t going to be doing much of anything anyway.

Deciding games in baseball are often very different from the NBA or the NHL. In basketball, if you were smart, you opted for the under in a winner-take-all game, because what usually happens in that sport is that teams put a high emphasis on defense and the pressure of shooting a clutch shot usually gets to all but the steeliest competitors.

Not so in baseball, where high scores tend to be the norm in an elimination game. That’s because the team with the ball is on defense, and the pitcher is the one dealing with the pressure. Plus, the trailing manager has to go for broke in the later innings, which can push extra runs across. This game features a low total because the public’s going to see Cole vs. Glasnow, but that’s something that can be exploited. Odds are, one or both of them won’t be around by the seventh inning, and that means runs.

Weather won’t play much of a factor, with temperatures at 75 degrees and the wind topping out at about three miles per hour.

The Yankees are favored here because of Cole, but if the Rays can get to him, they’ll have the advantage. Tampa Bay will likely send Blake Snell to the mound after Glasnow, and beyond them, the Rays have an outstanding bullpen that can make life very difficult for New York. The Yankees don’t have anything like that, and their bet is basically Cole gets the job done, or things go horribly awry for them.

I think this will be a great game, but I’m not interested in paying juice on the Yankees in this situation. Give me the Rays as a live dog here. Bet this game and ALL your bets at reduced odds (Walmart style pricing) at BetAnySports, home of -105 sides and totals for football and hoops as well! Betting on games at reduced odds saves you money every time you place a wager and trumps ANY signup bonus or reload bonus offered, even 100% bonuses. Click here to start saving big bucks today!