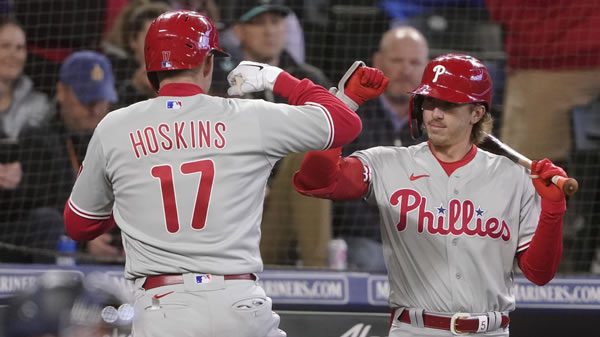 The Philadelphia Phillies host the San Diego Padres on Thursday, May 19th at Citizens Bank Park. The first pitch in this matchup is scheduled for 01:05 ET. The MLB Odds Board places Philadelphia as the favorite (-120), with an OU line set at 8.0.

The Padres are hoping to get back on track after falling to Philadelphia, 3-0. Despite the loss, San Diego’s pitching staff gave up only 3 runs on 5 hits. On offense, the Padres finished with 4 hits. San Diego’s loss came as the underdog, getting 135.0 on the moneyline. t Together, Padres and Philadelphia stayed below the OU line set at 7.5 runs. With this result, San Diego’s over-under record dropped even further, moving to just 18-19-0.

Philadelphia will look to keep things rolling in today’s game, as they most recently took down Padres by 3 runs 3-0. In the winning effort, the team’s pitchers held the Padres to no runs and 4 hits. The Phillies’ offense ended the game with just 3 runs on 5 hits. In the game, Philadelphia was able to take care of business as they were the favorite at -150.0. So far, the team has won 48.0% of the games in which they were favored. Combined, the Phillies and the Padres’ run total fell below the OU line of 7.5 runs. Even still, Philadelphia games have still gone over the betting total over half of the time, at (19-16-2).

In their last 5 games, the Phillies have put together a record of 3-2. During this time, the team’s run differential sits at 6. Philadelphia is averaging 5.4 runs per game over their last 5, compared to a season-long mark of 4.73. Philadelphia has a below .500 series record of just 4-7-1.

Yu Darvish gets the start for the Padres, with an overall record of 3-1. To date, Darvish has an ERA of 4.62 while lasting an average of 5.57 innings per appearance. Darvish comes into the game with a batting average allowed of 0.235. Opposing batters are hitting for power at a below-average rate against Darvish, as he is allowing just 0.92 per 9 innings. Per game, Yu Darvish is averaging 4.57, on a strikeout percentage of 20.0%. For the season, he has struggled with command averaging 2.54 walks per outing.

The Philadelphia Phillies will send Kyle Gibson to the mound with an overall record of 3-1. So far, Gibson has put together an ERA of 4.1. In his appearances leading up to today, he has lasted an average of 5.3 innings. So far, Gibson has a batting average allowed of 0.232. Opposing batters are hitting for power at a below-average rate against Gibson, as he is allowing just 0.97 per 9 innings. Per game, Kyle Gibson is averaging 4.285714285714286, on a strikeout percentage of 20.0%. Command has been a problem for Gibson, as he is giving up 3.13 walks per outing.

Today’s matchup between the San Diego Padres and Philadelphia Phillies will be their 2nd meeting of the season. So far, the teams have each won 1 time. Through 2nd games, the series’ over-under record is 0-2, with the average run total sitting at 8.33 runs per game. In these matchups, the average scoring differential sits at 3.0 runs. Philadelphia won last year’s head-to-head series grabbing 4 wins to 2. In these 6 meetings, the two teams combined for an over-under record of 2-4. Last year, the Padres and Phillies averaged 8.33 runs per game. The average scoring differential in this series was 3.0 runs per game.

Statistically, starting pitchers Kyle Gibson and Yu Darvish are having very similar seasons. So far Gibson has the edge in ERA, but Darvish has a slightly better FIP of 3.78. However, between the two teams, Philadelphia’s batters have been much better against right-handed pitching. I recommend taking the Phillies on the moneyline.