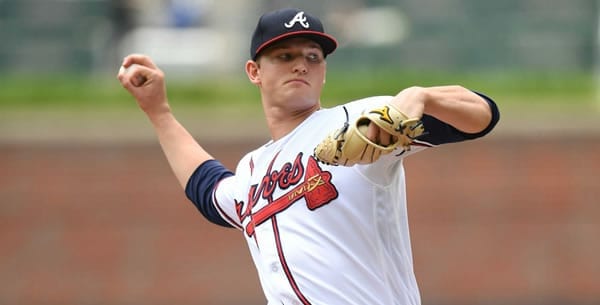 After splitting the first two games of this three-game NL East series Philly and Atlanta meet for a rubber match Thursday evening. All-Star Mike Soroka hits the hill for the Braves, and they’re posted as solid 8/5 favorites. How are we betting this game with our free MLB pick?

Thursday’s MLB betting odds opened Atlanta and Soroka at around -170 over Philly and Eflin, with an over/under of 10 runs. Early betting action then dipped that line down to about -160 depending on the betting site and bumped that total to 10.5.

The Braves could also be found getting around +115 giving the run and a half against the MLB run line.

The Braves only led Wednesday 3-2 into the bottom of the sixth inning but put up a six-spot to pull away.

With Wednesday’s loss, Philadelphia is still 6-3 over its last nine games.

With Wednesday victory Atlanta is 5-3 over its last eight games.

At 51-36 overall the Braves lead the NL East by 5.5 games over the 45-41 Phillies. Atlanta also trails the Dodgers by 7.5 games in the battle for the best record in the National League, but it leads Milwaukee by five games for the No. 2 spot.

Philly, meanwhile, also leads the NL wild-card race, but only by a half-game over both Washington and the Cubs.

Philadelphia leads the season series with the Braves five games to three.

Soroka, by our strict standards, is 9/14 on quality starts this season but only one for his last four. Last Friday he held the Mets to two runs and seven hits through 6 1/3 innings of a 6-2 Atlanta victory. But over his three starts previous to that he allowed eight runs and 17 hits through 13 innings.

This will be Soroka’s first-ever start against Philly, which could give him an edge, at least for the first couple of times through the lineup.

Eflin is 9/16 on quality starts this year but 0 for his last two. Last Saturday he held Miami to three runs on eight hits and one walk through six innings of a 9-6 Phillies loss, but we don’t count that as a “quality” outing because it’s a 4.50 ERA and a 1.50 WHIP. And just before that he gave up six runs and 11 hits, including three homers, through five innings against the Mets, although Philadelphia won that game 13-7.

On the season Philly is 7-9 with Eflin, 1-3 over his last four starts.

Over three career starts against Atlanta Eflin has allowed just four runs through 23 innings. But his most recent start against the Braves came back in August of 2017, and that’s kind of already a long time ago.

Philadelphia is batting .238/.320/.413 against right-handed pitching this season.

Atlanta is batting .262/.338/.459 against RH pitching this season, which ranks this lineup among the top half-dozen in the Majors in this split.

The Phillies bullpen owns a 4.82 ERA this season and a 1.48 WHIP while allowing an .813 OPS. Numbers like those “help” this unit rank among the bottom half-dozen bullpens in Baseball at the moment.

We give Atlanta the check-marks in the pitching match-up, with the sticks, and in the bullpen comparison, so we’re going with the home team here. And in chasing a better price, we’ll give the run and a half and bet the Braves against the run line.