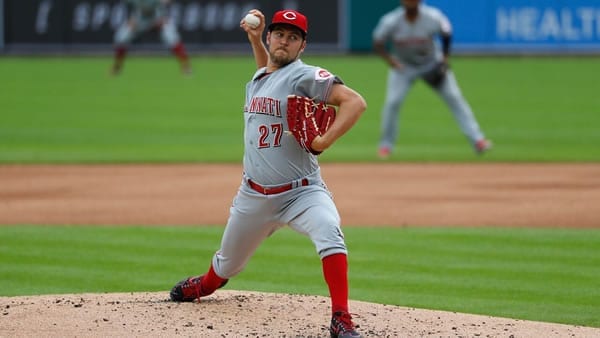 The Reds have to be thrilled that they won’t be seeing any more of the Cleveland pitching staff. Cincinnati was already having problems plating runs against the Indians, scoring just five runs in the first two games against Cleveland. But when the teams shifted their series to northeastern Ohio, the Reds’ offense completely failed to make the trip up Interstate 71, failing to score a single run in 18 innings in Cleveland.

The problem for Cincinnati is that the Reds have really struggled to generate much offense of any kind. Cincinnati is built as a power team, but lately, the Reds’ situation has been home run or nothing. Cincinnati hits just .198 as a team, third-worst in the majors, and 35 of the Reds’ 79 hits this season have either been a double or a home run. This is not a team that can generate offense if the ball doesn’t leave the yard, and against Cleveland, the ball wasn’t going anywhere.

That’s a real problem against Milwaukee, as the Brewers have allowed just 13 home runs all season, ranking 11th in the majors. In order to get the offense going again, Cincinnati is going to have to find some other source of power besides Nick Castellanos. The Reds have been able to count on his bat, as Castellanos hits .333 and has hit safely in 12 of 13 games this year. But the next best average among the Reds’ regular starters is Joey Votto, who’s hitting just .237. If Cincinnati is going to get into this race in the NL Central, it’s got to generate some runs.

To be fair, the Brewers should have had six chances to win in Wisconsin by now. However, the Cardinals got infected with COVID, and their four-game series in Milwaukee was canceled, leaving the Brewers with a mere two home games to this point in the campaign. Milwaukee lost both of them to the White Sox before turning around and winning a pair on Chicago’s South Side.

While power has been the one thing that the Reds have done well this year, the Brewers have been the exact opposite. Milwaukee has really struggled to hit anything more than singles, as it has just eight home runs on the season and ranks 27th in the majors in total bases. A large part of that has been because Christian Yelich is hitting just .111 so far, a far cry from the kind of offense Milwaukee normally expects from him.

The pitching is what has kept Milwaukee in games to this point. The Brewers’ WHIP ranks seventh overall, and Milwaukee ranks 14th in the majors in strikeouts despite getting four games called off because of COVID. Given the Reds’ struggles at the dish, this looks like it could be the absolute wrong opponent for them to face right now.

With a lack of offense and a shaky bullpen behind him, the strategy is clear for Trevor Bauer. Last, as long as he can and give his team a chance to pull out a win. Bauer has been brilliant this season through two appearances, as he’s allowed just four hits and given up one run on a solo home run for the year. In 13.1 innings, he’s notched 20 strikeouts.

But there’s a bit of an asterisk on that, as Bauer has yet to face anybody but the Tigers. Detroit obviously can’t hit him, but he’s never faced the majority of the Milwaukee hitters. He has had trouble getting outs against Milwaukee’s Avisail Garcia and Logan Morrison, who own a combined .314 batting average against Bauer. If Bauer struggles, it’s difficult to see how the Reds can win.

It projects to be a chilly night in Wisconsin, with temperatures at 59 degrees.

The offense is going to come eventually for Cincinnati, but I don’t think it’s going to happen here. The Reds aren’t a great matchup for the Brewers, who tend to excel at keeping runs off the board and did just shut down the White Sox, who own the best batting average in the majors and have shown just as much power as Cincinnati.

If the White Sox couldn’t solve the Brewers when they came in as the best hitting team in the majors, it’s difficult to see how the struggling Reds can do it. I’ll take Milwaukee as a small home underdog, and I like the under as well. Triple up on this bet by depositing $25 at Intertops Sportsbook and they will give you an extra $50 making your initial betting account balance $75! Must use bonus code: ROOKIE200 to receive the bonus. Go here to sign up now!