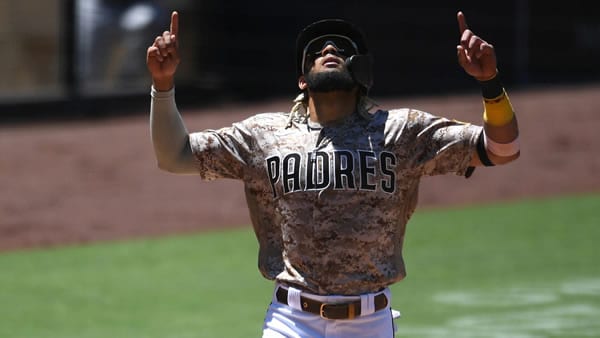 After taking Game 1 of this first-round National League playoff series Wednesday, the Cardinals shoot for the series victory Thursday, as these teams meet for Game 2 in San Diego. St. Louis was listed as a +160 underdog to win this series before it started, so those holding Cardinals tickets must be very happy at the moment. Can St. Louis put the Padres away? Can San Diego stay alive? And how are we playing this game with our free MLB pick?

MLB playoff betting odds opened the Padres and Zach Davies around -165 over the Cardinals and Adam Wainwright, with an over/under 8.5 runs. Both those figures were holding steady in the early betting action.

St. Louis took the opener of this series Wednesday night 7-4, cashing in as a +145 underdog on the MLB playoff betting odds. The Cardinals took the lead for good right away, plating four runs in the first inning, tacked on a couple more in the third, and held on from there for the victory.

San Diego had a chance to make things very interesting, scoring once in the sixth inning to pull within 6-4, but one runner got thrown out at third base, and Fernando Tatis struck out with two on, fizzling the rally.

Wednesday’s game also played over its total of 8.5 runs.

St. Louis finished the regular season by taking three of five games in an all-important series against Milwaukee. The Padres, meanwhile, finished with three straight wins over San Francisco.

These teams did not meet during the abbreviated 2020 regular season. Last year the Padres took the season series from the Cardinals four games to two.

Davies, by our stringent accounting, is just 3/12 on quality starts this season and 0 for his last four. Last Saturday, he threw three scoreless innings against San Francisco, allowing three hits, walking none, in a 6-2 San Diego win. But over his three starts previous to that, he gave up nine runs on 20 hits, including five home runs, through 18 innings.

On the season, the Padres played 8-4 with Davies, but only 1-2 over his last three starts.

In two starts last season against St. Louis, while still with Milwaukee, Davies allowed four runs and ten hits through 9 2/3 innings. Thanks to poor run support, the Brewers lost both those games.

On the season, the Cardinals are 6-4 with Wainwright, but 0-2 over his last two starts.

In his most recent start against San Diego, back in April of 2019, Wainwright allowed just one run and five hits through six innings of a 4-1 St. Louis victory.

St. Louis batted .235 against right-handed pitching this season, with a .324 team OBP and a .366 team slugging percentage.

San Diego batted .259/.337/.478 vs. RH pitching this season. Numbers like those helped this lineup rank among the top three or four in the Majors in this split.

We’re calling the pitching match-up a push, as well as the bullpen comparison. And while San Diego might own an edge with the sticks, it’s not enough to warrant so high a price. Betting baseball is all about betting value, and we like the value here with underdog St. Louis.