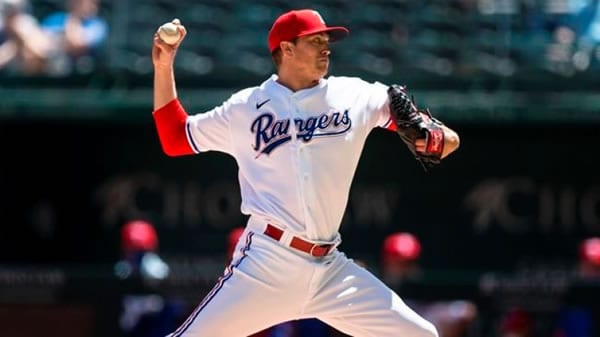 You’re supposed to win the majority of your home games, but the Rangers and Astros have made an art form out of that here in the early going. So far, the teams have faced each other seven times in 2021, and on all seven occasions, the home team has emerged victorious.

So far, it’s been a little closer in Houston than it has in Arlington, as the Astros claimed two of their four wins over the Rangers by a single run. The most recent of those home wins wasn’t by one run, but it was rather frustrating for Rangers’ starter Kyle Gibson. Gibson pitched well enough to get a win in that game, going seven strong innings and leaving with the scored tied at 2. But the Rangers’ bullpen fell apart at the worst possible time, giving up four runs in the bottom of the eighth to allow Houston to coast to a victory.

One reason the total is as low as it is is because of Gibson, who is experiencing a major renaissance in his career at age 34. Gibson has built a steady career for himself in Minnesota and Texas, but he’s never been anywhere close to this level of success, as his ERA is down to 2.13, roughly 1.5 runs per nine innings better than his previous career-best mark. Compared to his most recent season in Texas, Gibson has shaved off more than three runs per game from his ERA and appears to be a much stronger pitcher than he was in 2020.

Unlike most pitchers who have stepped up their game in the post-pandemic era, Gibson’s increased performance isn’t based on getting to face hitters who are more concerned with their home run totals than they are with putting the ball in play. Gibson has always been a powerful pitcher, but his strikeout totals per nine innings have actually gone down compared to his past two seasons of action. Instead, it’s because Gibson has moved to a more pitcher-friendly park in Texas and because he’s kept the ball in the park. For the year, he’s given up a mere five home runs in 58 innings.
Get dimelines plus reduced juice on totals and runline bets at BAS!

In this matchup, the big wild card is whether Lance McCullers will be back to his old self after a sore shoulder knocked him out of action three weeks ago. McCullers hasn’t pitched since May, and his two most recent appearances were both against the Rangers. Texas didn’t solve McCullers at all in the first matchup in Houston, as McCullers scattered five hits and didn’t allow a single run in that start. In his second time against the Rangers, McCullers wasn’t quite as sharp, but he still kept his team close by holding the opposition to three runs before watching the bullpen collapse.

ith what Houston has done at the plate recently, it might not matter as to how well McCullers does or doesn’t do as long as he keeps the opposition below ten runs. The Astros currently lead the majors in runs per game and batting average, in part because they have feasted on their recent competition, scoring 22 runs in three games against Minnesota. However, all of that came away from home, as they’ve failed to score more than five runs in each of their past three home games.

Given that the temperature will be at 90 degrees and the conditions will make it feel like 97 degrees at first pitch, expect the Astros to close the roof. If it does stay open, winds will blow at six miles per hour toward left-center.

Texas has been truly awful away from Arlington, and Houston seems to be well set up to keep those struggles going. The Rangers have won just ten times in 33 contests outside of the Dallas Metroplex, and given that none of them came against the Rangers, there’s really not any real reason to trust them over an Astros squad that just mashed the ball against Minnesota and should be riding that wave of confidence.