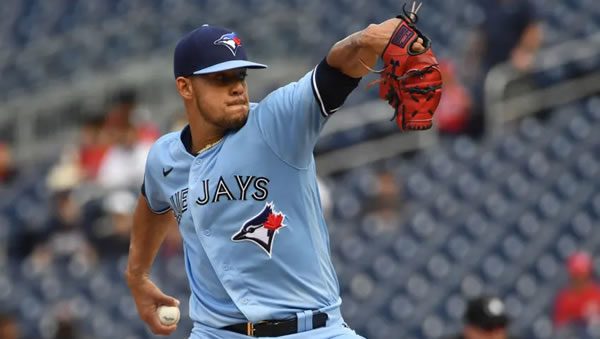 The Toronto Blue Jays host the Chicago Cubs on Monday August 29th at Rogers Centre. The first pitch in this matchup is scheduled for 07:07 ET. The MLB Odds Board places Toronto as the favorite (-220), with an OU line set at 9.5.

Chicago heads into today’s action, looking to rebound from a 9-7 loss to Milwaukee. On their way to giving up 9 runs, the Cubs staff allowed 16 hits. On offense, the Cubs 11 hits and 7 runs ended up not being enough to pull out the win. The loss came as Chicago was the betting underdog, getting 155.0 on the moneyline. With the over-under line set at 8.5 runs, the Cubs and Milwaukee combined to go over this total. Even with this game going over the total, Chicago still has an over-under record of just 56-64-8.

The Cubs will be hoping to pick up a win in today’s matchup, as they have gone just 2-3 over their last 5 games. This mark has come on an average run margin of just -7. During this stretch, the offense is averaging 4.2 runs per game, similar to their season-long average of 4.13. Chicago’s overall series record is just 17-19-5.

Toronto is coming off a 5 run loss to the Angels. Dropping the game 8-3. On their way to giving up 8 runs, the Blue Jays staff allowed 13 hits. With their 9 hits, the Blue Jays could only plate 3 runners. Leading into the game, Toronto was the betting favorite at -250.0. So far, the team has won 56% of the games in which they were favored. The Blue Jays and Angels went over the run total line set at 9.0 runs. For the season, the team’s over-under record is 65-60-1.

In their last 5 contests, the Blue Jays have just 2 wins, going 2-3. During this time, the team has a run differential of -17. The team’s offense is partly to blame for their recent slump, as they have averaged just 2.4 runs over their last 5 game. On the season, Toronto has won more than half of their series, going 19-15-6.

For the Cubs, starting pitcher Javier Assad has yet to factor into a decision. In his previous outing, Assad went 4 innings without giving up a run. Against the Cardinals, the rookie gave up 4 hits while striking out 3 batters. Chicago went on to win that game 2-0.

Toronto will roll with José Berríos (9-5) as their starter. Berríos gets the start with an ERA of 5.28. On average, he has lasted 5.37 innings per appearance. Compared to other starters, the right-hander has a high BA allowed of 0.277. Opposing hitters are hitting home runs at an above-average rate against Berríos. This year, he is allowing 1.81 HR’s per 9 innings pitched. Per game, José Berríos is averaging 4.92, on a strikeout percentage of 21.0%. Command has been a problem for Berríos, as he is giving up 2.21 walks per outing.

Today’s matchup between the Chicago Cubs and Toronto Blue Jays will be their first meeting of the season.

Heading into Monday’s interleague showdown between Chicago and Toronto, the Blue Jays are the heavy favorite on the moneyline. Even though rookie Javier Assad didn’t give up a run in his first outing, he only lasted 4 innings and dealt with plenty of traffic on the basepaths. Look for Toronto to get to Assad early and often. I like the Blue Jays on the runline.