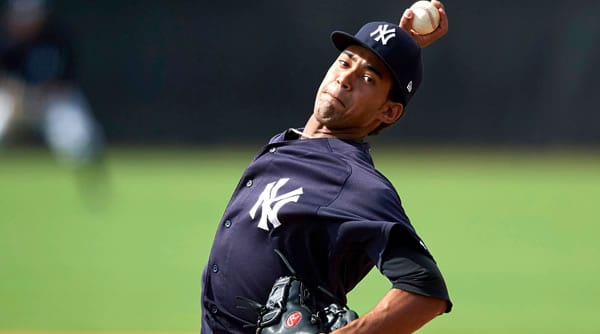 After banging their way toward victory in Game 1 of this best-of-five American League divisional-round playoff series Monday night, the Yankees shoot to go up 2-0 on the Rays when the teams meet for Game 2 Tuesday night out in San Diego. How are we playing this game with our free MLB pick?

Game 2’s MLB betting odds opened Tampa and Glasnow at around -125 over New York and Garcia, with an over/under listed at eight runs. Both those figures were holding steady in the early betting action.

Tampa is the home team for the first two games of this ALDS, based on the better records – 40-20 to 33-27 – during the regular season. But New York took the opener Monday night 9-3. The Yankees trailed 3-2 through four innings, took the lead on a pair of solo home runs in the fifth, then iced the game with five runs in the ninth, four coming on a grand slam by Giancarlo Stanton, New York’s fourth dinger of the night. The Yanks won Monday as -155 favorites on the MLB betting odds and covered against the run line at a price of +110. Also, Monday’s game played over its total of seven runs when New York exploded in the ninth inning. The Rays took the season series from the Yankees this year eight games to two, although several key New York sticks missed several of those games. Tampa advanced to this ALDS by sweeping two games from Toronto last week, allowing just three runs total. Meanwhile, New York advanced by sweeping two games from Cleveland last week, scoring 22 runs in the process.

Glasnow, by our strict standards, is 4/12 on quality starts this season, but two for his last two. Last Wednesday, in Game 2 of that AL wild-card series against Toronto, Glasnow held the Blue Jays to two runs and six hits through six innings of an 8-2 Tampa win. And over his last three starts, he’s allowed just five runs and 13 hits, although five of those left the yard, through 17 innings, with four walks and 26 strikeouts. On the season, the Rays are 10-2 with Glasnow, 9-0 over his last nine starts! Over three starts against New York already this season, Glasnow allowed six runs and nine hits through 14 1/3 innings, with seven walks and 22 whiffs. Tampa won two of those three games. Rookie righty Garcia is 3/6 on quality starts this year but 0 for his last two. Two Saturdays ago, in his previous regular-season outing, he gave up four runs and seven hits through 6 2/3 innings, with one walk and seven K’s, in an 11-4 Yanks win over Miami. And six days before that, he got nicked for six runs and eight hits through just three frames of a 10-2 New York loss to Boston. On the season, New York is 4-2 with Garcia, and he can take some credit for that. This will be Garcia’s first-ever start against the Rays, which could give him an edge, at least for the first couple of times through the lineup.

New York batted .254 against right-handed pitching this season, with a .350 team OBP and a .461 team slugging percentage. Numbers like those help this lineup rank among the top five in the Majors in this split, and that’s even with several big Yankee bats missing a bunch of games this season. Tampa batted .238/.324/.415 vs. RH pitching this season.

We give Tampa edges in the pitching match-up and in the bullpen comparison, but New York’s mashing the ball right now, and it’s getting an underdog price. We’ll take the Yanks and that price for our free MLB pick on Game 2.