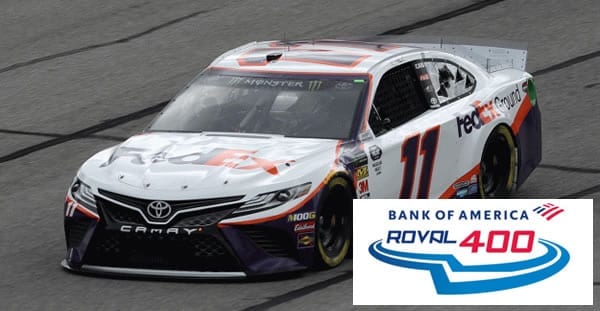 If Martin Truex Jr. hasn’t made it known yet, maybe a win at Richmond will enforce it. He is clearly a force to be reckoned with in terms of being a championship contender. Truex won this past weekend at RIR after passing Kyle Busch with 25 laps to go. Not only did he just win. This is his second consecutive Chase win. There have only been 2 Chase races. Apparently, he’s not leaving anything on the table for anyone else. Perhaps what’s even more impressive is that he came back after being spun on lap 87 by Ricky Stenhouse Jr. to take the lead back from Kyle Busch. Truex managed to only fall to 3rd place after being spun and worked his way back to the bumper of Busch to take the lead over for the win when it mattered most.

If that wasn’t impressive enough in and of itself, the Gibbs drivers finished the race taking 1-2-3-4 spots. Winner Martin Truex Jr. was followed by second-place Kyle Busch, third place Denny Hamlin, and fourth place Erik Jones. Coach Gibbs was beaming with excitement, which was obviously to be expected. It was evident that his teams were the class of the field all night long. Although Kyle Busch ended up second this weekend, he didn’t throw a fit. He admitted that his teammate was stronger from the beginning and he knew that Truex earned the win fair and square. I think it’s easier for Kyle to admit defeat when it’s a teammate for some reason. Overall, Truex swept Richmond this year. Ironically, he’s never won at this track before, but I guess you don’t until you do. Polesitter Brad Keselowski rounded out the top five. Both Kyle Busch and Kevin Harvick are guaranteed into the next segment based solely on points, so that certainly takes a load off their shoulders. The one driver in a heap of trouble is Erik Jones.

Although he passed pre-race inspection, he failed post-race inspection. He initially finished 4th, but NASCAR took his finish and moved him to 38th after failing post-race inspection. I’m not so sure how I feel about this being that NASCAR hasn’t proven that his failure was a mechanical anomaly versus cheating. Cheating? Absolutely take his position. But if something gave on the car during the race, NASCAR is messing with the Chase yet again. There’ve been plenty of times where the winner fails post-race inspection, but NASCAR doesn’t take the win. That’s not necessarily consistent in my opinion anyway. But, hey, what do I know? I’m just a fan.

This weekend, the drivers and teams are headed to Charlotte for some good old road racing at the intermediate track. Charlotte will prove to be a pivotal race as it’s the last race in the first segment of the Chase. With Jones now sitting 45 points behind the cutoff line, there’s no way for him to make it in the next segment without a win. That’s a tall order. It’s an exceptionally tall order being that the drivers are racing the Roval instead of the oval. Quite frankly, this is going to be a really awesome race. There are drivers with nothing to lose, drivers with everything to lose, drivers desperately needing a win and it’s all going down on a road course. You can’t ask for much better than that. This road course is a 2.28-mile asphalt track. There are 17 total turns, more than what we’re used to seeing in the other NASCAR road courses of Sonoma and Watkins Glen. The Roval gave us a really great race last time, and I expect this weekend to be no different. The drivers will be battling obviously tires and track position as they make all sorts of moves across this track. Depending on how long the runs go, fresh tires are crucial to maintaining track position and also to not get caught and run over on the longer runs. The drivers will also likely be playing with fuel strategy since road courses lend themselves to varying pit strategies throughout the race. Many teams will choose shorter runs versus longer runs depending on the track variables, ultimately changing fuel strategies for many teams.

Looking at our potential winners, we are going to see two major contenders, and those are the two major contenders from Richmond. Martin Truex Jr. nearly won this race last year prior to being involved in a wreck with none other than Jimmie Johnson late in the race, allowing Ryan Blaney to beat them both. Truex is quite the wheelman on the road courses anyhow, so don’t be surprised to see him leading the pack. Although he’s going to be great here, I think that his teammate is looking for a little redemption in terms of a win. Busch has six top-five finishes in his last eleven road course starts. That’s not too shabby. And Busch isn’t going to let Truex have all of the glory. I think that the Gibbs drivers will all have really great runs again this weekend. Denny Hamlin is one of the best at road courses. He matches six top 5 finishes that Kyle Busch has but in just nine total starts. That’s pretty sharp. Erik Jones has five top-ten finishes in the last seven road course starts. That’s not too bad whatsoever for a rather inexperienced driver. Let’s take a look at your potential winners this weekend at the road course:

Favorite: Kyle Busch (5-1) These odds can be found at MyBookie Sportsbook, where credit cards work for deposits and where you’ll receive a generous 100% bonus (free bets) up to $1000 on your first deposit!

I think that Jones is going to fight hard this weekend. Blaney showed last go around that it’s possible for a rookie to win. There might’ve been a lot of luck on his side, but it doesn’t matter what it is as long as you get to the checkered flag first. If Jones can stay out of trouble, make strong moves, and be consistent this weekend on and off pit road, he might have a shot. Clint Bowyer is going to be another driver looking for a win as he is on the bubble. With just four points standing between him and the next segment, Bowyer is going to be racing hard and making all the moves; I anticipate him being a driver on the move this weekend. If he can’t get to the front of the pack, you better darn well believe that he’s going to get as far to the front as he can. With both of these drivers carrying 20-1 odds, they may not be favorites, but they’re not total losses either. They’re better than 75% of the field and offer a good payout if you put some chips on either one. At 5-1 odds, both of these guys are going to be chasing Kyle Busch. While Busch is still not the favorite with Truex at 11-4 odds, Busch is looking for a win for the principle of the matter at this point. It will also help him in the points when all is said and done. Here are your top 16 drivers, soon to be 12, after Richmond:

Alex Bowman is sitting just 2 points outside of the top 12. While that may be the case, I think that there are a couple of drivers directly behind him that are going to be stronger contenders and race just a little harder. I also believe that their experience will allow them to surpass Bowman and take Byron out of the running as well. Only time will tell, though, but this road course is going to be a heck of a battle. Stay tuned for an absolutely exciting road course race this weekend at Charlotte Motor Speedway! Where are you betting the race? You can bet it for FREE at GTBets by taking advantage of their GIANT 100% bonus up to $500!