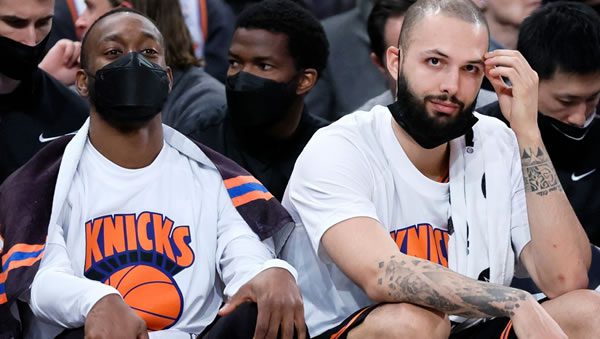 The New York Knicks host the Atlanta Hawks in an Eastern Conference matchup. Tip-off is set for 07:30 PM ET at the Madison Square Garden.

The Atlanta Hawks come into this game with an overall record of 35-36, placing them 10th in the Eastern Conference. Throughout the season, Atlanta has struggled in their 34 road contests, sitting at 12-22. Over their last five games, the Hawks have played well, picking up 3 wins. During this stretch, Atlanta is averaging 118.0 points per game, 5.0 points more than their season average of 112.9. This uptick in offensive play has come while playing a group of opponents who are collectively giving up 112.0 points per contest. Even though Atlanta has been picking up wins, their opponents have had no trouble scoring the ball, averaging 116.0 points per game, up from the Hawks’ usual rate of 112.1. In the Atlanta Hawks’ most recent game, the team fell to New Orleans by a score of 117-112.

The New York Knicks come into this game with an overall record of 30-41, placing them 12nd in the Eastern Conference. Throughout the season, New York has struggled in their 35 home contests, sitting at 15-20. Over the Knicks’ last five games, they have picked up just 2 wins. In this stretch, New York’s offense is scoring right in line with their season average, putting up 108.0 points per game. Combined, the Knicks’ last five opponents are giving up 111.0 points per contest. In this recent cold stretch, the Knicks are allowing an average of 106.0 points per game, similar to their usual rate of 106.8. In the New York Knicks’ most recent game, the team fell to Utah by a score of 108-93.

As Atlanta travels to take on the New York Knicks, the Hawks’ leading scorer is Trae Young. Through 64 games, Young is averaging 27 points. On the season, he has surpassed his season average in 53.0% of his games. So far, the Knicks are allowing their opponent’s top scorer to surpass their season average in 48.21% of their games, placing them 15th among NBA defenses. On the other side, Julius Randle leads the Knicks in scoring, averaging 20 points across his 69 games. Throughout the season, Randle has outscored his season average in 48.0% of his outings. However, if he hopes to add to this total, Randle will need to do so against a Hawks defense that has been tough on their opponent’s top scorers. So far, leading scores have surpassed their season average at a rate of just 46.55%. This figure is good for a rank of 10th in the league.

The Hawks come into this game as the more efficient offensive team, averaging 112.2 points per 100 possessions. When playing as the superior offensive unit, Atlanta is winning at a rate of 36%. These victories are coming by an average margin of 11.0 points. On the other side, the Knicks hold the advantage on the defensive end of the floor. So far, they have played 25 games as the better defensive team, picking up 11 wins (44%).

Heading into today’s matchup, the Atlanta Hawks and New York Knicks have met up for three games. In their last meeting, New York picked up a 117-108 win.

How the Public is Betting the Hawks vs Knicks

67% are betting the Hawks against the spread.
52% are wagering on the game to go over the posted total of 225.5

This matchup between Atlanta and New York features one of the tighter spreads of tonight’s NBA slate, with the Hawks sitting as 1.5 point road favorites. Between the two units, New York has the advantage on defense, as Atlanta has had their share of problems defending the three-point line. Look for this to be a problem vs a Knicks offense, ranked 11th in three-pointers attempts despite ranking 23rd in overall shots from the field. Look for the Knicks to cover this spread at home. Bet your Atl/NYKpick and ALL your NBA bets for FREE this week by taking advantage of a 100% REAL CASH bonus on your first deposit of $100 to $1000 at Betnow Sportsbook! It’s the biggest real cash bonus you’ll ever find from a legit online sportsbook!