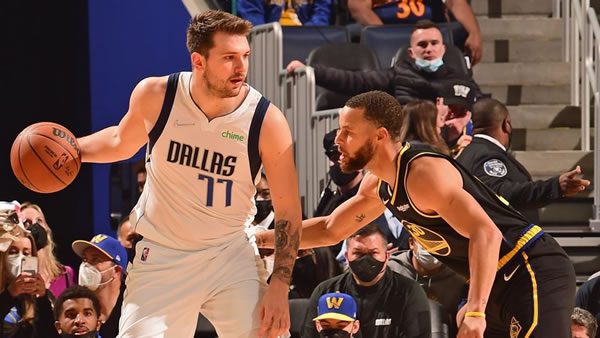 The Golden State Warriors host the Dallas Mavericks in a second-round Western-Conference matchup. Tip-off is set for 09:00 PM ET at the Chase Center.

The Dallas Mavericks come into this game with an overall record of 52-30, placing them 4th in the Western Conference. So far, Dallas is above .500 on the road, holding a record of 26-22. Over their last five games, the Mavericks have played well, picking up 4 wins. In this stretch, Dallas’s offense is scoring right in line with their season average, putting up 106.0 points per game. Combined, the Mavericks’ last five opponents are giving up 108.0 points per contest. Dallas comes into this game also playing well defensively, holding their opponents to just 96.0 points per game. An improvement on their season average of 104.3. In the Dallas Mavericks’ most recent game, Dallas took down Phoenix by a score of 123-90

As Dallas travels to take on the Golden State Warriors, the Mavericks’ leading scorer is Luka Doncic. Through 67 games, Doncic is averaging 28 points. On the season, he has surpassed his season average in 42.0% of his games. Against the Warriors, Doncic will need to be on top of his game as Golden State is allowing their opponent’s top scorer to surpass their average in 40.0% of their games, placing them in the top 10. On the other side, Stephen Curry leads the Warriors in scoring, averaging 25 points across his 64 games. Throughout the season, Curry has outscored his season average in 45.0% of his outings. Given that Dallas’s defense has struggled to slow down their opponent’s top scorers, Stephen Curry should be in line for a big performance. So far, the Mavericks have allowed their opponent’s top scorer to surpass their season average in 53.52% of their games, giving them a rank of 26th among NBA defenses.

The Mavericks come into this game as the more efficient offensive team, averaging 109.9 points per 100 possessions. When playing as the superior offensive unit, Dallas is winning at a rate of 68%. These victories are coming by an average margin of 13.0 points. On the other side, the Warriors hold the advantage on the defensive end of the floor. So far, they have played 40 games as the better defensive team, picking up 31 wins (78%).

Heading into today’s matchup, the Dallas Mavericks and Golden State Warriors have met up for 4 games. In their last meeting, Dallas picked up a 122-113 win.

How the Public is Betting the Mavericks vs Warriors

Heading into this first game of the Western Conference Finals between Dallas and Golden State, the Warriors enter at 5.5 point home favorites. Thus far, the Dallas Mavericks are 0-2 in game 1’s, as they dropped their opening contests vs Utah and Phoenix. On the other side, the Warriors are 2-0 in the opening games of this year’s playoffs. During the regular season, both team’s finished near the top of the league in their percentage of shots taken from three-point range. However, the Mavericks held a slight edge in their ability to defend from deep, ranking 3rd in three-point field goal percentage allowed. Look for this defense to show up in game 1, giving Dallas a chance to pull off the upset late. I like the Mavs +5.5. Question: Did you know that you could be wagering on basketball games at -105 odds instead of -110? How many thousands of dollars would you have saved over the past few years if you had been betting your basketball picks at a discount? TONS! Be wise! Take 5 minutes to make the switch today to BetAnySports! You’ll be so glad you did!