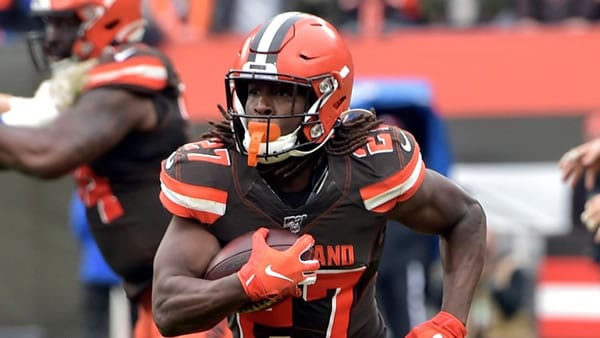 Point Spread: ARI +3/CLE -3 (Bovada - 50% bonus! Rebates on EVERY bet! Fast payouts! Awesome live betting! A MUST HAVE in your sports betting arsenal!)

The Arizona Cardinals take on the Cleveland Browns on Sunday at FirstEnergy Stadium. The Cardinals are the only unbeaten team in the NFL, fresh off their 17-10 win over the 49ers on Sunday. Now atop of the NFC West, the Cardinals look to push it to 6-0 against s Browns team that really took a hard loss on Sunday, coming out on the wrong side of a 47-42 thriller with the Chargers. It’s not easy to bounce back when it looked like they had a win all but locked up. But at home and in need of a big win like this, one could expect a pretty good Browns team to surface this Sunday.

The Cardinals: An Imperfect 5-0

Arizona is hardly the invulnerable powerhouse an unbeaten mark may suggest. Make no mistake. They’re a rising team that has overcome a lot to fight their way to this spot. Kyler Murray looms as a big threat in this game. With the top-ranked Cleveland defense giving up a track meet to the Chargers last week, the high-powered and varied Arizona offense looks like they’re in a spot where they can do real damage.

Still, one has to wonder what the Cleveland run-game has in store for an Arizona defense that has been beaten up on that front this season. With Nick Chubb and Kareem Hunt, it’s an attack that is hard to resist, and it does, in fact, feed into a weakness that the Cardinals have. That’s not to say the Cardinals’ front can’t make up for it in other ways. And maybe their pass-rush can make some dents in the Arizona O-line and disrupt things. But Cleveland’s bread and butter is something that just so happens to be a weakness of the Cardinals.

Can Browns’ Defense Bounce Back this Week?

Ranked high across all areas, one can understand why some thought their “D” would shine last week, but the Browns got lit up by Justin Herbert and Austin Ekeler. Facing Kyler Murray and his weapons could present some similar problems this week. This is a tough stretch for the Cleveland defense, where they might not have their best showings. Against more-sedated offenses, they can really put the clampdown. Teams can’t run between tackles, they can’t get their air-game cranked up, and Cleveland just pounds away with the run-game, with occasional flashes from Mayfield and a talented but battered receiver crew.

The Arizona offense isn’t always the thrilling high-powered unit we saw against the Rams a few weeks ago. Last week, they put up 17 against the Niners, showing that they can be affected by the better defenses they face. So maybe this is a spot where the Browns’ defense can show better form this week. Still, they gave up a big game to the Chiefs this season, gave up 21 to the woeful Texans before being gouged last week by the Bolts. Sure, they held the Bears to 6 points in Justin Fields’ debut while holding the Vikes to 7 points. That’s really one impressive defensive performance out of the whole bunch where they showed they could subdue top-end offenses. Could it be that the Cleveland “D” is a bit overrated?

I don’t see this Arizona offense falling off anytime soon. Murray is a threat to have a big game, bolstered by a growing run-game with Chase Edmonds and sudden TD-machine James Conner. DeAndre Hopkins has been banged up for weeks and could soon start becoming his old dominant self. A gaggle of productive Cardinals ball-catchers can bridge the gap. It’s one of those offenses where there aren’t one or two guys a defense upon which a defense can focus. And with Murray a threat to break one off with his legs, they’re a handful for defenses to face. Last week was a letdown, but Arizona has been pretty steady in scoring between 31 and 38 points in all their other games.

The Breaking Point in this Game

After giving up 131 to Dalvin Cook, 88 to James Robinson, and 89 to Darrell Henderson and Trey Lance, while letting a bunch of other backs to get chunks this season, what can one expect from the Arizona “D” this week? This is a tough road spot in front of a vociferous Cleveland throng. Not that the Cards are in a spot to lay back and enjoy the spoils of a 5-0 record. They’re still a team on the rise in a division where their lead is tenuous. So I don’t think they’ll be caught having a sleepy week. But the Browns are looking to avoid falling to .500 when they were so close to being 4-1 before getting nipped at the wire by the Chargers last week. At any rate, this is a crucial early-season spot for Cleveland, and how well the Arizona “D” resists the run-game will likely decide the fate of this game.

A Cleveland backer needs to stomach what might not seem like top value in this game. Laying three points to an unbeaten team against a 3-2 squad seems counterintuitive on the surface. But it’s a tough road spot out of conference in unfamiliar territory for a lot of these Arizona players. They’re at least a little out of their wheelhouse and are probably operating at an urgency deficit, as well. Combine that with the matchup itself, which presents some interesting angles for the Browns, and the case starts to come together. I see the Browns getting it done at home on Sunday. I’ll take Cleveland.

Loot’s Prediction to Cover the Point Spread: I’m betting on the Cleveland Browns minus 3 points. Bet ALL of your Week 6 NFL football picks for FREE by taking advantage of a 100% REAL CASH bonus on your first deposit of $100 to $1000 at Betnow Sportsbook!