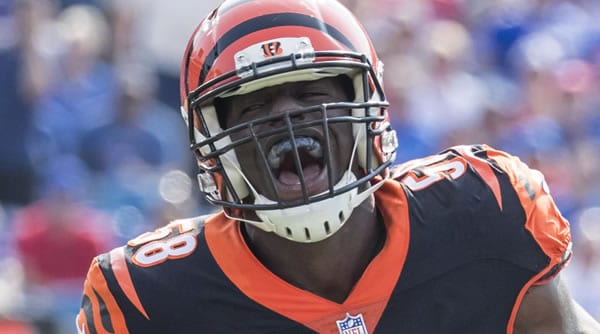 Easy pickings with the AFC North division leader hosting a team that won’t sniff the playoffs, right? Not so fast. The Bengals are a lot better than their record suggests, and except for a blowout loss to Baltimore, Cincinnati has played tough against every opponent on its schedule. Out of six games where the Bengals haven’t come away with a win, five have been by five points or less. That extends to meetings with Pittsburgh as well. The Bengals have lost 10 in a row to the Steelers. That said, six of the past nine matchups have been decided by seven points or less.

As for the Steelers, they were fortunate to survive in Dallas, and now they come home for the first time since Oct. 18. That game was also the only time that they really pounded an opponent at Heinz Field, as they’ve allowed the Broncos, Texans, and Eagles to stay close with them before ultimately pulling out a victory. Pittsburgh is not a team that blows out its opposition; rather, the Steelers win because they play disciplined football, don’t beat themselves, and cash in when they have a quality possession. Will that be enough to cover a large spread against a young and hungry Bengals team that appears very much on the rise?

How the Public is Betting the Cincinnati/Pittsburgh Game

Sharps didn’t wait on this one, and as a result, the line has fallen fast. The Bengals went on the board as 10-point underdogs, but with 54% of tickets on them and more before the line dropped, the number has fallen to 7.5. The total has come down with it, dropping to 46 from 49.

Joe Burrow seems to be the right man for the job in Cincinnati, as he’s getting better every week and has thrown five touchdowns against just one interception in his past two starts. However, he’s now got to show that he can do it away from Paul Brown Stadium. His three worst games of the season have all come away from home, and he failed to throw a touchdown against either Indianapolis or Baltimore.

However, the last game against Tennessee was a significant step forward for Cincinnati. Not only did the Bengals get a convincing win, but they did it without Joe Mixon on the field. The running game wasn’t exactly up to par with Giovani Bernard running the show, but it did enough to get the job done and allow Burrow to throw the ball consistently well and not turn the ball over. It seems Burrow is really developing a connection with Tee Higgins, as the rookie receiver has accumulated 2274 receiving yards and a score in the Bengals’ past three games. Given the Bengals’ defensive liabilities, Burrow and Higgins have to keep that connection going in order to keep pace with the Steelers.

More Picks: Bucs vs. Panthers Prediction Against the Spread >>>

The big question for the Steelers is whether Roethlisberger will be able to play. He’s officially listed as battling a knee issue, but that doesn’t tell the whole story. The reality is that Roethlisberger was in close contact with Vance McDonald, who tested positive for COVID-19 on Monday, meaning the quarterback can’t be at the team facility until Saturday. To hear the Steelers tell it, Roethlisberger would have been limited in practice anyway because of sore knees, but were he not battling COVID concerns, he’d be playing for sure on Sunday.

Regardless of whether it’s Roethlisberger or Mason Rudolph under center, Pittsburgh will likely opt for a steady dose of James Conner to try to exploit a Cincinnati run defense that just is not getting the job done. The Bengals might have bested Tennessee, but it certainly wasn’t because they could stop Derrick Henry, who ended up with 112 yards and a score in a losing effort for the Titans. Beyond Conner, Pittsburgh’s offense will center around pass-catchers Chase Claypool and JuJu Smith-Schuster, but the extent to which they’re involved depends a lot on who is under center. If Roethlisberger plays, both should see plenty of targets. However, Mason Rudolph might play it a little safer if he gets the call.

Playing on the road is no big deal for Cincinnati, as the Bengals don’t have much of a home-field advantage anyway and actually seem pretty comfortable away from home. In their past 16 road games, the Bengals have managed to cover 11 times, and they’re 5-1 ATS in their past six games against AFC opponents. However, the Steelers have tended to dominate the line at home, covering in six of their past eight games at Heinz Field. They’ve also had the better of things against Cincinnati when the Bengals make the trip east, as they’ve covered in five of seven against Cincinnati at Heinz Field.

Points don’t tend to be part of the plan when the Steelers face their division rivals, as seven of their past ten against AFC North opponents have seen the under cash. The Bengals are no exception to this trend: the over hasn’t cashed in this series since 2017, and the teams haven’t combined to top 44 points at Heinz Field since 2013. In fact, 12 of the last 13 meetings in Pittsburgh have finished with 44 points or less.

The weather has all the makings of a nasty day for football, with the wind blowing south-southwest at 10 miles an hour and a steady rain looking likely throughout the contest. The one plus is that the temperature won’t be terrible, as kickoff is expected to be around 62 degrees.

With bad weather and the Steelers’ defense involved, this has all the makings of another game hitting the under between these teams. With that trend hopefully working for me, I’m going to back another reliable trend: Cincinnati keeping the game close. The Bengals aren’t yet ready to defeat the Steelers, but I think they stay right in this game and make Pittsburgh slug out a tight battle. I’m going to take the Bengals and the points, expecting the Steelers to win a low-scoring game by one score. Bet this game and ALL your Week 10 sides and totals at -105 odds instead of the spendier -110 that you’re probably paying at BetAnySports Sportsbook! Making the switch to -105 will save you THOUSANDS of dollars over the long haul!