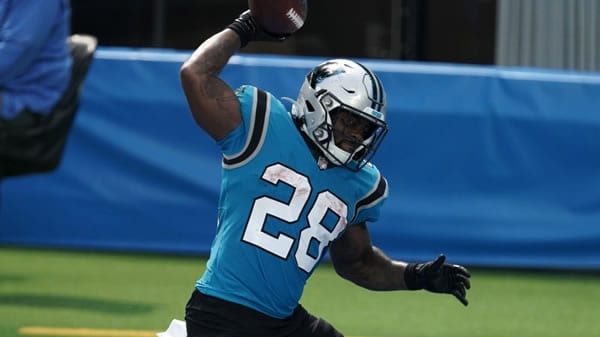 Last week, the consensus G.O.A.T. in Tom Brady suffered the largest loss of his college or professional career as the Tampa Bay Buccaneers were embarrassed on the national stage in a 38-3 blowout loss to the New Orleans Saints. Simply losing to the Saints was not necessarily a huge surprise, granted that many thought the Buccaneers would prevail. However, the awful performance to a division rival and the fact Tampa Bay was held to just 3 points with an all-star cast of talent on the offensive side of the ball; well, that is about as shocking as it gets. On Sunday, Tampa Bay looks to turn things around with a road trip to Charlotte to battle the Carolina Panthers at Bank of America Stadium.

At first glance, this Sunday’s NFC South showdown between the Buccaneers and Panthers appears to be the perfect spot for the Buccaneers to rebound. The Panthers have dropped four straight games and have surpassed the Falcons for last place in the division. However, the Panthers have been extremely competitive despite the four straight losses. In fact, Carolina took Kansas City down to the wire in last week’s 33-31 loss. In my opinion, Head Coach Matt Rhule has done a phenomenal job in his debut season despite numerous injuries and an inferior group of talent. As a result, it would not be surprising to see the Panthers contend for the victory in this game, especially if Tampa Bay matches their performance from last Sunday.

Last week, All-Pro running back Christian McCaffrey returned to the field for the first time since week 2. The Panthers standout was sidelined for several weeks with an ankle injury. McCaffrey’s presence provides an immediate boost to Carolina’s offense, which could be seen in their ability to rack up 31 points against the defending Super Bowl Champions. Unfortunately, McCaffrey suffered a shoulder injury and is reportedly getting 2nd opinion evaluations on the severity. As a result, McCaffrey is expected to be out again on Sunday, and the team is uncertain around the projected length of his absence.

Though the Panthers will miss running back Christian McCaffrey’s presence, Head Coach Matt Rhule has done a really good job of sustaining a sound offense in his absence. Backup running back Mike Davis has been solid, and the team has also used WR Curtis Samuel in creative ways, including backfield touches. Furthermore, QB Teddy Bridgewater has played well despite a slightly concerning interception total (6). Still, Bridgewater is completing 72% passing and has been able to stretch the field to receivers, Robby Anderson and DJ Moore. Simply put, this Panthers offense has been efficient and effective.

Tampa Bay has one of the better defenses in the league, but if there is a weakness, it comes in the secondary. We saw the Saints shine a light on the pass defense concerns last week, and stylistically this match-up could favor the Panthers finesse passing scheme. Ultimately, the focus will still be on the other side of the ball where Brady and company attempt to rebound. When you consider the receiving cast of Mike Evans, Chris Godwin, and Antonio Brown, there should be no excuses in passing targets. Brady was awful against the Saints with three interceptions, but we should not expect that trend to continue. Historically, Brady has bounced back after poor performances. Still, I’m not convinced a better performance will be enough. The Buccaneers offense lacks a narrative, and I also believe Bruce Arians was completely out-coached last week. I would not be surprised to see a similar result this week.

Jay’s Pick to Cover the Point Spread:I’m sure Tampa Bay will be motivated after the embarrassing loss last week, but I think the match-up favors Carolina. I believe the Panthers are right for the upset, so I will take the points. Take Carolina +5.5. Bet your Week 10 NFL picks FREE by taking advantage of a 100% REAL CASH bonus on your first deposit of $100 to $300 at MyBookie Sportsbook!