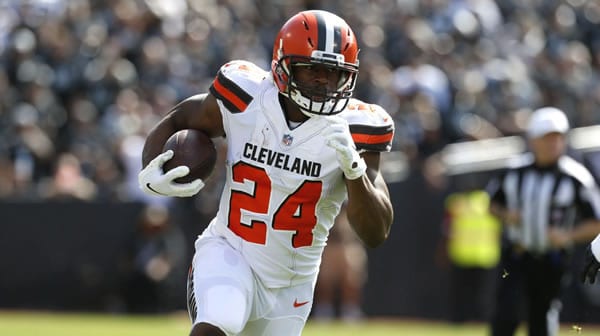 The Cleveland Browns come to Heinz Field to take on the Pittsburgh Steelers in an AFC Wild Card game on Sunday. These divisional teams have played twice already, including just last week, when the Browns punched their postseason ticket with a 24-22 win over Pittsburgh. The Steelers, not needing the game, sat Ben Roethlisberger, and the Browns were able to eke out the win. Who can get it done in the third act of this matchup this season on Sunday?

These divisional teams are meeting for the third time this season, and with the last one coming just last week, it would appear to be a relevant talking-point. Then again, with the Steelers sitting out Big Ben, it might send us off-course to take the Browns’ win last week too importantly. The last time the Steelers played the Browns in this building with their starting QB, they slaughtered the Browns, 38-7. The Pittsburgh defense scored two TDs, they ran the ball well, and the Browns really suffered for most of the game. I suppose the Browns got the last laugh, winning a game that really mattered last week. But for it to come down to stopping a late two-point conversion against a team playing at a far-reduced level of urgency might be a case where a win can actually be held against a team.

Which Team is Worse Off?

A lot of talk has centered on how the Steelers have fallen off since a lightning-fast start, but I’m not sure the Browns are in an appreciably-better position. Their recent work has been uneven, to say the least. Even last week, with the playoffs on the line and the Steelers playing their backup QB with other guys out, it was a massive grind for the Browns. When you don’t make the playoffs for as long as they did, you don’t argue too much when a team finally gets in. But the sag in the late-season was palpable, highlighted by a bad loss to the Jets in week 16. Suffice to say, the lack of overall umph in weeks 16 and 17 with all they had on the line has not been inspiring.

But let’s face it, the Steelers ended the season in anything but fine form. It was nice for them to “right the ship” mid-game against the Colts a few weeks ago and come from way off the pace to win. Last week’s loss didn’t come as a heartbreak, being that Pittsburgh wasn’t in an urgent mindset to win that game. It’s just hard to project what we’re going to see. For much of the season, we saw a team that looked like a top contender, and it’s just been a while since we’ve seen that. But there were good signs against the Colts, and maybe a rested Ben Roethlisberger can resume the form that got people so excited in the first place. A potential Cleveland backer in this spot could derive some comfort from the fact that, for the most part, the Steelers have been a far cry from the team that battered them 38-7 the last time they were in this stadium.

Will the Steelers’ Defense Dominate?

Baker Mayfield and the Cleveland offense have a lot of tools. Their run-game can be a monster with Nick Chubb and Kareem Hunt, with a slew of capable ball-catchers. But with 31 points scored in two games this season against the Steelers, they have struggled. Even with everything on the line last week, they really had to grind for every point, with long stretches of nothingness from the offense. With more support from the other side of the ball this week, the Pittsburgh defense should again be flexing its muscles. And this is a game where taking care of the ball will be a paramount concern for Mayfield. He did it last week, but his miscues the first time they played were key to the Steelers dominating that game.

Last week, the Cleveland defense was able to hold Pittsburgh to 22 points and register the late stop to secure the big win. That was with Mason Rudolph. A rested Big Ben in a big game at home is truly a different kettle of fish. Their good points is that they can be really disruptive. The Cleveland “D” is one of the more-adept units in getting turnovers and some of that resonated last week. Their front is very tough, a unit that is usually solid against the level of run that the Steelers bring while also getting to the quarterback with regularity, though losing Olivier Vernon hurts. But while it hasn’t come up in two games so far against Pittsburgh, the Cleveland secondary is a bit leaky, despite its playmaking ability. In addition, some of their late-game play lately has been leaving a lot to be desired. And in games like this, where the results of games and spreads are coming down to the end, it’s a definite drawback. The late two-point stop last week was clutch, but they might not be so lucky with a more-urgent Steelers team that has Roethlisberger. And for the most part, it’s a unit that has recently tended to melt late in games.

The Steelers have become imminently less-bankable in light of the way they sagged to the finish after a big 11-0 start. And while those liabilities could surface against the Browns, I think they match up pretty well against Cleveland overall. The variety of their aerial game should resonate with Big Ben at the controls, while I’m not sure the same applies to the other sideline. The Pittsburgh “D” and just enough detonations on the other side of the ball will get the Steelers over the hump for the big win and cover on Sunday.

Loot’s Prediction to Cover the Point Spread: I’m betting on the Pittsburgh Steelers minus 4 points. Bet your Clev/Pitt pick and ALL you sports bets at reduced odds -105 instead of the spendy -110 that you’re bookie is serving you! Making the switch to reduced vig will save you HUNDREDS of dollars per year and is much better than any bonus you can get as it’s the gift that keeps on giving! Find this beautiful offer at BetAnySports Sportsbook! Home of the 19 point NFL teaser!