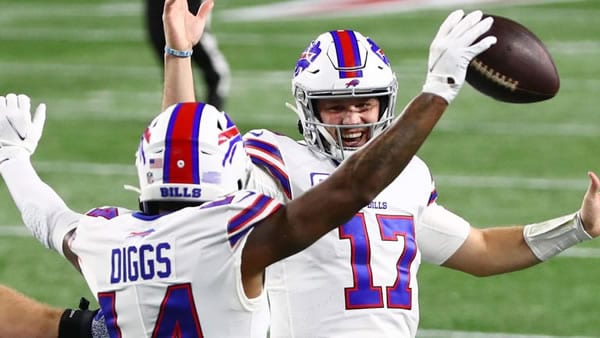 Of all the surprises in week 9 of the NFL, Buffalo’s 9-6 loss to the Jacksonville Jaguars may have been the most shocking outcome in recent memory. The Bills, who owned the NFL’s best scoring offense and defense, were two-touchdown favorites against the previous 1-6 SU Jaguars in what appeared to be the most certain outcome of the week. Instead, the Bills’ offense and QB Josh Allen could not get anything going in an embarrassing performance. Allen was sacked four times and tossed two critical turnovers as the Bills were held out of the endzone for the first time all year.

With the loss in the rearview, Buffalo will get the perfect bounce-back opportunity on Sunday when they travel to MetLife Stadium for a date with the New York Jets. The Jets’ defense has been absolutely horrific in recent weeks, giving up point totals of 54, 31, and 45. Most recently, the Jets suffered a 45-30 loss last Thursday against the Indianapolis Colts. Colts’ running backs Jonathan Taylor and Nyheim Hines ran wild to combine for 25 carries for 246 yards with three touchdowns. On the season, the Jets rank dead last in the NFL, allowing over 400 yards per game. Needless to say, Buffalo should have every chance to right the ship in what appears to be an extremely favorable match-up.

Jets starting quarterback Zach Wilson has been sidelined for two games with a PCL sprain. The rookie quarterback has produced subpar results this season, completing 57% passing for 1,168 yards with four touchdowns and nine picks. In Wilson’s absence in week 8, backup QB Mike White provided a tremendous spark to the offense by hitting 37 of 45 passing for 405 yards with three touchdowns and two picks in the Jets upset victory over the Bengals (34-31).

White got the start again last Thursday against Indianapolis and looked good early before being knocked out of the contest with a forearm injury. Interestingly, both Wilson and White have returned to practice this week, with all early indicators pointing towards both quarterbacks being available. Head Coach Robert Saleh echoed sentiments on Monday and Tuesday that the Jets would stay with White, who looked really good in his first two starts. While nothing has officially been announced, it is believed that White will make a deserving 3rd straight start against the Bills on Sunday.

In last week’s loss to Jacksonville, QB Josh Allen was under relentless pressure throughout the game, which was the major contributing factor to the Bills’ offensive woes. When protected, Allen is a highly efficient passer that can also make plays with his feet when plays break down. Buffalo has suffered several injuries along the offensive line, and if the Jets sell out to bring pressure, they could complicate things for Allen again. Unfortunately, I have not seen the same aggressiveness or relentless blitzes from Gregg Williams to expect that to happen.

I would be extremely surprised to see Buffalo’s offense stymied again for the 2nd week in a row, and despite being a pass-oriented offense, the Bills will likely be able to move the ball at will. On the other side of the field, Mike White could provide bettors with an excellent opportunity to take aim at the total 47.5. Not only has White looked good, but the Jets run a lot of underneath routes with WR Jamison Crowder, Keelan Cole, and Elijah Moore. We have seen the short-passing attack give the Bills defense many challenges this year, most recently against Tennessee. Despite being the NFL’s top-scoring defense, I think this is a match-up where the Jets can create scoring opportunities by staying under the zone coverage. The Jets have not produced an outcome with less than 65 combined points in their last three contests, and I think the total here is in serious jeopardy for another “over” to cash.