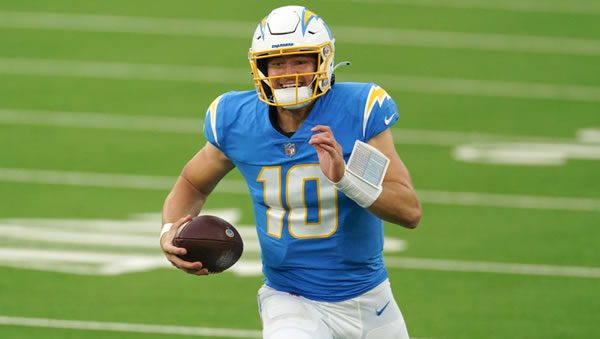 Point Spread: LAC -2/LV +2 (Bovada – If you live bet games, you gotta check them out! With every sport all on the same page and fast processing of bets, they’re head and shoulders above the rest! Bar none!)

The Los Angeles Chargers come to Allegiant Stadium on Sunday for an AFC West faceoff with the Las Vegas Raiders. On Sunday, a 40-34 overtime for the Raiders over Seattle was a nice development for a team that hasn’t had a ton of them this season. They now return home to face a familiar foe in the 6-5 Chargers. On Sunday, a narrow 25-24 win over the Cardinals kept them in the mix, as they look to build on that this week in what seems like a winnable spot. Who can bring us home the cover in this divisional melee in Las Vegas?

The Two Sides of the Raiders

With two straight wins, we now find ourselves undergoing yet another perception change on the Raiders. There have been times this season where their offense is one of the best in the league. Joshua Jacobs is putting up ridiculous numbers like he did last week and Derek Carr is able to connect regularly with Davante Adams and his other targets. Then we’ve also seen multiple occasions where the Raiders’ defense blows it, allowing teams to come back from unconscionable leads. Last week may have been the first time we saw some really clutch late-game play from this bunch, as a late TD and then a huge OT run by Jacobs saved the day.

When getting behind the Raiders, you’re getting some good things. First of all, as a 4-7 team, the value is going to be there more often than not. There’s a chance that one of the league’s most potentially-fruitful offenses will do their thing. In this spot, you see some issues the Chargers are having on defense and it’s hard to not get excited at the prospects of Jacobs running wild on this bunch, while Carr makes enough connections to really make it stick. In addition, they’re taking on a Chargers’ team that has been far from bankable this season, often times playing down to the level of opponents they’re favored to beat. But when getting behind the Raiders, there’s a flip side to that coin. At any moment, it can all dry up. They won’t be doing anything right. Their defense will melt, the offense grinds to a halt, and it starts getting really ugly.

Clues from Their First Game?

An imminently-forgettable 24-19 Bolts’ win at SoFi was the regular season opener for both teams. It’s a bit iffy how much it really matters considering what has happened with both teams since that day. There wasn’t much to take away from the game, other than the final score looked a little closer than it was , as the Chargers did a lot of early damage, before the Raiders tried to creep back into it. It was a very efficient day from Justin Herbert, who completed 26 of 34 passes with three TD strikes. And from what we’ve been seeing from the Raiders’ secondary all season, it’s unlikely that they will be able to significantly curtail the Chargers’ aerial attack on Sunday, which could be as healthy as it has been in weeks.

Matchup Issues for the Chargers this Week

Granted, a lot of this is contingent on the Raiders’ offense delivering, something that hasn’t been a guarantee. But the Raiders are a rhythm offense and once they show hints of getting on a roll, it should be taken seriously. They’ve gotten on some rolls this season and have shown it’s not always a one-off kind of thing. Granted, Jacobs went off for so many yards last week that you hesitate in thinking he can explode again, but we’ve seen lesser backs really take it to this Chargers’ defense this season. And despite all their talent and big-play ability in the secondary, they haven’t been a really stout unit this season and you can’t rule out a big Adams day in this spot, either. So needless to say, there are realistic routes to success for the Raiders’ offense this week. The Bolts get a lot of production out of Austin Ekeler, make no mistake. But as far as being a good running team, the Chargers can’t really lay claim to that. Other than aerial offense, there’s not a ton you can depend on from week to week.

Last week notwithstanding, we’ve seen these teams do a role-reversal this season. The Raiders last year would always take the bull by the horns late in games and get the most of what they have, seemingly always clutch when they needed to be. This season, it’s the Chargers who we’ve seen display that late-game flair, as evidenced in how they went for the two and the win late last week against Arizona. Gone are the Bolts who take a lead and wait for the roof to cave in. And against a Chargers team more-prone to pushing the envelope late, that will likely again test the Raiders’ capacity for late-game clutch. The Raiders will be facing a team with a real agenda this week. It’s getting later in the season and falling to 6-6 just makes everything from here on out so much more of an uphill grind. The Chargers really need this one.

The Raiders are one of more erratic teams in the NFL, as they’ve covered the entire spectrum of form through 11 games this season. And the state of the Chargers’ defense puts the possibility of an offensive explosion in play. I wonder if Jacobs maybe being a little banged up after galloping around like a mad man last week won’t rob the Raiders of their best hope to take it to a struggling Chargers’ run-defense. Combine that with the murky prospects of this Raiders’ secondary being able to curtail a more full-power Chargers’ aerial offense and I think the Chargers are a solid pick this weekend. I’ll take the Bolts this week.

Loot’s Prediction to Cover the Point Spread: I’m betting on the Los Angeles Chargers minus 2 points. Bet your NFL football picks for FREE this week by scoring a 100% real cash bonus up to $500 when you enter bonus promo code PREDICTEM on the Special Offers page at the web’s oldest and most trusted sportsbook: Everygame!