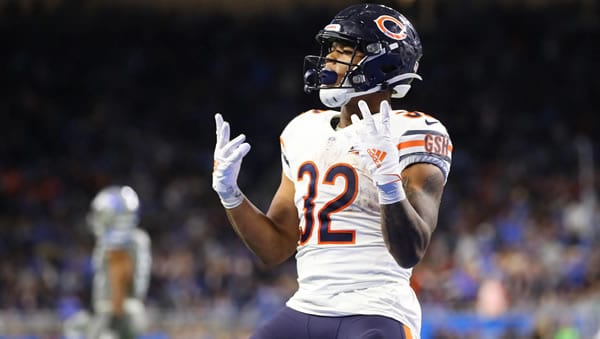 The Chicago Bears delivered one of their most complete performances of the season in a 33-14 victory over the New England Patriots on Monday. The Bears got help on both sides of the ball with a strong defensive effort, resulting in 3 turnovers against backup QB Bailey Zappe. Meanwhile, Chicago’s offense finally found some momentum as well, led by QB Justin Fields who hit 13 of 21 passing for 179 yards with a touchdown and interception while also leading the team in rushing with 82 yards and another touchdown on the ground. The victory was the Bears’ first of the season on the road, but they will get a more difficult road test this Sunday when they travel into Arlington for a date with the Dallas Cowboys as 9.5-point underdogs at AT&T Stadium.

The Cowboys will enter this Sunday’s week 8 contest against Chicago fresh on the heels of a 24-6 victory over the Detroit Lions, which marked the return of QB Dak Prescott for the first time since week 1 when he suffered a thumb injury to his throwing hand. In the return, Prescott looked solid, hitting 19 of 25 passing for 207 yards with a touchdown. However, I would point out that the Cowboys were pretty conservative with the play-calling against Detroit and stuck to the heavy rushing attack that has helped produce the 5-2 SU (5-2 ATS) record. Against Detroit, It was actually the Cowboys defense that really took over by forcing five turnovers and consistently put the offense in good field position. The same Dallas defense may be the key to determining Sunday’s outcome against Chicago.

Cowboys RB Ezekiel Elliott expected to be out against Chicago

Despite the fact many have lobbied that RB Tony Pollard has been the most effective runner for the Cowboys over the last two seasons, star running back Ezekiel Elliott continues to be the workhorse for the Cowboys heavily reliant rushing attack. Just last week, Elliott suffered a knee injury early in the game against the Lions but was able to come back to cash in on two short-yardage touchdown runs to post another solid stat line. However, the same injury that took Elliott off the field temporarily against the Lions is expected to sideline the star running back for this week’s contest against the Bears. The explanation is that Elliott suffered a low-grade knee sprain, and with the Cowboys’ on the verge of a week nine bye, the team is electing for their star running back to get some needed rest. Considering Elliott was banged up for much of the 2021 season, which led to some questionable performances, the plan for Elliott to sit seems rational. As a result, emerging star RB Tony Pollard is expected to get the lion’s share of touches against the Bears.

From a match-up standpoint, I think the biggest advantage in this game is the Cowboys’ defense which does a great job of creating pressure and creating turnovers. In fact, Dan Quinn’s leads the NFL in sacks (29) by a wide margin and also ranks 2nd in overall scoring allowing just 14.9 points per game. Against the Chicago Bears and the shaky play of QB Justin Fields who has struggled significantly against pressure, I think this is an ugly combination for a Bears offense that is seemingly one-dimensional on the ground. Granted, running backs David Montgomery and Khalil Herbert and the running ability of Fields gives the Bears opportunities to move the ball in this match-up. However, I just don’t think it will be enough, especially if Chicago struggles on early downs.

For the Cowboys, I was not necessarily impressed with QB Dak Prescott’s return last week. Still, I do give credit to Offensive Coordinator Kellen Moore for sticking with a run-heavy approach that gives Dallas the best option to win when you combine the play of the defense into the equation. Without Elliott this week, Dallas will not have the 1-2 dynamic, but Pollard is still an exceptional back with tons of potential. The Bears are giving up nearly 150 yards per game on the ground as the 3rd worst rushing defense in the league. I think that is an important stat because QB Dak Prescott typically plays his best football when the running game is operating efficiently, and I think that will be the case for this particular match-up.

I believe this match-up favors Dallas in nearly every way. As long as Dallas protects the football, I believe they will cover and keep their momentum going. However, I would not be surprised if both teams have a slow start and jeopardize a game pace that favors the “under” in regards to the betting total.
Jay’s Pick: Take Dallas -9.5