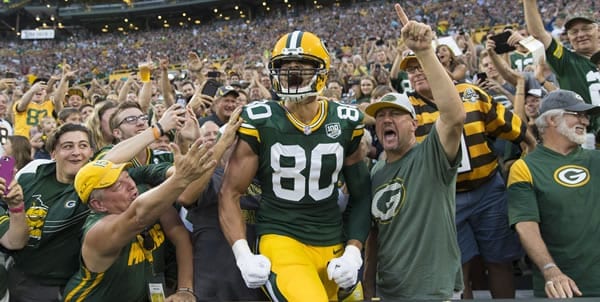 The march toward the NFL playoffs is in full swing, and every game at this point has big implications. The Green Bay Packers are in control of their own destiny in the NFC North, and the Giants are mostly looking ahead to next season, but this one could be closer than it looks on paper. The Packers are fresh off their worst effort of the season last week against the 49ers, and despite a seven-game losing streak, the Giants have been within seven at the end of four of those losses. Green Bay has won each of the last two meetings between the teams, dropping the G-Men by a 38-13 in 2017.

It was going to take a big-time effort for New York to pull an upset under normal circumstances, but a spate of key injuries is making that even tougher. TE Evan Engram (44/467/3) leads the team in receptions and yards despite having played just eight games, and he is again questionable ahead of Sunday with a bad foot. Golden Tate is second on the team with four receiving scores, but he is in the concussion protocol and questionable as well. S Jabrill Peppers is a second-leading tackler and will miss the game with a transverse fracture in his back. Missing players on offense spells trouble for a team sitting at 25th in total yards and 24th in points at 19.7 per game.

More Picks:Get all of our team’s Minnesota at Seattle Free MNF Pick

There was nothing good to report from the 37-8 drubbing at the hands of the Niners, and it looked like the Packers might lose T Bryan Bulaga after he left with an injury, but Bulaga was on the practice field by mid-week and should suit up Sunday. Green Bay still sits atop the division by virtue of their tiebreaker win against Minnesota, so last week won’t be too damaging if they can handle their business from here on out. Aaron Rodgers seldom plays two poor games in-a-row, but he shouldn’t have to do it all with Aaron Jones and Jamaal Williams ready to run against a bottom-10 New York rush defense. That RB duo has accounted for twelve rushing touchdowns but also has 550 receiving yards and eight touchdown grabs to be one of the more complete backfields in the NFL. Davante Adams leads teams with 46 receptions and 530 yards and finally got into the endzone for the first time last week. The Green Bay defense has slipped to 28th in total yards allowed, but Preston Smith (10.5 sacks) and Za’Darius Smith (10 sacks) have routinely been able to get pressure and should do so against a Giants O-Line that has allowed 35 sacks so far.

The Future is Now

The Giants are going to be the beneficiary of a high-draft pick in 2020, but the extended Daniel Jones audition this season has given the G-Men the confidence that they have the right guy under center. Jones has thrown for 2,134 yards and 17 touchdowns against eight interceptions while also getting it done with his legs with 235 yards and two scores on the ground. Saquon Barkley hasn’t regained his pre-injury form since returning five weeks ago, but he remains one of the few legitimate 3-down backs in the league and will get plenty of work against Green Bay’s 26th-ranked run defense. If Engram and Tate do miss the contest, New York still has a few options with Darius Slayton leading the team with five touchdown receptions and Sterling Shepard returned to action last week after a five-week absence.

Green Bay has been a good rebound team, winning five straight against the spread following an ATS loss. New York has been brutal at home for an extended period of time, going 5-15-1 ATS in the last 21 games at MetLife Stadium and are 0-4 against the spread against an opponent with a winning record since Daniel Jones took over. The Over is 16-5 in the last 21 when Green Bay plays a sub-.500 opponent and the Over is 4-1 in the last five when New York is playing a team above the .500 mark. The line opened essentially where it is now and has not moved despite Green Bay getting 75% of the public action. Maybe the sportsbooks are in a little bit of post-turkey-day food coma as that many bets on one side typically triggers a significant line move. Bets on the total have been a little closer to even with a 60-40 split in favor of the Over.

I think things went so poorly for Green Bay last week that a bounce-back is in order. The Packers are far from a perfect team, but they don’t tend to struggle with lesser teams, and the Giants are not elite on either side of the ball. The Green Bay running game has been good enough to win the time-of-possession battle in most weeks, and the Davante Adams v. Janoris Jenkins matchup is an advantage the Packers can exploit. Kevin King and Jaire Alexander have combined for 24 pass defenses to lead a strong Green Bay secondary that should be able to hang with the banged-up Giants receivers. Without Barkley in top-form, it is the Jones/Williams duo that makes up the better backfield from a performance perspective, and that is too many check-marks more me to think that the Packers are going to struggle to cover the six. Look for Green Bay to pull away in the second half and get a 29-18 win.