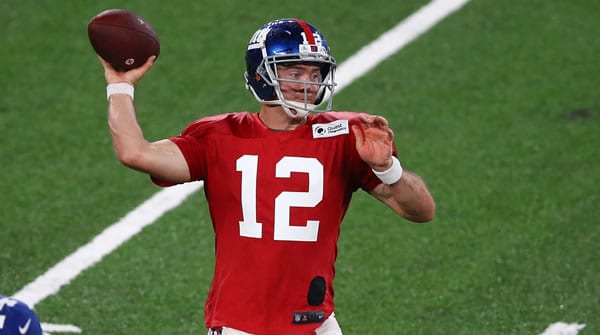 The New York Giants come to the northwest for a Week 13 matchup with the Seattle Seahawks on Sunday. The Giants have seen their season take a positive turn in recent weeks, with their 19-17 win over Cincinnati on Sunday being their third win in a row. In a sideways NFC East, that surge is enough to get in first place. They could really add some validity to their case with a win over a winning conference team, the 8-3 Seahawks. On MNF, the Seahawks went into Philly and pulled out a 23-17 win for their second straight victory. Can they turn around on the short week, or will the Giants provide a surprise?

Can the Giants Continue Their Momentum?

The timing of losing QB Daniel Jones for the time being with a bad hammy isn’t great. And as of press time, his exclusion from this game isn’t yet guaranteed, though one could assume he won’t be in there. They could be in OK shape with Colt McCoy, a longtime backup who still makes NFL rosters at 34 for a reason. He’s not a stranger to starting games, first when he got drafted by Cleveland and during his tenure in Washington. McCoy started a game last season and two the year before and isn’t in unchartered water. He can sling it and has good legs.

When you take the Giants’ three wins in a row and the fact that they lost their last two games by a single point each, it’s clear that they’ve seen things start going more their way. But without Jones and Barkley, they will have to make it work another way. McCoy won’t have to replicate a high-flying passing offense, something Jones hasn’t been able to do. Whether they can maintain their run-game, which has been effective in spots, remains to be seen, as they lose Jones’ running production. But who knows? Maybe McCoy can make better use of good receivers Darius Slayton, Sterling Shepard, and Golden Tate, along with TE Evan Engram. Other offenses have found great success through the air against Seattle this season, and maybe the Giants can follow suit.

In allowing an average of 23 points a game, despite a sometimes-dysfunctional offense supporting them, the Giants’ defense has been a big part of their recent upsurge. In six games, no team has scored more than 25 points against this defense. We’ve seen this “D” succeed against teams like Pittsburgh, the Rams, and the Bucs. So maybe they can do the same here, albeit in a tough road spot on Sunday. With Laken Tomlinson, Leonard Williams, Dexter Lawrence, and others up front, they’ve been excellent against the opposing run-game. Losing Kyler Fackrell leaves their middle exploitable, and we’ll see how that goes against a Seattle team that could exploit that. Still, with greater stoutness and more playmaking in the back, they’ve been better against the pass, as well. All in all, it’s a team where some things have come together. They fought through a lot to get here and should be recognized for their mental strength. Most people haven’t noticed, and blowing off a team like this could be costly.

Catching Seattle at the Right Time?

Maybe the Giants being the Seahawks second-straight NFC East opponent and not a foe that demands a lot of respect will also help open the door for a possible cover. We’ve come to a point in the season where the Seahawks see diminished returns from their team. They are 3-3 in their last 6, following a 5-0 start. The offense isn’t as electric. The aerial precision of Russell Wilson has waned. And only now are they starting to get the pieces back to reignite their running-game, something that might require more time.

Some things are starting to manifest in the wrong way on the Seattle offense. A line that was holding up well looks to be in a state of deterioration, leaving Wilson less-protected and throwing off the whole rhythm of the operation. Against a peaking Giants’ defensive front, that could manifest in a really bad way. Against Philly, we saw a lot of this, and the price would have been steeper if not for the utterly-dysfunctional state of the Eagles’ offense.

Can Seattle’s Defense Pick up the Slack?

It’s not all doom and gloom on the Seattle sideline. Seeing a defense that was performing at record-bad levels, it was hard to imagine a team going that far with a defense that aerially couldn’t stop anything and only made up for it with an offense that was just better than their opponents. In the last three weeks, we’ve seen some different results, with the Seahawks allowing 61 combined points in their last three games. With two of those games coming against the Cardinals and Rams, we see a big improvement.

Against a backup quarterback on an offense whose best player is on IR, maybe we see the Seattle defense continue to play well, or at least better. Any issues with the Seattle pass-defense might not be brought to light by the 28th-ranked passing offense in the league that is now without their starting QB. And McCoy won’t be facing the same half-dead Seattle defensive front-seven that we saw for the first two months of the season. With Carlos Dunlap, surging LJ Collier, the still-impactful LB duo of Bobby Wagner and KJ Wright, and the run-stop of Poona Ford and Jarran Reed, this defense is becoming much more-disruptive.

While the Giants could very well be better and end up winning their division, narrow wins over NFC East teams and the Bengals don’t necessarily signal a revival, at least not to the extent where beating Seattle is now in the cards. Not that Jones has been lighting the world on fire, but putting in a 34-year old backup at this point in the season is far from ideal, and this is a tough game for him to hit the ground running. Some recent Seattle showings, even the one last week where they struggled to put away a Philly team that was playing awfully, do give one pause. But I see the Seattle defense continuing to play better, as Seattle pulls away for the win and cover at CenturyLink.

Loot’s Prediction to Cover the Point Spread: I’m betting on the Seattle Seahawks minus 10 points. Bet your Week 13 NFL picks and ALL your bets every week at reduced odds -105 (instead of the -110 that you’re getting socked) at one of the web’s best bookmakers —> BetAnySports!