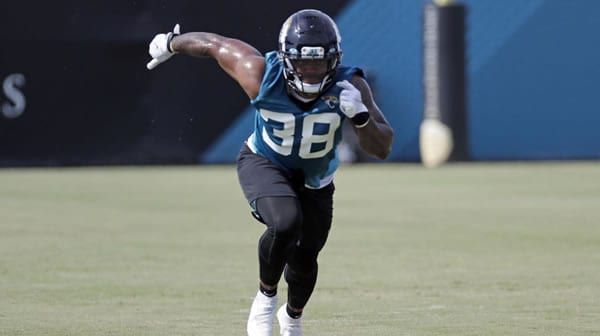 The Indianapolis Colts begin the Philip Rivers era when they visit Jacksonville for a Week 1 AFC South battle Sunday afternoon. Who do we like here for our free NFL pick?

Week 1’s NFL betting odds opened Indy as a seven-point road favorite over the Jags, with an over/under of right around 46.5. Early betting action then bumped the Colts to -7.5 and dropped the total to 45.

Colts vs. Jaguars Set Up

Indianapolis played 7-9 SU, 7-7-2 ATS last season, its first full campaign without Andrew Luck at quarterback and its second season under Coach Reich. The Colts got off to 5-2 early start and 6-4 heading into the home stretch but lost four games in a row to fall out of playoff contention.

In all, Indianapolis lost six games last year by one score or less.

That late-season swoon also caused Indy to play under its wins over/under of a 9.5.

Over the off-season, the Colts made a couple of big moves, bringing in QB Philip Rivers and DT DeForest Buckner, then drafted WR Michael Pittman, Jr. out of USC and RB Jonathan Taylor out of Wisconsin.

Indianapolis will go off this season playing against a wins over/under of 9.5.

Three seasons ago, Jacksonville nearly won the AFC championship, and the future looked very bright.
Three seasons later, the Jags might be the worst team in the League. Jacksonville played a disappointing 6-10 SU, 7-9 last year, and had to win two of its previous three games to get that far. The Jaguars started 0-2, got to 4-4, then lost five in a row, several in a non-competitive fashion. And seven of their ten losses came by double-digits.

Jacksonville also played under its wins O/U of 7.5.

Over the off-season, the Jags parted ways with QB Nick Foles, RB Leonard Fournette, and CB Jalen Ramsey added several veterans on defense, and used their top two picks in the draft, at Nos. 9 and 20 overall, to take cornerback CJ Henderson and DE K’Layon Chaisson.

Jacksonville will go off this season facing a wins over/under of five, the lowest total in the League.

Get all of our team's weekly analysis plus picks against the spread!

The Colts only ranked 25th in total offense last season at 327 yards per game but seventh in rushing at 133 YPG. On the other side of the ball, Indy ranked 16th in total defense, allowing 347 YPG, and seventh against the run, holding foes to just 98 YPG on the ground. So they out-rushed opponents by 35 YPG, which is usually a figure worthy nine or ten wins. Finally, the Colts ranked 12th in turnover margin at +2 and 15th in time-of-possession at 30:11.

We’d also note the Chargers finished tied for last in the NFL in turnover margin last year at -17 in no small part because Rivers threw 20 interceptions.

Most signs point toward Indianapolis to win this game, and they probably will. But 7.5 points can be a lot for a divisional road favorite to cover. Rivers might not be the answer the Colts are looking for, and we like Jacksonville QB, Gardner Minshew. Plus, the Jags should be improved on defense, and if that unit can hold Indy to 21-24 points, they should cover. Jacksonville might not win this game outright, but we’ll take the home dog and the points here. Be sure to also check out my Week 2 College Football Picks!