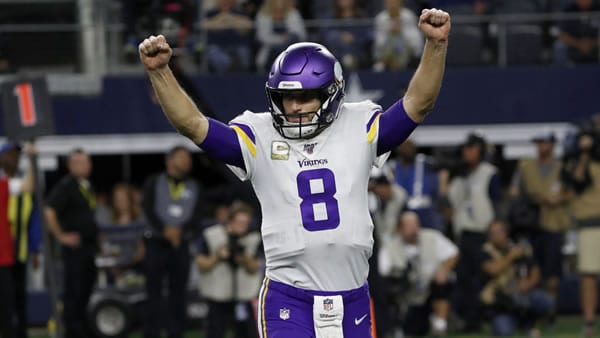 The Tennessee Titans come to U.S. Bank Stadium on Sunday for a week two showdown with the Minnesota Vikings. The first two weeks haven’t been kind to the Vikings. A team many fancied to make a postseason run this season has not only dropped two games, but they weren’t competitive in either one. On Sunday, it got really ugly in a 28-11 loss on the road to the Colts. Tennessee, conversely, hasn’t been that kind to bettors in failing to cover the spread in weeks one and two, but two hard-fought victories have them at 2-0 and feeling pretty good about themselves. Who can notch their first cover of the season on Sunday?

Looking at Tennessee a Different Way

In a bottom-line business like football, it’s still a bit perplexing how people continue to disregard the Titans. Going back to last season when they made their big run to the playoffs, getting all the way to the conference title game, they’ve been in winning form, with only the champion Chiefs able to knock them off-course. It’s easy to see why they’re a hard sell. They have a recycled quarterback who had one good season, just one really good weapon in Henry, and a defense that makes a lot of plays, while also being readily exploitable, as well, in certain spots.

But let’s take a closer look at what they do well. After a gutty comeback in week one and near-perfect day on Sunday, despite a second half that was lethargic at times, it’s fair to say that Tannehill is a pretty darned-good quarterback. Henry has 200 yards through two games and it doesn’t even seem like he’s in high-gear yet. Corey Davis, AJ Brown, Jonnu Smith, and Adam Humphries aren’t going to get a lot of headlines, but can be really effective as a group with their different skills and sizes. I just think that what they collectively combine to create surpasses what you see on paper.

Get all of our handicappers game previews: NFL Picks ATS!

A Spot Where the Vikes Can Shine?

If they were ever to get it right, it has to be here—at home with their backs against the wall against a team that has never played in this building. An 0-3 start has been overcome before, but it would really qualify as a disaster for a hopeful Vikings’ bunch. Losing in a shootout to the Packers in week one was one thing. It wasn’t that competitive, despite the score being vaguely close and they did score 34 points. But to come up with nothing until late on Sunday when the game was already over was downright pitiful. But just as an NFC North team struggled in an AFC South stadium on Sunday, the Vikes are hoping to be the beneficiaries of that mojo this week.

Some things are too alarming to ignore, however. Kirk Cousins was 11-for-26 on Sunday with no TDs and three picks. They are really stripped dry of tools, especially with Stefon Diggs gone. They’re down to Dalvin Cook at running back, not much help when playing from behind, along with Adam Thielen and rookie Justin Jefferson at wide receiver. They get nothing out of the tight end position these days in terms of production and it’s just not a very stocked toolbox with which Cousins has to work. Some of the seasons Minnesota has had since Cousins came into the mix and his stats tell one story. But sometimes when watching him run this offense, it’s not that clear that he’s the right guy. Even so, the Tennessee defense is more playmaking than it is stout and this is a must-win for Cousins and Company, so maybe they’ll play accordingly. But Sunday was a game they needed too, right? And what happened?

Still, at home in week one, the offense was able to fire up 34 points against Green Bay, another conference title game participant from last season. Tennessee is more out of their wheelhouse in Minneapolis, with a defense that really relies more on how well the offense is doing. If Minnesota can keep a handle on Henry, not get picked apart through the air by Tannehill, and see their offense pick up where they left off in week one, one can see how the Vikings could get in the win-column this week.

With the Titans, you have a team that gets the most of what they have. No one picked them to go as far as they did last season and a 2-0 start to the season in two games where they really had to dig deep further speaks to that inner-resource they have. In a lot of ways, their success makes no sense. But they extract so much out of what they have. With the Vikings, you have a team that had all offseason to figure it out and they come out and lay two fat eggs to start the season. And sure, some key injuries on defense hasn’t helped, but teams have overcome worse. You have a coach in Tennessee’s Mike Vrabel who the team responds to, with Mike Zimmer on the other sideline who can’t seem to reach this team, with his supposed defensive handiwork falling completely dead-flat to open the season.

This almost seems contrary to the way things are going. I’m going to take a few leaps of faith. One is that this is a troublesome spot for Tennessee, even without massive crowd noise being a factor. Another leap is that urgency will resonate with Minnesota. There’s something unmistakably alarming about their start to the season, but it makes me almost think it’s not as bad as it looks. Going off the first two weeks of the season and running with the story always seems to backfire. And if Minnesota did come out of the gates quickly, this spread could be 6-7 more points they would have to cover. Bad teams might not be able to simply will themselves to win and through two games, the Vikings look bad. I just see urgency resonating here with a Vikings team that is better than they’ve lookedtt. I’ll take the Vikes.

Loot’s Prediction to Cover the Point Spread: I’m betting on the Minnesota Vikings plus 2,5 points. Lots of bettors got waxed last week. If this is you, don’t re-up at your current sportsbook with no reward for yourself. It’d be smart to consider signing up at another book where you can grab some free cash via a new client signup bonus. Check out our list of the best sportsbook bonuses where you can grab up to 100% on your first deposit!