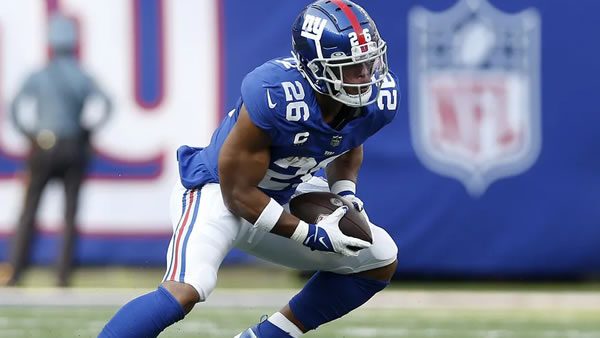 Don’t forget to set your alarm this weekend if you want to catch the New York Giants battle the Green Bay Packers in London. This is the 32nd installment of the NFL’s International Series from the UK, and it will be the first time that Green Bay has made the trip across the pond. The Giants are 2-0 in London, having played the very first NFL game in Wembley in 2007, and they won in Twickenham Stadium during the 2016 season. Green Bay isn’t as well known as New York as cities go, but the Packers are routinely fan favorites no matter where they play; we will see if there are any Cheeseheads in the UK. The Giants are one of the biggest surprises in the early going, as they have posted a 3-1 record. All four New York games have been decided by eight points or fewer and the G-Men have remarkably won despite averaging just 139 passing yards per game. Of course, it helps that Saquon Barkley is back and currently in MVP form. This one could come down to him versus the Packer’s 22nd-ranked run defense.

NFL games in London have largely been dominated by the favorites as they have run up a 22-8-1 record straight up, but they are a bit less successful against the spread, going 18-13 over the same span. The Under has been a solid play, in general, this season, and it has traditionally been a good play in London, with the Under winning eight of the last thirteen. The Giants are off to a 3-1 ATS start this season, but that still puts them 3-7 against the spread in the last ten overall. Green Bay didn’t cover last week but are one of the best bounce-back teams, going 20-8 ATS in the week immediately following an ATS loss. The Under has hit in 22 of the last 29 New York games overall, and a mediocre offense has contributed to the Under paying in four of the last five for Green Bay. These teams last met in 2019, with Green Bay netting a 31-13 victory. As usual, Green Bay is seeing about 57% of the public money and roughly 55% of the bets so far have been on the Over.

The injury bug has bitten the Giants hard, and all eyes are on Daniel Jones, who missed portions of last week’s game with a sprained left ankle. Jones has only thrown for 631 through four games, but he is one of the best running QBs in the league and scored twice on the ground against Chicago. He is second on the team with 193 rushing yards and is a big reason why the Giants lead the NFL in rushing yards per game. Jones did get in some practice work on Wednesday with the team set to evaluate his progress through the end of the week. Tyrod Taylor is in the concussion protocol, so New York would have to turn to practice-teamer Davis Webb if Jones cannot go. WR Richie James is also nursing a bad ankle, he is tied for the team lead in receptions and yards. Saquon Barkley has rewarded his most patient supporters and is averaging 5.5 yards per carry while leading all rushers with 463 yards. Barkley is tied for the team lead with 15 receptions, and he will work against a Packers defense that just gave up 175 scrimmage yards to the Patriots backfield last week. The Giants’ defense is 9th in scoring, giving up 17.8 points per game, but they haven’t faced a QB on Aaron Rodgers’ level yet. The Giants have yet to force an interception against the likes of Justin Fields and Cooper Rush, they run the risk of getting picked apart by Rodgers if they can’t get some pressure on him.

There aren’t many unchewed fingernails in Green Bay after the two-point win against Tampa and the overtime win against the Mac Jones-less Patriots, but the Pack is 3-1 and essentially right where they want to be after four games. The offense is 6th in total yards per game but has also proven inefficient, and the scoring mark of 18.8 points per contest is good for just 21st. Turnovers have been part of the problem – Green Bay has committed seven – and Rodgers has to take some of the blame with three interceptions. The young receiving corps has produced an apparent star-in-the-making, with Romeo Doubs (19-184-2) leading the team in all receiving categories, and Aaron Jones has impressed with a 6.8 yards per carry average. Allen Lazard has a touchdown in two of the three games he has played, and there has been just enough playmaking for Green Bay to crack off three wins in a row. The Green Bay defense is stout against the pass, allowing 168 yards on average, and they have given up 17.3 points per game, good for 7th in the NFL. They have only generated four turnovers, but the pass rush has been better, with Rashan Gary’s five sacks leading the way.

Packers are the Play

Green Bay is far from a perfect team at this point, but there are some signs of life in this post-Davante Adams offense. Rodgers has missed some throws and felt the frustration of playing with inexperienced wide receivers, but he is still hitting on 69% of his passes and has spread it around well, with five receivers logging double-digit reception totals. These aren’t the MVP numbers of the last few years, but #12 is still one of the best when he needs to be, and he showed that down the stretch last weekend. The Packers are going to have their hands full with a healthy Saquon, but that defense is going to be able to devote resources to stopping Barkley with a limited Daniel Jones and no definitive homerun WR in New York. Look for a close game early that is dominated by both rushing offenses before Rodgers hits on two second-half touchdown passes, and Green Bay gets the 26-16 win.

Pick to Cover the Spread: Green Bay Packers minus the points. Bet your Week 5 NFL picks for FREE by scoring a 125% real cash bonus up to $400 when you enter bonus promo code PREDICTEM at GTBets Sportsbook! They’ll also give you a free half point everytime you bet your favorite teams!