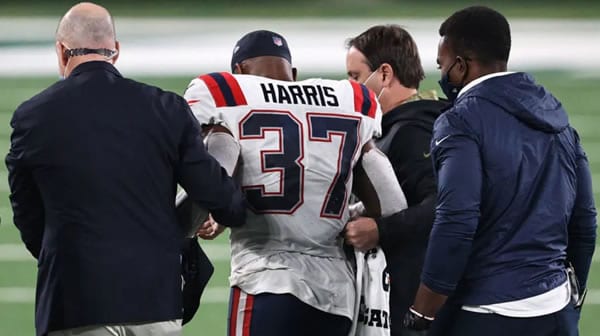 The New England Patriots head south to take on the Houston Texans for an early Sunday afternoon matchup at NRG Stadium. The Patriots hold a 10-2 all-time edge in the series and had won eight in a row before last season’s most recent meeting when the Texans were able to pull the upset for a 28-22 victory.

Wins have been hard to come by this season for Houston, and their measly 2-7 record somehow looks even worse when you consider that both times they were able to avoid defeat was against the 1-8 Jacksonville Jaguars. A player-led revolt combined with some questionable front office moves led to the removal of general manager/head coach Bill O’ Brien, but unfortunately for Texans fans, there doesn’t appear to be a quick fix remedy to get things back on track for a season that at this point can be officially chalked up as a lost cause.

The Texans already tepid running game took a hit last week when it was announced that David Johnson was being put on injured reserve due to concussion issues, which leaves just Duke Johnson and CJ Prosise as the only running backs on the roster. Or apparently, just Johnson for now as Prosise has just one carry on the entire season and only logged two snaps a week ago against the Browns. Johnson will be the clear focal point for the time being, which is a new thing for him as up until two weeks ago, he had gone 46 straight games without getting double-digit carries. Johnson hasn’t done much with the added opportunities, averaging just 3 yards per carry over the past two weeks, and things certainly appear like they will be getting worse before they get better for the Texans beleaguered backfield.

More Picks: What to bet on SNF’s Chiefs vs. Raiders >>>

One bright spot for the Houston offense continues to be at quarterback with Deshaun Watson. The Texans signal-caller is putting up some career-best stats despite his teams’ tumultuous season, currently on pace for his best completion percentage, yards per attempt, and TD/INT ratio of his career. This is made all the more impressive when you consider he is doing so without DeAndre Hopkins, who he played with his entire career before Bill O’Brien decided to moronically trade him away in the offseason for the corpse of 2016 David Johnson.

Deshaun Watson has a clear top two options in the passing game in Will Fuller and Brandin Cooks. Fuller just saw an impressive six-game scoring streak snapped last weekend thanks to their windy game against the Browns, and is currently in the midst of the base season of his professional career while sitting at 8th in the league in touchdown receptions. Cooks is in the midst of a notable receiver run as well, with at least 80 yards or six receptions in his past five games in a row. Now on his fourth team in seven seasons, the talented but well-traveled Cooks has also scored three touchdowns over his past five games after going scoreless through the four weeks of the year and will hope to take advantage of any extra attention that the Stephon Gilmore-less Patriots pass defense might put on the speedy Fuller. After those two, Randall Cobb is next on the depth chart and led the team last week with four receptions, but he also has scored just once in the past six games.

The Patriots victory against the Ravens last week gave them back-to-back wins for the first time this season, but if they want to have any chance of making a run at a possible wild card berth in the new expanded postseason system, they will have to take care of things this weekend against the Texans as they don’t have any easy games the rest of the way except for their season finale against the Jets. Four teams with at least six wins await the Patriots in the final six weeks of the season (Cardinals, Rams, Dolphins, and Bills), so they can’t afford a slip up this week in a winnable matchup against Houston.

One positive of the Patriots up and down season thus far has been the play of running back Damien Harris, who continues to look on a weekly basis like the teams’ cornerstone at the position for the foreseeable future. The former Crimson Tider is especially good at hitting holes rather than dancing around in the backfield, which has afflicted Patriots running back draft choices for years, including the present day with Sony Michel and especially in the past with Lawrence Maroney. Harris is averaging an impressive 5.5 yards per carry, which ranks tied for third in the NFL amongst running backs, but will be looking to get more scoring chances as he has just one touchdown on the season with Cam Newton dominating play calls around the goal line and scoring nine of New England’s 14 rushing TDs on the season so far.

After struggling with the offense after his return from COVID, Cam Newton is starting to show signs of life. He has improved his accuracy, completing over 75% of his passes in back-to-back games while also going three in a row without throwing an interception. Newton has also rushed for four scores over the past three weeks and finally threw his first touchdown since September last week against the Ravens. He is in good shape to continue that success this week against a Texans defense that ranks 29th in yards allowed, 28th in scoring, and dead last in turnovers caused with just five on the season, including only two interceptions.

One of the most unexpected results of the past month of New England’s season has been the play of former undrafted free agent wide receiver Jakobi Meyers, who now has gone four games in a row with at least five receptions or 60 yards receiving. He also threw the best pass of the Patriots season last Sunday against the Ravens when he hit Rex Burkhead perfectly in stride for a second-quarter touchdown that gave New England a lead they would never relinquish, and it would be easy to say that he could likely replace Brian Hoyer on the quarterback depth chart if not for their lack of wide receiver depth. Meyers was the only player at his position to record a reception a week ago, so the team will need some sort of target resurgence out of someone else on the roster if they want to give Newton and the offense a chance to succeed once they start facing the tougher part of their second-half schedule.

I like the Patriots this week because they have something still to play for with the playoffs possibly in sight while also matching up better with strength vs. weakness against the Texans. The New England run game ranks third in the NFL, and now Harris and Newton get a matchup against a Houston defense that comes in last at 32nd against the run. The only part of the Patriots defense that hasn’t been overly consistent has been versus the run, but the Texans appear unable to take advantage of that with the Ghost of David Johnson’s Past out with a concussion injury and Duke Johnson clearly not starter quality caliber. With the ground game, a near non-factor, Chase Vinovich, J.C. Jackson and Kyle Duggar, and the rest of the New England defense will be able to focus nearly all of their efforts on slowing down Watson, Fuller, and Cooks and the Houston passing offense. The Patriots need every win they can get to have a chance at getting into the postseason, and I believe by games’ end Sunday, they will leave Houston with a much-needed win and cover.

Mike’s Pick to Cover the Point Spread: New England -2. Bet this game and ALL your NFL bets at -105 odds instead of the more expensive -110 that your bookmaker is socking you! Making the switch to reduce vigorish sports betting will save you so much money over the long haul! Find this killer offer at BetAnySports!