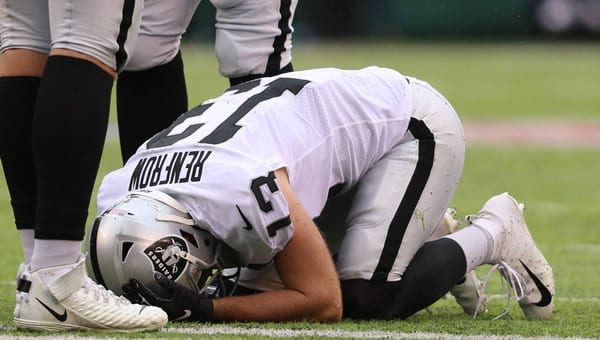 The Kansas City Chiefs come into Allegiant Stadium to take on the Las Vegas Raiders on Sunday Night Football. The Chiefs are coming off the bye, following an 8-1 start where KC has covered 6 out of 9 spreads this season. They won four straight games since their only loss of the season, with their last appearance being a 33-31 win over the Panthers a few weeks back. They now face the only team to beat them this season in the Las Vegas Raiders. On Sunday, the Raiders kept it going with an impressive and thorough 37-12 win over the Denver Broncos. They look for another divisional win this week at home. Can the Chiefs exact revenge, or will the Raiders continue their rise this week?

What Does Game One Tell Us?

Granted, previous meetings aren’t always an accurate barometer, but when those teams played about a month ago, it stands to hold some relevance. At Arrowhead, the Raiders saw most of what they were trying to do work like a charm. After a frenetic second quarter where there were six scores and the Raiders tied the game, the third quarter was strangely quiet until the Raiders started pouring it on late, taking a 16-point lead before the Chiefs added a late TD. A lot was working for the Raiders that day. Derek Carr was at 347 yards with three TDs, connecting on some deep balls on the day. Joshua Jacobs and Devontae Booker found a lot of success running the ball.

In that game, Patrick Mahomes was a bit off, going 22-for-43 with a pick. He did, however, throw for 340 yards, connecting well with Tyreek Hill and Travis Kelce. One could imagine better results with a better game from Mahomes. At any rate, it was certainly a curious game, where we saw the Raiders on the road matching up surprisingly well with a team who had recently had their measure. Their defense stepped up in key situations and was surprisingly-resilient against the high-powered Chiefs’ offense. Was that a one-off and the Chiefs will resume their dominance, or does this incarnation of the Raiders have some upside in this matchup that they didn’t previously have?

Challenges for the Raiders

When the Raiders beat the Chiefs, we saw a high-end Las Vegas team playing close to peak form. As a team on the rise, there are going to be weeks were they don’t always deliver that same level of play. And on the defensive side of the ball is where you tend to see the most variance. And they still have to assuage Mahomes, who has flashed better accuracy in the games that followed the loss to the Raiders. With 25 touchdowns and a single pick, he makes full use of an offensive cast that now includes Le’Veon Bell. Along with Clyde Edwards-Helaire, Tyreek Hill, Travis Kelce, and a slew of other key role players, a Las Vegas defense that gave up 32 to this team will be hard-pressed to keep it that low this week. Mahomes threw his only pick, completed just half of his passes, and how certain are we that he will follow suit this week coming off the bye and looking to avoid the season-sweep to their division rival?

Issues for the Chiefs

For the purposes of this matchup, the offense is less of a concern. We know the range where that side of the ball will fall, more or less. But we have seen flashes of a Kansas City defense that has perhaps taken a small step back from their Super Bowl form. While the Chiefs don’t necessarily need this side of the ball to be great, they need to be better against the run. And with the Raiders able to bring the heat with the ground-game with Booker and Jacobs, this “D” might against find itself scrambling to avoid being run over. And in both the first game with Las Vegas and in their last game before the bye, we saw a previously-solid secondary fraying at the edges a bit. This is still a playmaking defense that can make an imprint on the game, and maybe the bye week helped address some problems, but if they’re not on the good side of their form, we could be looking at a repeat of October 11.

Did the Raiders Hit Their Sweet-Spot?

With three straight wins and being unbeaten in their division, things are looking up for the Raiders. They look as good as they have in this team’s current incarnation under John Gruden. QB Derek Carr is having a very good season. Adding to the offense’s improvement is the recent upsurge of the run-game, with Booker and Jacobs really hammering the ball as of late. There may be no stars in the aerial game, and some pieces haven’t blossomed as some would hope, but there is still ample depth, and Carr makes good use of what he has.

Key to the Raiders’ recent surge is a defense that has allowed just a combined 44 points in three games since their embarrassing loss to the Bucs a month back. Sunday was a case in point, as the Raiders disrupted the Broncos into a ragged offensive showing, Jeff Heath picked off two passes, with Carl Nassib and Nick Kwiatkowski also getting picks. Maxx Crosby has been getting to the quarterback and had another sack on Sunday. And instead of people bemoaning what seemed like a slew of iffy high draft picks on this side of the ball, people are now seeing things pay off with the Las Vegas defense.

Just based on what we saw last time, it’s not hard to picture a competitive game. The Raiders are on a nice roll, and this is a game where a win could go a long way—not just in the standings but also in terms of morale. And while I think it might be tougher this time around with a Chiefs team that might be out for blood, I don’t see this being a cinch for the Chiefs. Therefore, I’ll take the points on the Raiders at home.

Loot’s Prediction to Cover the Point Spread: I’m betting on the Las Vegas Raiders plus 6.5 points. Where do you bet your games? Does your sportsbook offer you the ability to bet on games at discounted odds? If not, why not consider making the switch to BetAnySports where you only have to lay -105? This will save you A LOT of money!