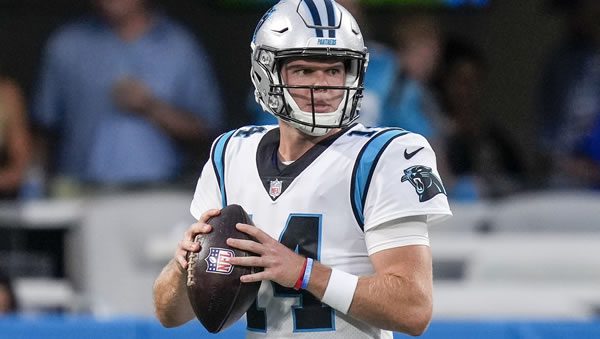 The Pittsburgh Steelers come to Charlotte for a week 15 battle with the Carolina Panthers on Sunday. Both teams enter this at 5-8, while both are 7-6 ATS. But the Panthers are coming off a nice win, beating the Seahawks on the road, 30-24, on Sunday for their second win in a row. The Steelers have been playing better lately, as well, winning two in a row before dropping a tough one on Sunday to the Ravens, 16-14. Even as people other than supporters of these teams have tuned out to some extent, those watching closely will attest that there are good things happening on both squads. Will the Panthers continue their little run, or can the Steelers continue to show the good form they’ve had on the road? Let’s break this one down!

With Kenny Pickett leaving the last game with a concussion, the Steelers might be looking at Mitchell Trubisky behind center this week. While he was somewhat prolific in relief of Pickett, he threw three picks that probably spoiled a win. Still, he has experience and started the season as the starter, so they shouldn’t be in terrible hands. We’ll also need to keep an eye on tight end Pat Freiermuth, who is questionable for this game. For the Panthers, we’ve seen the return of Sam Darnold off of IR, getting off to a fast 2-0 start as a Panther. We’ll keep an eye on top receiver DJ Moore, listed as questionable for this. If anything, these are two teams that are accustomed to rolling with the punches when it comes to personnel issues.

Matchup Issues for the Panthers This Week

While exploitable, especially against the pass, the Steelers defense can still get after it and make plays. It didn’t really surface last week, but against this Carolina O-line, maybe Alex Highsmith and TJ Watt can wreak some havoc. The Panthers, with Darnold, look to be relying more on the run. Darnold can scoot around pretty well. We’ve seen them going to Chuba Hubbard more, with D’Onta Foreman already have entrenched himself in this offense with some big games. It has given the Panthers another nice dimension, but it seems their aerial prowess is going downhill. Maybe Darnold needs some more time, but between him not really dialing it up with Carolina’s top targets and the status of Moore, this offense might not be able to pounce on Pittsburgh’s weaknesses as well as they’d like.

The Panthers also have some studs on the defensive side of the ball. With Jaycee Horn at corner and Brian Burns at defensive end, they’re capable of big plays, as we saw on Sunday against an errant Geno Smith and the Seahawks. But while there is no doubt that they’ve been playing better in spots, they are still exploitable, especially against the run. With Najee Harris showing signs of coming to life lately, along with Trubisky’s legs or Pickett if he’s in there, along with what they get out of Jaylen Warren and Benny Snell, the Steelers could make noise on the ground. And while Trubisky is mistake-prone, we’ve seen him connect well with top Steelers’ receivers George Pickens and Diontae Johnson.

Ammo for the Panthers

The overall state of their run-defense notwithstanding, it’s not that often this season that we’ve seen the Steelers pound opponents with the run. The long runs from Harris have been minimal this season, even if he has shown a nose for the end zone in recent weeks. The Steelers are really an interesting study. Before falling to the Ravens by two points, they had won three of four games, with their only loss being a one-score setback to the Bengals. If you take away that Bengals game, in the last five weeks, the most they’ve allowed was 17 points. But the Panthers have been playing defense in their own right. Before allowing 24 to Seattle on Sunday, they allowed just 38 total points in their last three games. When hearing about stout defenses, these two never come up in the discussion, but some recent results suggest a re-evaluation might be in order.

Since a 1-5 start, the Panthers have held up well. They had a midseason coaching firing, with Matt Rhule sent packing, along with Christian McCaffrey. It looked like it was shaping into a tank job, and since week 6, they’re 4-3. I don’t think a lot of people would have predicted that with their coach and top offensive threat sent packing. I think when getting into the crevasses of games like this, gauging the level of a team’s fighting spirit can go a long way. And while the Steelers have shown some of the same qualities in keeping things respectable amidst difficult conditions, the Panthers’ run in the last seven games perhaps isn’t yielding enough praise.

In a game where points might be precious, 2.5 points count for more than it might in other spots. A potential Carolina backer would have to show some concern at the lack of playmaking. With Darnold having not really struck oil aerially yet, the potential absence or compromised state of Moore, and a run-game that is usually more earnest than it is explosive, I picture the Steelers’ defense being able to hang in there this week again and force another low-point-total with some big plays. I’ll take Pittsburgh and the points in this one.

Loot’s Prediction to Cover the Point Spread: I’m betting on the Pittsburgh Steelers plus 2.5 points. Bet your college bowl game predictions for FREE by scoring a 100% real cash bonus on your first deposit up to $500 by entering bonus code PREDICTEM on the Special Offers page at the web’s oldest and most trusted sportsbook —> Everygame!