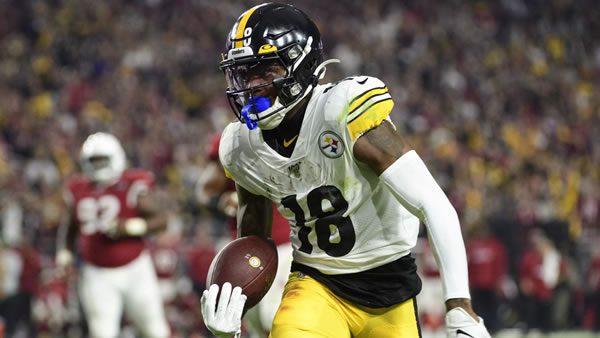 The Pittsburgh Steelers make the trip to Minneapolis to take on the Minnesota Vikings on Thursday Night Football. With the Steelers at 6-5-1 and Minnesota at 5-7, both teams really need a win. The Steelers were able to beat the Ravens, 20-19, on Sunday to get back to .500. On the short week, they battle a Vikings team that suffered a mentally-deflating loss to the previously-winless Lions, 29-27, on a walk-off touchdown with time running out. Who can deliver on the quick-turnaround on Thursday Night Football?

The Good and Bad with Pittsburgh

On a given day and in a one-game window, the Steelers can be a pretty good team. Ben Roethlisberger does have some weaponry, in the form of a young back in Najee Harris, quality receivers like Diontae Johnson and Chase Claypool, and rising rookie TE Pat Freiermuth. With some pieces back on defense, they can trouble even a stocked offense like Minnesota’s. Giving up 19 to the Ravens showed them in decent form, as we’ve seen them look like that at other points in the season, as well.

The flip side of that coin is that the Steelers don’t always surface as they did last week. They allowed 41 points scoring in each of their previous two games leading to last Sunday. Against less-struggling opposing offenses, that defense can be run over on occasion. And let’s face it, Roethlisberger is at the end of the line and that’s something that could show on a short week like this on the road. That offensive line is laughable, leaving opportunities for the Vikings’ pass-rush and making it hard for Harris to really flex his running chops.

In some ways, the Steelers match up decently with the Vikings’ offense, flexing two receivers who can make a big impact, a viable tight end, and good running back play. It’s just that the combination of Justin Jefferson and Adam Thielen (questionable) are more-dependable and on the right day, more explosive than what Pittsburgh can bring to the table aerially. Their run-game resonates with more regularity than the Steelers’ does. And let’s face it, for all his faults, Kirk Cousins is considerably more-spry than his counterpart in this contest.

Consecutive wins over the Chargers and Packers a few weeks ago had people thinking the Vikes could turn this around, but losing to the Niners and Lions have put them on the precipice of another failed season. We could be looking at a lame-duck coach in Mike Zimmer and it’s really a shame. Injuries have helped render what could have been a good defense into a poor one, exploitable aerially and on the ground. And it’s not just the injuries, as the defense has this real underachieving vibe to it. This was in evidence on Sunday when the Vikes couldn’t hold onto a lead late, letting the Lions drive 75 yards for the winning score. They didn’t attack, opting for that “don’t let the house cave in” approach that usually leads to the house caving in.

The Vikings can also get very little out of what they have. On Sunday, Cousins went for a robust 340 yards. Alexander Mattison caught several balls, while running a TD in on 90 yards rushing. Tyler Conklin caught seven balls, while Justin Jefferson was immense with 182 yards on 11 catches with a TD. So three TDs on a day like that is a little light. They only had two field goals in the first half, as the Lions took a 20-6 lead. The Vikings were able to use their firepower to get back in the game and take the lead, before being let down again by the defense.

Obviously, if Jared Goff and his bare cast of playmakers can make things happen against Minnesota, so can the Steelers. With news coming out that this is it for Big Ben, maybe there’s some extra mojo that comes with that. Certain things can fall into place when the end is so near. I’d expect a real strong effort for the rest of the season from this bunch. And this is a spot, albeit in a somewhat-foreign road locale, where the Steelers’ offense can make some inroads. Maybe the sorry state of the Steelers’ offensive line comes less to light this week. With Johnson, Claypool, and some nice role players, Big Ben could be in line for a decent aerial day. With Harris running the ball and a maven at short dump-offs, it could give this offense the variety they need to take it to a beleaguered Minnesota “D.”

How this season ends up with the Steelers is anyone’s guess, but at 6-5-1 in a division where the Ravens are struggling and Cincy is far from failproof, they’re still in this. Contrarily, while the Vikes are in second place, a road to a postseason slot is hard to envision. So on one sideline, you have a former multiple Super Bowl-winning QB coming to the end of the rope with a team that’s still in it and coming off a big win. On the other sideline is a team that probably knows this regime is finished in the midst of a season that is all but lost. It paints a stark picture.

Deferring to Minnesota’s greater offensive potential in a spot like this is understandable. They certainly have what it takes to pepper the Steelers with big plays and scores. I just don’t think they’ll get the same potential on the other side of the ball as they might get on offense. Not that the Steelers don’t have a whole host of issues that could surface here. I just see them as a team that while not being explosive, is a little better-rounded overall and in a headspace more suited to being able to come up with something good on the short week. I’ll take the Steelers.

Loot’s Prediction to Cover the Point Spread: I’m betting on the Pittsburgh Steelers plus 3 points. Bankroll take a hit last week? Instead of re-depositing for NOTHING at your current online sportsbook, consider checking out our best sportsbook bonuses page where you can boost your roll with a 100% real cash bonus!