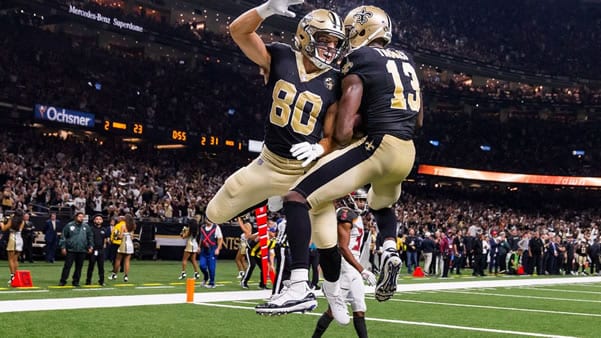 Offense meets defense on the shores of Lake Michigan, as the Bears try once again to prove that they’re for real after failing to do so against the Rams. Chicago’s defense was rock-solid again in Southern California, but the offense was putrid and went absolutely nowhere against Los Angeles, resulting in their second loss of the campaign. At 5-2, there are still plenty of questions as to whether the Bears are really that good, but if they can get through this game and next week’s trip to Tennessee with a split, it’s hard to see them missing out on a trip to the playoffs with how soft their remaining schedule is.

On the other hand, New Orleans has plenty of believers and little defense to back it up. The Saints remain dynamite on offense, having scored 24 or more in every game they’ve played this season, but they’ve also given up at least 23 in every game they’ve played this season. Since Week 2, the Saints have been on a constant roller coaster because of their inability to stop anyone. New Orleans is never out of a game thanks to Drew Brees and friends, but you can also never truly feel safe giving points with this team. Bettors really haven’t felt safe all year with the Saints; they’ve only managed to cover in one of their past five games.

How the Public is Betting the New Orleans/Chicago Game

The public lost a lot of faith in the Bears during their Monday night showing against the Rams. The line moved from -2.5 for New Orleans to -4, and the total dropped from 47 to 43.5.

When your best running back is also your best receiver, that can be a problem, and it has been for New Orleans. With Drew Brees having to play with his mind more than his arm strength at the age of 41, New Orleans has had to be more selective about when and how it attacks than it was during the quarterback’s prime. Brees’ average of 7.6 yards per pass is the lowest he’s had since 2014, and more of those passes are going to Alvin Kamara.

Kamara is a reliable pass-catcher, but opponents are more than happy to give the Saints six or seven yards on passing downs and hope to stop the Saints on running plays. So far, it’s been an effective strategy. When Kamara gets nine or more targets, the Saints are 1-2, with the one win coming in overtime. When Kamara gets eight or fewer, New Orleans is 3-0, with all three wins coming in regulation.

Getting Emmanuel Sanders back on the field would be a big help in shifting away from using Kamara as a pass-catcher and instead using him on the ground and attacking through the air. In New Orleans’ past two victories, Sanders had 18 catches for 215 yards, giving the Saints that weapon they need in order to stretch the field enough to keep Kamara churning out yards.

Chicago’s offense was struggling enough with Allen Robinson on the field. Without him, the Bears might reach avert your eyes levels. Robinson has one-third of the Bears’ receiving yards for the season and more than double the catches of any wide receiver or running back (the one exception is the tight end, Jimmy Graham). Plus, Chicago doesn’t really have the running game to keep the Saints’ offense off the field or control the clock. David Montgomery averages 14 carries a game, and he manages just over 50 yards a game.

That’s losing football, and it’s why it’s frankly amazing that the Bears have managed to win five games to this point in the season. Chicago is pretty much all defense, all the time, and when the Bears do put a drive together, it’s more likely to end with a field goal if it ends with points. The simple fact is that Nick Foles is not much of an improvement (if he’s an improvement at all) on Mitchell Trubisky, but Chicago’s defense might be good enough that it doesn’t even matter.

Whether the Bears have a chance in this game will be determined by whether Chicago can hold on to the ball and make the most of their possessions. They don’t have to and can’t win a scoring contest with New Orleans, but they can win a defensive battle.

Dome teams are supposed to be poor when they leave their controlled climates, but the Saints have actually been pretty solid as a road favorite. New Orleans has covered in five of its past six games as a road favorite, and when facing a team with a winning home record, the Saints are 20-6 ATS in their past 26 road games. However, 2020 has been somewhat different for New Orleans, as the Saints are just 1-4 ATS in their past five against a team with a winning mark.

For Chicago, the problem has been sustained success. The Bears have covered just once in their past five after an ATS win, but they’ve also done well against conference foes. Chicago has covered in four of six against NFC opponents, with the Rams and the Giants being the two exceptions.

As for the total, something has to give. New Orleans has hit the over in all six games this season, while the Bears games have gone UNDER the total in four straight. Additionally, the UNDER is a profitable 5-1 in Chicago’s last six as a home dog. In the series, the Saints are a nice 5-1 versus the spread in the previous six meetings, and the UNDER is trending, going 4-1 in their last five.

This will be a typical November game in Chicago, with temperatures hitting 43 degrees and partly cloudy skies.

With New Orleans’ tendency to play close games, I’d grab this number now or possibly tease it down a point or two. The Saints are the better team, but the Bears’ defense is so good that it could really throw New Orleans off its game and force this game to be a closer battle than people expect. I think the Bears’ defense keeps it close, but the Saints will have enough to get the cover in this battle.

I’d also lean toward the over because the total on this one is so low that the only way the under hits is if the Bears get blown out from start to finish. It might not be pretty, but I’ll go with the Saints and the over here. Hey! Are you laying -110 odds when you place your bets? WHY? You could be laying less (-105) at BetAnySports! Stop wasting you money, start betting smarter at reduced juice -105 at BAS!