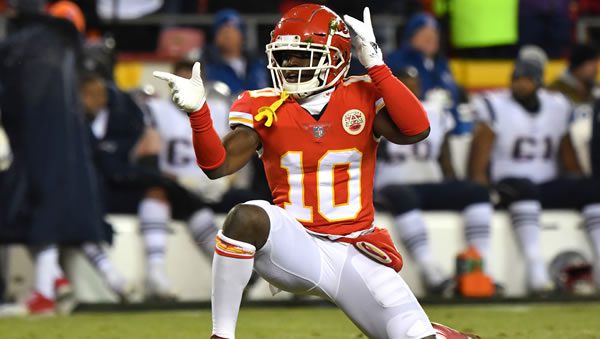 Point Spread: KC -3.5/BAL +3.5 (Bookmaker - One of the oldest and most trusted sportsbooks online! In today’s crazy world, that matters!)

Strap up your boots and get ready for a 5 Star Prime Time game this week when the Chiefs invade Baltimore to face off against the Ravens on Sunday Night Football. Both teams are super bowl contenders, and Betanysport.eu has made the Chiefs 3.5 point road favorites and set the game total at 55. It’s a tough proposition in the NFL to play road favorites, but let’s bite the bullet and ride with the Chiefs. Here are three reasons.

The unquestioned best player in the league gets a chance to prove it to the world on National TV Sunday Night. Mahomes is now 11-0 as a September starter, so we should expect KC to win the game, so the question becomes can they cover the spread. Mahomes was brilliant in Week 1 against the Browns at home, and we should expect nothing less this week. The Chief defense looked like it wouldn’t get a stop against Cleveland, so Mahomes knew he would have to score every time he got the ball, so that’s basically what he did. After the intermission, the defense finally made some plays, and the Chiefs won the second half 23-7. Mahomes and Coach Andy Reid will have to try and get more weapons involved in the attack, as only Tyreek Hill, Travis Kelce, and Clyde Edwards-Helaire contributed to the offensive production in week 1. Teams have been trying to shut these three down for a while and haven’t figured it out yet, but Mahomes will look to get either Mecole Hardman or Byron Pringle some touches in Baltimore.

Baltimore’s defense was set to open the year with the best trio of cornerbacks in the league until their rash of ACL tears hit No. 1 cover man Marcus Peters. Peters would have matched up with Hill this week, but now Marlon Humphrey draws the speedster. The loss of Peters undoubtedly contributed to the surprisingly dismal performance of the Baltimore stop unit against the Raiders. Peter’s absence will have a bigger impact this week as Humphrey will require a lot of help, which will trickle down to the other Chief pass catchers, including Kelce getting less attention and having bigger nights.

The Ravens are one of the heaviest blitzing teams in the league, leaving their cover guys one on one on the outside. Mahomes thrives against the blitz, and Kelce and Hill can’t be single covered, so that that strategy won’t work. If Baltimore decides to drop back and play a bend-but-don’t break zone, Reid will run the ball or take the short passes to move the ball down the field. Baltimore’s defense was bad against the Raiders Monday night, but Derek Carr missed open receivers on multiple occasions, which Mahomes won’t do, so this could be a long night for the Baltimore D.

Lamar Jackson reminded us again in Vegas on Monday that he is a human joystick running the ball. That is great against bad defenses when the Ravens are ahead, but as we saw in Vegas, that’s not enough when the game is tight. Baltimore has to be able to pass the ball down the field and has help from the running backs to score enough points to keep up with KC on Sunday. With their string of running back injuries in pre-season, coach John Harbaugh is counting on Latavius Murray and rookie Ty’son Williams to carry the load. Williams is a little raw but looked good Monday, while Murray looked slow and showed why the Saints cut him loose. There is no reason to expect the passing game to be better this week than it was last week. Sammy Watkins, Hollywood Brown, and Mark Andrews do not impose fear in their opponents – at least not with Jackson delivering the ball. Baltimore told us that they needed help in the passing game when they selected Rashod Bateman with their first draft pick, but Bateman is on I.R. and won’t help again this week. Jackson and the Raven offense looked out of sync Monday against a bad Raider defense, and I think it will be more of the same this week.

The Chiefs defense is the perfect defense to match with their offense. They know they can give up 24 points and win 95% of the games, so that’s what they do. They can look horrible as they did in the first half of week 1, but come back and force a couple of punts and walk off with a win. They don’t have the pressure of knowing they have to hold the opponent’s scores in the teens, so they can take chances and dial-up pressure on their opponents. Chris Jones is one of the best linemen in the league, had two sacks, and caused a lot of havoc last week for Baker Mayfield. The Ravens gave up three sacks against LV, so Jones and KC will get pressure on Jackson – and Jackson will either give the ball up or try to do too much with his legs. This game happens at a bad time for Baltimore as they are trying to figure out the running back position, so look the Chief defense to win this battle.

The Chiefs Own The Ravens

These teams have met in each of the last three years, and KC is 3-0, including a 34-20 victory in Week 3 last year. This matchup is the hurdle that Jackson needs to get over to have a chance at winning a Super Bowl but hasn’t yet been able to.

This game will be won by the team with the quarterback better capable of attacking the whole field, and there is no question who that is. Baltimore has great coaches, but on top of elevating Jackson’s game to throw outside the numbers, they now have to deal with their injury issues. On the flip side, Andy Reid will watch the tape of the Raider game and lick his chops at the opportunities on both sides of the ball. Baltimore just doesn’t match up well with KC, especially with its recent injury rash.

Expect the Chiefs to win this game

The line is troubling as it would have been under a field goal had Baltimore taken care of business in Vegas. KC closed 2020, winning a lot of games but giving up back door covers, and they didn’t cover the 5 point spread last week. I still expect KC to cover the 3.5 points but would wait to see if the line drifts back to a field goal and take the -3 as soon as it does. Another way to get at this game is a money line parlay. You can take the Chiefs and Browns (over Houston) on a money line parlay paying -133, or just play the Chiefs ML at -190. One way or another, investing in the Chiefs this week is the way to go. Bet your Week 2 NFL picks FREE by taking advantage of a 100% REAL CASH bonus on your first deposit of $100 to $1000 at Betnow Sportsbook!