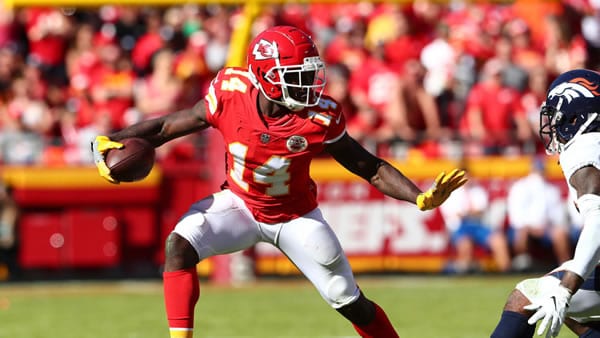 At least Denver will have a quarterback for this game, which is more than the Broncos could say for their defeat against New Orleans. Kendall Hinton tried his best, but with no preparation running the offense, there was never any chance that he was going to lead Denver to an upset. With Drew Lock likely to play after getting through quarantine, the Broncos will at least have a puncher’s chance.

However, that might be all that Denver has against a Kansas City squad that has beaten them in 10 consecutive meetings, including a 43-16 rout when the teams met in Colorado earlier this season. Denver hasn’t come within 20 points of Kansas City in any of the past three meetings, and only one of the Broncos’ past four trips to Missouri has seen them stay within 10 points.

On the other hand, Kansas City has been winning but not blowing out its opponents as of late. The Chiefs have won their past six games, but they’ve won their past three games by a total of nine points. Having a tight battle with the Buccaneers was expected, but Carolina also pushed the Chiefs to the limit, despite the Panthers being a 4-8 squad with little hope of a playoff spot. It’s very possible the Chiefs are now feeling the pressure that comes with getting everyone’s best shot, and if that’s the case, there’s a chance for Denver. Can the Broncos finally end their five years of futility at the hands of their Interstate 70 rival?

How the Public is Betting the Denver/Kansas City Game

The public seems pretty sure about how this one’s going to go. Despite the Chiefs giving two touchdowns, 84 percent of the sportsbook tickets are on Kansas City, and the money is with the Chiefs as well. The spread has jumped a point from -13 to -14, and the total is up to 51 from an opening of 48.

The most important thing Denver has to do in this game is not shoot itself in the foot. The Broncos never gave themselves a chance in the first meeting because they handed Kansas City two touchdowns without the Chiefs ever touching the ball. In the second quarter, Denver trailed just 10-6 when Drew Lock tossed an interception for a touchdown, putting the Broncos in a quick double-digit hole. Denver did get a field goal on its ensuing possession, but Kansas City immediately took the kickoff back for a touchdown, turning the game from a 10-6 battle into a 24-9 rout.

In order to keep this game close, Denver has to avoid giving the Chiefs free possessions, and that means that Lock can’t throw any interceptions the way that he did in the first game. The Broncos finished with four turnovers against Kansas City, and two of those were interceptions from Lock. Part of that was because he had to throw 40 times, which is not what Denver wants or needs to do in this game. Kansas City is very weak against the run, and Denver can move the ball on the ground if Phillip Lindsay is healthy.

The way the Broncos stay in the game is with long drives that keep the ball out of the hands of Patrick Mahomes. Denver ran 73 plays to Kansas City’s 47 in the first meeting, which is exactly how the Broncos need to play to have a chance. But when you give Kansas City free points with turnovers — not to mention giving up touchdowns to the Chiefs’ defense — you are in big trouble.

Lost in the Chiefs’ rout of Denver last time was the fact that Kansas City didn’t even play all that well on offense. Patrick Mahomes was ordinary, completing 15 of 23 passed for 200 yards and a score. The Kansas City running game was fairly pedestrian, gaining 101 yards on 22 carries. But the Chiefs didn’t need to be great on offense because Denver spotted them 24 points on defense and special teams, making Kansas City’s job incredibly easy.

Odds are that Denver won’t be in such a giving mood this time, so the Chiefs have to be ready to go out and win it without the Broncos’ help. That shouldn’t be all that difficult because Kansas City continues to put up points like nobody’s business. Only Green Bay’s offense has been more effective at scoring than the Chiefs, who boast the No. 1 passing offense in the league. What makes Kansas City’s offense so impressive is that Mahomes doesn’t turn the ball over, and the Chiefs dominate with only two targets getting most of the attention. Tyreek Hill and Travis Kelce have combined for 142 catches and 1,999 yards, making up over 56 percent of the Chiefs’ passing offense on their own.

When a team this talented doesn’t turn the ball over (only Tennessee has fewer turnovers this season than Kansas City’s eight), it’s difficult to get a result against them. As long as the Chiefs don’t stop themselves, they should have little trouble putting up a big number on offense, and that’s proven true all season. Other than Week 2 against Los Angeles, the Chiefs haven’t scored fewer than 26 points in a game this year.

Say this for Denver: the Broncos don’t quit. In its past eight games, after taking a loss against the spread, Denver has bounced back and covered seven times. Plus, the Broncos are 9-3 ATS when they’re coming off a straight-up loss.

However, Denver has really struggled inside the division. In their past 29 against the Chiefs, Raiders, and Chargers, the Broncos have covered just eight times. Kansas City, in particular, has brutalized the Broncos, covering in nine of the ten meetings during this winning streak. History says that’s likely to continue because Kansas City has been at its best in the final month of the season. The Chiefs have covered in five of their past six in December and have been excellent at Arrowhead, covering nine of their past 12 home games with one push.

As for the total, Kansas City’s past five in its own division have seen four go over the number, with the lone exception being that early-season battle in Los Angeles. That fits with past history here: four of the past five Chiefs-Broncos matchups in Arrowhead have either gone over the total or hit it exactly.

It’ll be calm, clear, and cold in western Missouri, with temperatures dipping to 27 degrees and the wind blowing five miles per hour to the west-southwest. No rain is in the forecast.

Fourteen points is a lot, but it’s difficult to see how Denver covers this given what the Broncos have done against the Chiefs as of late. Denver is already out of the playoff race after the farce that the NFL put it through a week ago, and with Kansas City chasing Pittsburgh hard for a first-round bye, the Chiefs are likely to hit the gas and leave the Broncos in the dust.

Try as I might, I just can’t see Denver keeping this one close unless Kansas City starts feeling the pressure and lets the Broncos hang around. I’d personally bet the over, but if I’ve got to make a pick, I’ll eat the huge chalk with the Chiefs here. While we’ve got your attention, please take a second to read this. It will save you thousands of dollars and no, this is not some cheesy ad looking to bilk you out of anything. When you bet on games, there’s a 98% chance that you’re laying -110 (or more) odds on games. Did you know that you could be making the very same bets for -105 odds? This essentially saves you $5 per $100 in risk. It doesn’t matter whether you bet $5 per game or $500, the savings happens at the same rate. Betting on games at -105 instead of -110 will save you THOUSANDS of dollars over the long haul. Signing up at our advertiser also helps us stay in business and provide you with free entertainment. Please do us both a favor and sign up at BetAnySports Sportsbook. You’ll be so glad you did! They have a GIANT wagering menu and teaser up to 20 points! We’ve advertised them for 10+ years with not one complaint! Click here to start betting smarter today!