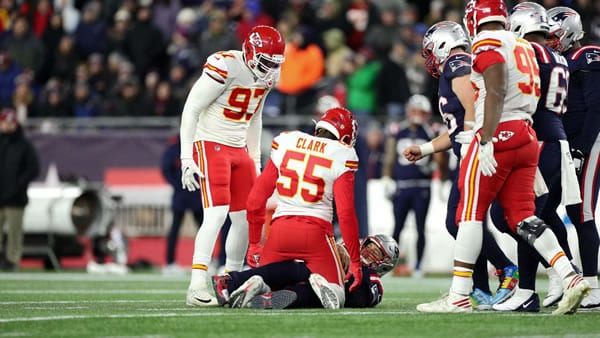 That is reflected at the top of the list of Super Bowl LV contenders, with the top-seeded Chiefs and Packers atop the board at +200 and +450, respectively. That extra game they don’t have to win carries a lot of weight. But below them are any number of realistic contenders. And while the Chiefs and Packers are unquestionably good teams, they aren’t so unbeatable that you would rule out some of these other contenders. Some of them have a lot of upsides. It’s been a crazy season, and this postseason could easily follow suit.

There are a few different ways to go about this. You can latch onto a single team that you think has the best chance of winning and just go with that. Another ploy is to spray the board a little bit. In a season like this where you can perhaps justify a wider range of positions, there are some juicy underdogs on this board. You have everything from a 2-to-1 shot in the defending champion Chiefs to an 80-to-1 longshot in Washington. In between are a lot of plausible selections. Let’s break down each playoff team’s chances to win Super Bowl LV!

A Look at the Contenders

It’s hard to deny the Chiefs respect, even at these odds. When making Super Bowl futures bets, even at this stage, it’s not easy to bet on such short odds. And while something about the Chiefs seems more beatable this postseason, and it is a tough conference to get through, having +200 on the Kansas City on the eve of the big game would be a good feeling. It’s a very understandable pick.

The top seed of the NFC, the Packers had another fine season, their second 13-3 record in a row. It’s not that hard imagining them thriving at home in the cold throughout the NFC playoffs en route to the big game. Opponents will be facing two opponents at Lambeau this postseason. But I’m not sure winning two tough games and then a Super Bowl where they’re likely to be underdogs doesn’t warrant a little better than +450.

Those looking for better odds have a lot to hang their hats on with the Bills. When on, they look as good as any team in the league, with QB Josh Allen stepping firmly into elite status with his performances this season. The road is going to be treacherous, with an AFC playoffs where there aren’t many weak spots. If they beat Indy this week, they get the Chiefs in the divisional round at Arrowhead. Then they still have to win the AFC title game and beat whoever comes out of the NFC. It’s a lot to ask. Still, it’s an interesting pick.

DID YOU KNOW… THAT YOU CAN BET ON GAMES AFTER THEY START? LIVE IN-PROGRESS BETTING IS THE NEWEST THING SINCE SLICED BREAD! POINT SPREADS, MONEY LINES, TOTALS AND PROPS TOO! FIND THE BEST LIVE BETTING PLATFORM ON THE WEB AT BOVADA SPORTSBOOK! CREDIT CARDS WORK THERE + YOU GET A 50% CASH BONUS!

Despite a lot of issues, they were 12-4 and really put a lot into making a run with the hourglass on Drew Brees running out. The road won’t be easy, with a stopover in frigid Lambeau if they beat the Bears in the Wild Card round, but it’s really a lot of team for an 8-to-1 fourth choice on the board.

Not in a bad spot; they get Washington in the Wild Card round before playing the winner of the Seattle-LA game. A possible NFC title game in Lambeau seems like a really tough spot, not to mention beating whoever emerges from the AFC. They’ve been a team with such a wide range, and they’ve already lost this season to some of the teams they’re likely to face. But you are getting Mr. Postseason in Tom Brady at 10-to-1, and you can’t really scoff at that completely.

In a weird way, their issues this season made it so you can get them at a more-realistic 11-to-1, as compared to the chalk they were getting early. And five straight wins to end the season, along with a winning formula predicated on a heavy-duty running attack with a big dose of “D,” makes them a team other contenders won’t be eager to face. But they have to exorcise their demons with Tennessee in the Wild Card round, likely go into Pittsburgh, and then face Buffalo or KC in the title game. It’s a hard road indeed—and that’s just to get to the big dance.

FREE SUPER BOWL BETS! SIMPLY DEPOSIT $100 TO $1000 AND BETNOW SPORTSBOOK WILL DOUBLE YOUR DEPOSIT WITH A 100% REAL CASH BONUS!

The Steelers’ recent form has caused the odds to drop precipitously to a more-appealing 22-to-1. But it is that form that makes it hard to pull the trigger on a team that really floundered over the last five weeks of the season. There are signs that they could revert to previous form, and if that’s the case, it’s a bargain.

A team that has been lost in the mix. They get a team they beat last postseason with the Ravens in the Wild Card round, then the winner of the Steelers-Browns game to return to the AFC title game for the second straight season. Then it gets really tough. But with the exploding late-season form of Derrick Henry, you get some bang for your buck at 25-to-1. An interesting pick.

The Rams have a stellar defense but are wildly inconsistent, especially in the upper reaches of the competitive ladder. With Jared Goff’s status iffy and going into Seattle in the Wild Card round, this will be a tall order from the get-go, and they will have to do it all on the road. Money might be better spent elsewhere.

It’s a nice team with upside and a certain X-factor quality that is hard to define. They can play defense and are running the ball well, and that goes a long way. But they get a road-game against Buffalo, and if they were to get through that, they’d be on the road at the Chiefs. That’s a lot of work just to get to the conference title game, and then they still have to win two games. That is asking a lot to pick up even a 33-to-1 score.

Weirder things have happened, but they aren’t very inspiring right now, and this could be over in the Wild Card round against Pittsburgh on the road. If not, the road to the Super Bowl is hard to fathom, unless both sides of the ball maxed out their potential and they were to catch fire suddenly. A little out of range.

In a crazy season, why not make a crazy pick? A 5-1 start dissolved into six straight losses, but three wins in their last four have them looking a lot more respectable. Still, they have to beat the Saints on the road, go into Lambeau and win, and they’re still just in the NFC title game. I’m not sure 66-to-1 is enough for them to run this table.

Sure, they won the NFC East almost by default, and they didn’t really look great to end the season with two losses and then a win over Philly to get in the playoffs that was tougher than it should have been. But a 5-2 record in their last seven games, a Cinderella story with Alex Smith at QB, and a conference where a team like this could conceivably wiggle through, there are worse 80-1 longshot than Washington.

Kansas City Chiefs +200: So many weapons! This team is superior, and even if their defense falters, they have the ability to outscore any opponent in the NFL.

Tampa Bay Buccaneers +1000: This team possesses the best balance of offense and defense in the field of fourteen. They’ve got a smart coach, a seasoned QB who has “been there,” and have a defense that can shut other teams down when motivated.

It’s possible that these two teams meet up in the Super Bowl. If that were to happen, I would expect the Chiefs to win as if TB has any vulnerabilities, it’s their secondary. Bet ALL your playoff picks (as well as hoops) at -105 reduced odds at BetAnySports! Stop overpayinag! Start taking advantage of discount pricing! It’s dumb/inefficient/crazy to lay $5 more at a sportsbook that is probably not as solid as BetAnySports!