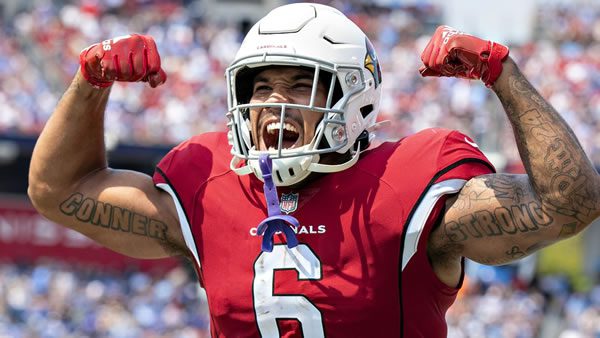 Point Spread: TB -6½ / Az +6½ (Did you know that you could be betting on games at -105 instead of -110? This is SUPER important as it lowers your breakeven percentage! Find this huge money saving offer at BetAnySports!)
Over/Under Total: 41

It’s Christmas Night Football in the desert, as the Tampa Bay Buccaneers take on the Arizona Cardinals. Both teams have played 14 games this year, but they have combined to cover only nine times for their backers. BOVADA.LV is making the Bucs 6½ point road favorites and setting the game total at 41. Let’s close our eyes and count on Tom Brady to find a way to cover the spread for Tampa Bay. Here is the handicap.

Arizona’s Offense Will Be The Worst Unit On The Field

The Cardinal attack wasn’t very good when Kyler Murray was leading it, then slightly worse with Colt McCoy at the helm, but is taking a huge step down with Trace McSorley behind center. On the year, Kliff Kingsbury’s offense ranks 18th in points scored but ranks 28th, gaining only 4.8 yards per play. McCoy is a competent backup whose passing stats are similar to Murray’s, but of course, there is no electric running ability. However, McCoy suffered a concussion last week against Denver, so although there is a chance he clears the protocol and can suit up, it is likely we see McSorley for 60 minutes Sunday night. The Penn State graduate has completed only 18 of his 39 NFL attempts through 4 years. So despite having quality outside receivers DeAndre Hopkins and Marquise Brown, there is almost no hope for Arizona’s passing game. This means the burden to move the ball for the Cardinals will fall on James Conner. Conner has been steady and is a capable ball carrier, but he can’t be the focal point of the offense. Arizona averages about 120 yards per game rushing, but Murray accounts for about 30% of those yards. McSorley helps in the running game more than McCoy, but there should be no expectation Arizona can dominate the line of scrimmage this week and run to a win or keep the game close.

Making matters worse for the Cards, the strength of the Buc defense is against the run. They have looked bad against elite rushing teams like the Browns and 49ers, but in their recent games against the Rams, Saints, Seahawks, and Bengals, they allowed an average of only 56 yards per game on the ground. Todd Bowles should have both of his starting tackles – Vita Vea and Akiem Hicks on the field together for the first time in a long time, which will make the rush defense even more stingy. When McSorley is called on to throw the ball, he won’t have good results. Bowles will draw up exotic blitzes to confuse the signal caller, and it could get ugly. The Bucs are 6th in the league at sacking opposing QBs, Arizona’s offensive line is in shambles, and McSorley will be running for his life. I don’t think there is any way the Arizona offense will generate 14 or more points this week.

Tampa Must Take Care Of The Ball

Last week against the Bengals, Tom Brady and Tampa’s offense had their best half of football this year and took a 17-3 lead into halftime. Brady was finding Mike Evans and Chris Godwin down the field while Leonard Fournette and Rashaad White were having success on the ground. The second half was a complete disaster, starting with a failed fake punt, then two interceptions and two fumbles. Cincy’s defense stepped up and put pressure on Brady and made the big plays to turn around the game. Brady has to look at last week’s results and know that if the offense takes care of the ball, they probably win last week and should definitely win comfortably this week. We have been waiting all year for Brady and the offense to flip the switch and get on track. That is becoming less likely every week, but it is possible that the first half of last week’s game gives some hope that there is life left in this offense. This date with the Arizona defense may be just what the Doctor ordered.

The Cardinal defense allows the most points in the league – 26 per game. They have only 31 QB sacks on the year, which includes seven last week against a totally lost Brett Rypien. Though the defensive line was getting pressure last week, they allowed Denver to run the ball for their most yards in any game this year and allowed Rypien to throw for just under 200 yards. No matter how bad Brady and the Buc offense have looked this year, they have to be better than Rypien, Latavius Murray, and the Bronco attack. Arizona’s defense is 25th in the league at stopping 3rd down conversions and allows the highest touchdown rate when their opponent gets inside the RedZone. There is no redeeming quality for this defense. We have waited a long time for a competent performance for the Tampa Bay offense, and I think we get it this week.

Arizona Has Thrown In The Towel

The Cardinals have been a dysfunctional team all year, but last week against the lowly Broncos, any semblance of a team trying to make their last stand disappeared. J.J. Watt was on fire early, and the other veterans looked inspired until Denver outscored them 21-9 in the second half. Kingsbury is not exactly a master motivator, and there is a good chance he has one foot out the door, so don’t look for him to rally the troops for one last stand. As stated above, the Bucs will be a playoff team this year, so they have a lot to play for. I think they will come together on this national TV stage and give an A+ effort.

Lay The Points With The Bucs

Tampa Bay has only covered three spreads this season and only one since week 2. These records generally even out over the year, and I think that starts this week. We can’t invest our hard-earned money on Kliff Kingsbury and Trace McSorley, so let’s count on Tom Brady to put together a solid 60 minutes and cover the 6½ point spread in the desert. Play Tampa on Christmas night. Bet your sports picks for FREE this week by scoring a 100% real cash bonus up to $300 by entering promo code PREDICT100 at MyBookie Sportsbook!)