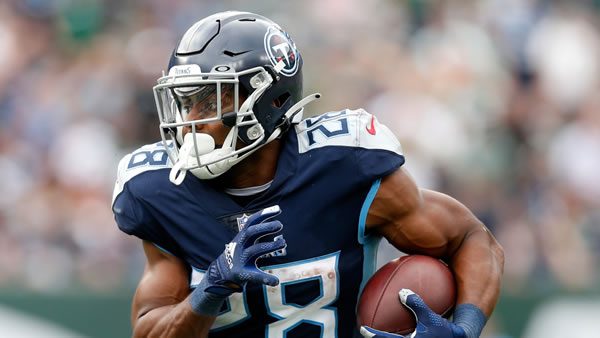 Point Spread: Ten +6.5/LAR -6.5 (Bovada - If you partake in Live Betting, you have to check these guys out. The best live wagering platform BY FAR! Plus, you get a 50% real cash bonus!)

Sunday Night Football week 9 comes to the City of Angels, as the Tennessee Titans visit the Rams. Unfortunately, the Titans will travel west without All-World running back Derrick Henry, who is on IR with a foot injury. With the injury, Betanysports.EU is making the Rams 6½ point favorites and set the game total at 54. Let’s lay the wood with the Rams and count on the home team to cover the near touchdown spread. Here are three reasons.

The Rams will bring the NFL’s 3rd rank scoring offense with the 2nd best yards per play average into this game. Since dropping a Week 4 contest with the Cardinals, LA has averaged 32 points per game against some mediocre defenses, and that is what they will be facing this week. Matthew Stafford has been everything Sean McVay hoped he would be, completing just under 70% of his passes while averaging over 9 yards per attempt and connecting for 22 touchdowns. Cooper Cupp and Robert Woods continue to be a top-notch 1-2 punch on the outside, and McVay sprinkles in a little DeSean Jackson and Van Jefferson deep to keep the defenses honest. Darrell Henderson has flourished in McVay’s run scheme and will keep the Titan front seven focused on the run. Henderson averages 4.6 yards per attempt and has reached the end zone 5 times. McVay has longed for a quarterback like Stafford for years, and the combo of McVay and Stafford are developing into what might be the top offense in the league. They are scoring early and often and putting opponents in the hole, and they could easily repeat that again this week.

Tennessee’s defense has had ups and downs this year. They kept Patrick Mahomes and the Chiefs off balance and held them to 3 points but sandwiched that with allowing the Bills and Colts 31 points each before and after. Harold Landry leads the defense with 8.5 sacks and will look to get after Stafford, but Stafford has only taken eight sacks on the year, so Landry will have his work cut out for him. The Titan defense has a solid defensive line, but they can’t match up in the defensive secondary with the Rams. If they can’t pressure Stafford, which they probably can’t, it could be a long day for the Titan defense. Look for LA to keep up their pace of 30+ points per game and make the Titan offense keep up.

Does No Derrick Henry = No Points

The Titan offense is run Derrick Henry and then mix in play-action passes. In a passing league, Henry was the most difficult player for defenses to play against, not because of the strategy involved but because nobody wanted to tackle Henry as the game went on. Now Tennessee will have to go to plan B. Plan B appears to be 36 year old Adrian Peterson, just signed off of the street with Jeremy McNichols taking the passing down work. I just can’t imagine defensive coordinator Raheem Morris losing sleep this week worrying about Adrian Peterson. Quarterback Ryan Tannehill has thrived as a play-action passer, with Henry being the focus of the defense, but now he will have to put the team on his back. A.J. Brown is a more than capable wide receiver, but with Julio Jones providing almost no support this year due to nagging injuries, teams will focus on taking Brown out of games. The Titans move from being a top-5 offense with Henry to being a middle-of-the-pack offense at best. Their line is good but can’t dominate a defense. We’ll have to see what Offensive Coordinator Todd Downing draws up, but there is no way it can be anywhere near as effective as what he has seen out of the Titans with Henry, especially the first week after the injury.

The Rams defense is the worst possible match-up for the Titans this week. And to make matters worse, Von Miller will be making his Ram debut. The Rams D-Line isn’t great but won’t let the weakened Titan run game get going, and the Ram DBs will be able to shut down Brown. Either Jalen Ramsey will draw the assignment of Brown, or Ramsey can shut down whoever is on the other side and allow Brown to be double-teamed. Before picking up Miller, LA already led the league in sacks. With Miller, they should be able to rush four and get pressure and sacks, and even cause the Titans to keep in extra blockers to help with Miller on the outside while Aaron Donald is double-teamed inside. Tannehill is out of his comfort zone if he has to just drop back and pass, but without the threat of the run with Henry, that’s what he’ll have to do. I expect the Titans offense will rebound in the coming weeks, but this week will probably be rough against this stout Ram D.

Who Can Stay Hot

Both of these teams come in riding four-game winning streaks. The Rams have only covered two spreads during their winning streak, though they missed covering last week’s 16 points spread by half a point after leading by 38 points. The Titans streak is much more impressive as they have also won ATS in those four games, and they were underdogs in the last 3. Tennessee has knocked off the Bills, Chiefs, and division rival Colts in their previous three contests. Coming off that string of wins and now going to LA without Henry, it’s easy to see a Titan team that is a little distracted. Mike Vrabel is a very good coach, but redesigning an offense and figuring how to slow down the Ram offense with your undermanned defense may be too much to ask.

Lay the Points With the Rams

We don’t know what we will get from the Titan team, so let’s buy a ticket with the team with the best quarterback, best defense, and now the best running attack in this game. It will cost us 6.5 points, but the Rams should be able to cover that number. Bet your Week 9 football picks FREE by taking advantage of a 100% REAL CASH bonus on your first deposit of $100 to $300 at MyBookie Sportsbook! (Must enter bonus code PREDICT100 during registration process).