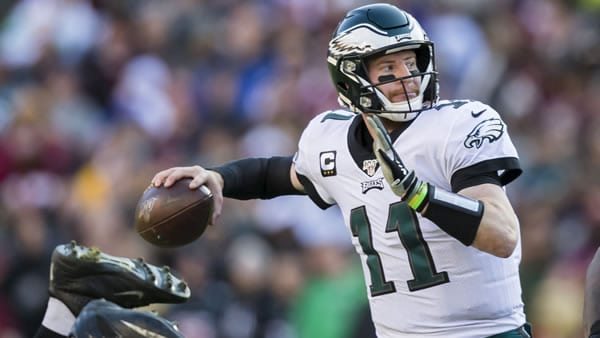 The New York Giants take on the Philadelphia Eagles in NFC East action on Thursday Night Football. While not the marquee matchup schedulers had hoped for, it’s an interesting game from a betting angle. The Giants were able to get their first win of the season against Washington last week, 20-19, as they look for another divisional win coming off the short week against the Eagles. On Sunday, the Eagles were in tough against the Baltimore Ravens, losing, but coming on strong at the end and covering the spread in a 30-28 loss. Who can come out ahead in the first of two meetings between these teams on TNF?

Normally, when two teams meet who are a combined 2-9-1, one might wonder what these teams really have to play for, but this is the NFC East. No team has really come out storming this season, and even in their respective predicaments, these teams are still in the mix. Whoever can vaguely hang in there this season and maybe get on a mini-spurt could end up right in this division-race. So while we have two teams that have experienced some bad injury setbacks where overall success has proven to be elusive, they are teams who could still have a future in this sideways NFC East. And last week attested to that with the Giants finally getting a win and Philly storming late to cover the spread.

MORE FREE CASH! DEPOSIT $50 TO $500 AND GET A 50% REAL CASH BONUS FROM THE FOOTBALL BETTING SITE WITH THE BEST LIVE BETTING PLATFORM —> BOVADA!

Giants Won Last Week, But Who is Looking Improved?

Not that anyone is looking at the Giants all that differently after last week, but the win was about as tepid as can be. At home, taking on a Washington team that has been really struggling, they got off to a double-digit lead, went into the tank, then had to stop a two-point conversion late in the game to avoid losing. For a team like that to get off to a lead at home against a fellow-doormat and then sit around waiting for the ceiling to collapse was not a good look. And only Washington stinking allowed the Giants to win. Daniel Jones managed s meek 112 yards aerially, threw another pick, and relied on a fumble recovery for a TD by the “D” to win. If not for the Giants’ defense snuffing that late two and scoring, we wouldn’t be talking about the Giants winning; we’d be talking about how absolutely awful they’re playing. The pluckiness of their defense aside, this isn’t a team that looks like it’s getting a lot better.

Philly at home can still play defense. The Giants are reduced to a regressing quarterback in Daniel Jones, and it’s not all his fault. With discarded Devonta Freeman now leading the run-duties behind that dicey O-line, it’s a bleak picture. There are some decent targets with Evan Engram, Golden Tate, Darius Slayton, and Washington’s secondary is pretty good, but 82 yards between the three last week is just terrible. The Eagles’ defense hasn’t really been able to keep point totals that low, but after playing the Rams, Steelers, and Ravens, this could be more to their liking.

Is Philly Offense Waking Up?

Going into week 7, they’re 1-4-1, so no, the offense isn’t really clicking. And one doesn’t want to read too much into a big fourth-quarter comeback that everyone knew was going to fall short. Overall, however, we’ve seen some better efforts from a team that opened the season in such sloppy fashion. After beating the 49ers on the road, they went into Pittsburgh and gave the unbeaten Steelers something to worry about before fading a little late. And in over-performing in a two-point loss to Baltimore, we saw the offense coming alive some.

Carson Wentz is still a bit errant and hasn’t been connecting that well with some key receivers, an area where injuries have forced a patchwork unit. He did throw two touchdowns on Sunday, and importantly, no picks after having 9 through the first five games. Travis Fulgham is coming to life at receiver, and there’s still TE Zach Ertz, but the cast is thin. More encouraging on Sunday was the run-game. Against a swarming Baltimore front, both Wentz and Miles Sanders were effective, with Wentz putting some nice runs together with a TD scamper, while Sanders wowed with 118 yards on just nine carries, including a 74-yarder. Against a Giants’ team that doesn’t figure to leave them in the dust like the Ravens were threatening to do last week, they could put this run-game to more-effective use. However, that O-line, a seriously-depreciated unit that allowed six sacks on Sunday, doesn’t always cooperate, and that former team-strength has become an iffy area. And Ertz and Sanders both leaving the game on Sunday is something to watch as their status becomes clearer throughout the week. Asking Philly to cover this spread with even more key pieces missing on offense could be too much to ask.

Will the Giants’ Defense Have a Say?

On Sunday, we saw a Giants’ “D” able to really win the game for the team and cover up the inadequacies on the other side of the ball. There have been issues this season, namely in giving up a combined 73 points to the Cowboys and 49ers. But otherwise, they’ve been pretty solid, allowing just 26 to Pittsburgh, 17 to Chicago and the Rams, and 19 last week to Washington. They’ve been rushing the passer a little better lately and getting more takeaways. Against Wentz and that O-line with the lack of weapons, this is a spot where the Giants’ “D” could resonate.

In this division with these two one-win teams, just about any stance can be justified. Neither are bankable enough forr one to feel abundantly-optimistic. The Giants have a good case for why they should cover, but they did last week too and couldn’t get it done, proving that laying points on a bad team has a lot of drawbacks, as it does in this spot with Philly. But from a basic sort of level, I just see the Eagles as being the slightly more-functional football product right now. And at home, I see them being more able than the Giants to pull off what they’re trying to do. Maybe some of that liveliness we saw against Baltimore can carry over this week. And having played here last week, they might be more comfortable at home in this short-week turnaround. I’m taking the Eagles.

Loot’s Prediction to Cover the Point Spread: I’m betting on the Philadelphia Eagles minus 6 points. Note: Many football bettors are bitter that 5Dimes no longer offers service to players in the USA. YOU CAN STILL BET ON GAMES AT -105 ODDS THOUGH! Find this huge money saving offer at BetAnySports! We’ve advertised them for over 10 years with ZERO complaints! Click here to sign up now and get your reduced juice back! You’ll be so glad you did!