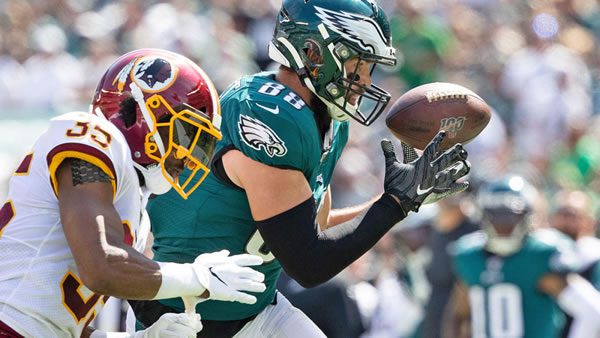 Point Spread: Phil -5.5 (MyBookie - Their odds boosts are amazing! You’ll receive a 100% bonus on your first deposit when you use bonus code PREDICT100 as well!)

In what probably amounts to an elimination game as far as making the playoffs are concerned, the Eagles host Washington for an NFC East rivalry bout Sunday afternoon in Philly. Both these teams are 6-7 on the season, and eight losses might be too many. So getting to .500 would be huge for either team.

The Eagles opened as short home favorites for this game, but early betting action pushed that spread two points. How are we playing this one with our free NFL betting pick?

The Week 15 NFL betting odds opened the Eagles as three-point home favorites for this game, with an over/under of right around 44.5. Early betting action then goosed Philly two points to -5.5.

Any bettors thinking Washington might win this game outright could get upwards of +230 on the NFL betting Moneyline.

The Football Team just suffered its first defeat since October, a 27-20 decision at home to Dallas last Sunday. Washington fell behind to the Cowboys 24-0 at the half, pulled to within one score with four minutes left, and got the ball back but fumbled it away to lose both SU and ATS as a six-point home dog.

Prior to last week, though, Washington had out-gained five of its previous six opponents and out-rushed each of its last six foes.

At 6-7 overall, the WFT won’t catch the Cowboys in the NFC East, but they do own the No. 7 spot in the NFC playoff standings, a tie-breaker ahead of four other teams.

The Eagles, meanwhile, are 3-1, both SU and ATS their last four times out after winning at the Jets two weeks ago 33-18. Philadelphia then enjoyed last week off.

At 6-7 overall, the Eagles won’t catch Dallas in the divisional race, but they only trail Washington by a tie-breaker in the battle for that No. 7 spot in the NFC.

The Eagles beat Washington six times in a row from 2017-19, but the WFT swept the two games from Philly last season by scores of 27-17 and 20-14. The defenses dominated both those games, as neither team produced 300 yards worth of offense in either game.

The Under is 8-5 in Washington games this season, which are averaging 45 total points.

The Overs is 7-6 in Eagles games this season, which are averaging 48 points.

Overs are 3-1 over the last four meetings between these teams.

Both starting quarterbacks in this match-up are listed on this week’s injury reports; we expect Heinicke to start for Washington, Hurts for Philadelphia. And we’ll give the former the edge in that QB comparison. Also, the Eagles bounced back last time out from a disappointing loss in their previous game. Now, it’s Washington’s turn to rebound, following its disappointing defeat last week. We like the Football Team here for the outright win on the Moneyline. Note: Stop wasting your hard earned money! Stop betting on games at -110 odds! Start laying only -105 TODAY at BetAnySports! Better prices! Better bookie!