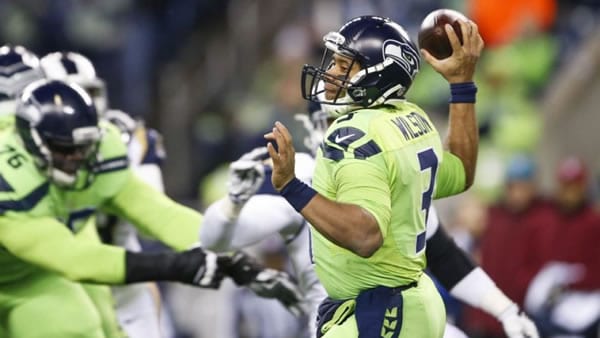 The Los Angeles Rams come to Lumen Field on Saturday to take on the Seattle Seahawks in an NFC Wild Card game. These familiar divisional teams will meet in the playoffs for the first time since 2004. With an 18-7 win over the Cardinals on Sunday, the Rams punched their tickets into the postseason. For Seattle, it’s the 8th time in 9 seasons that they made the playoffs. A 26-23 win over the Niners on Sunday gave them their fourth straight win to close the season at 12-4. Who can get it done in Seattle on Saturday?

There is a built-in quirk when divisional teams meet in the postseason, and with two games between the opponents already this season, we have something to fall back on. They played on November 15 and also just two weeks ago, making those meetings all the more relevant. The November meeting was a 23-16 win for the Rams at home. Two weeks ago, the Seahawks beat the Rams, 20-9, as their defense could win the day. We saw evenly-matched teams, mostly separated by mistakes that ended up deciding each game. We should anticipate more of the same, two teams that are matched up well where the team that commits the fewest mistakes will likely win.

The main question going into this game is whether Jared Goff will play for the Rams and the prospects of the Rams’ chances if starting John Wolford at quarterback. Even according to Rams’ head coach Sean McVay, it’s going to be tough, meaning starting Goff might be a longshot. The cold of Seattle doesn’t help, and even in the event that Goff plays, how good can he be less than two weeks removed from thumb surgery? The Rams can carry forward knowing that Wolford was good enough to lead the Rams to a two-score win over an Arizona team on Sunday that was playing for its playoff future. Granted, losing Kyler Murray made the opponent a diminished unit, but Wolford showed some upside, completing 22 passes and running for 56 yards, showing a really nice set of wheels. Whether the Rams can make it work at this heightened level with a QB who is nothing like the player he is backing up remains to be seen.

It’s not going to be easy. With Goff in there, they can make use of a talented crew of ball-catchers. They have formed more of a run game as the season has aged, with Cam Akers, Malcolm Brown, and now Wolford using his legs. But the diminished state of the LA offense does make things easier on a Seattle defense that has really come around over the course of a season. And the prospects of this Rams team being able to forge on through the playoffs in this reduced state is iffy at best. It’s not just Goff. The line is banged-up. Running back Darrell Henderson, Jr. and Cooper Kupp are out. Unfortunately, the wheels came off in such untimely fashion for the Rams.

Get all of our NFL Wildcard Round Picks >>>

The Rediscovery of Seattle’s Defense

Earlier in the season, we saw a Seattle team thriving in the shootout format. Their offense was on fire, putting up points in bunches in a virile display of offensive fruitfulness. But a defense that was almost as bad as their offense was good stood out as a major liability. Over the season, we have seen a role-reversal on both sides of the ball, almost to the point where Seattle has reclaimed its former style of play—where the defense does its thing while the offense ekes it out on offense. To the dismay of many Seattle fans, the offense hasn’t really flexed its strength. Scores like 35-30 and 37-34 became 23-20 and 20-15. We saw a more-resourceful offense, and while it’s not as scary as what we saw earlier in the season, the turnaround of the defense has really been remarkable.

Therein lies the major issue for the Rams for the purposes of advancing past this game. Against Arizona, they didn’t score a touchdown on offense, getting three field goals and a pick-six to make up their 18 points against the Cardinals. While their defense is a major asset, a stout group that could conceivably keep the Seattle offense under wraps, they’re likely going to require a more-realistic route to scoring points in order to keep pace with Seattle. But after holding Seattle to 36 combined points in their two games, perhaps a resourceful effort from offense and an elevated defensive effort will keep the Rams in this game.

Seattle tends to play down to the level of its opposition. Could that suit the Rams? The way the Seahawks are playing, a lot of opponents are going to be in the game. Seattle has infrequently combined good days on offense with good days on defense as of late. It creates a scenario where you can start making a case for the Rams to at least be in this game with a chance to win, regardless of what issues they’re experiencing on offense. It’s not like the Seahawks’ offense has been getting better as the season gets older. The Rams’ defense could make an impact, perhaps score some points, and then it’s not so hard imagining a Goff-less Rams’ team competing in this road playoff context.

There is something that makes one hesitant to lay points on a Seattle team that has been grinding its way to wins of late. But whereas the Rams were able to find success against an Arizona team that had been slip-sliding in the second half of the season, I think this represents a different ball of wax. The Seahawks may have shifting identities this season, but it’s a formula that is working. At home in a familiar postseason setting, I see them getting the win and cover against the compromised Rams.

Loot’s Prediction to Cover the Point Spread: I’m betting on the Seattle Seahawks minus 4.5 points. Bet this game and ALL your football picks (basketball too!) at reduced odds -105 instead of the more expensive -110 option that you’re stuck with! Find this killer offer at BetAnySports! Home of cheaper betting odds!