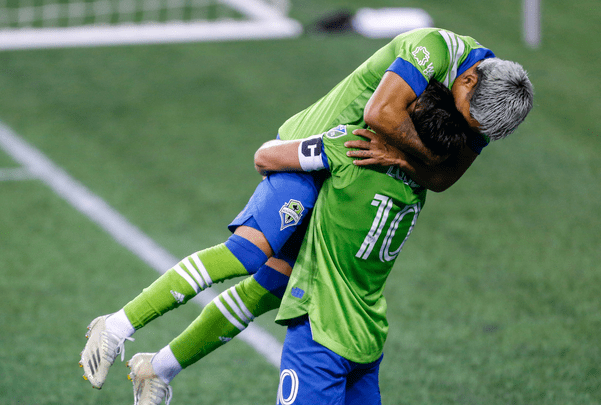 The 2018 MLS champion makes the trek west to visit the 2019 MLS champion, with the former looking to generate some offense and the latter looking like a genuine threat to regain its crown. Atlanta has managed to tread water to this point in the season, getting their second win of the season, but the Five Stripes aren’t exactly doing much to create chances in the final third. For the year, Atlanta has just six goals, and one of those was an own goal, with another coming on a penalty. Put simply. This isn’t the high-flying side that MLS observers came to expect when Atlanta was dominating the league in 2018 and 2019. And that’s a major problem because, despite battling injuries, Seattle looks even more dominant than it was in 2019. The Sounders still haven’t given up a goal in the run of play, as both goals they’ve given up came after Seattle conceded a free-kick. Neither of those goals came at Lumen Field, though, and even with regular keeper Stefan Frei on the shelf, the Sounders’ defense has been rock-solid. Can Atlanta figure out what ails its offense and put a stop to Seattle’s momentum?

The first two matches were outstanding for Atlanta, as the Five Stripes came out with four points and three goals, seemingly putting their disastrous 2020 campaign behind them. But then Atlanta lost Ezequiel Barco and Jurgen Damm, and since then, the Five Stripes have seemed completely directionless when they’ve got the ball. Atlanta only generated two attempts on goal against Montreal and was fortunate to find the winner four minutes into stoppage time on a goal from Damian Moreno. Part of this can be explained by learning a new system, but Atlanta seems to lack any confidence right now in the final third, which has allowed opponent after opponent to simply sit back and wait for Atlanta to try to make a move toward the goal. Given the issues in the midfield, this appears to be a problem that is going to get worse before it gets better.

It hasn’t seemed to matter what the injury bug throws at the Sounders: they just keep finding a way to do the job. Against San Jose, Seattle lost Stefan Frei to an injury and was out of substitution windows, forcing the Sounders to put Alex Roldan in goal. Against Los Angeles FC, the Sounders turned to backup Stefan Cleveland with Frei on the shelf, despite Cleveland having played just once in the past calendar year. And yet, it worked, as Seattle managed to shut out both California teams, making it four clean sheets on the season. For the year, the Sounders haven’t given up a goal at home, despite four starters from last year’s team currently sidelined with injuries. That includes captain Nicolas Lodeiro, who’s only been able to come on in reserve duty once in six games. Despite that, Seattle has not only dominated the early part of the season but has gotten stronger as the games have gone on. The Sounders have only scored in the first half twice while pumping home 14 goals in the final 45 minutes.

Given Seattle’s injury issues and Atlanta’s total lack of a scoring threat, backing Seattle and under 2.5 goals at +325 seems like the best aggressive way to play this matchup. The Sounders have scored two goals or less in each of their past three matches, and with a less experienced keeper at the back, Seattle is likely to play a less attacking style that allows it to get out with the victory. However, if you’re worried about Raul Ruidiaz having another big game, you can back the Sounders to win to nil at +190. Seattle doesn’t appear to have much to fear from Atlanta’s struggling attack and has played excellent defense all season long, making the shutout a strong possibility. Finally, this one’s a risk, but I’d take a look at a scoreless first half at +200. In six matches, Seattle has already seen a scoreless first half on three occasions. Given that Atlanta only generated two scoring chances against Montreal, there’s an excellent chance that these teams go into the locker room at 0-0.

Eventually, the bubble is going to burst for the Sounders’ defense, but Atlanta doesn’t seem to be the team that can make that happen. The Five Stripes aren’t generating the kind of chances that you need in order to break through the Seattle defense, and the Sounders don’t seem to be bothered by anything that gets thrown their way. The Sounders haven’t lost to Atlanta in their history, and I don’t see that changing here. I’ll take the Sounders to win a 2-0 decision at +800.