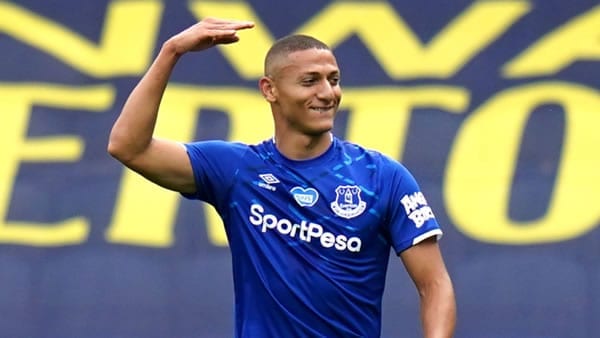 The teams drew 1-1 on Nov. 3 at Goodison Park in Liverpool.

The pause seems to have paid off for Everton, which has pulled out two wins and a draw in three matches since the restart and vaulted into the mix for a Europa League place. The Toffees are now just five points back of a sure Europa League spot and have a favorable schedule the rest of the way, which has them set up well to keep the momentum going and make a run at the top seven.

The same cannot be said for Spurs. Tottenham hasn’t been a disaster by any means. Still, the backline problems showed up again for Spurs against Sheffield United, as the Blades hit Spurs for three goals, marking the first time Sheffield had scored three against anybody since Thanksgiving. Tottenham has the talent to be a top attacking side when it wants to be, but the attack hasn’t been there for Spurs as of late — Tottenham has been held to a goal or less in five of its past six matches.

Truth be told, Everton was probably a little fortunate to get its win on Wednesday at Goodison Park, as it needed an early penalty to take control of the match against Leicester City. But the Toffees have been virtually invincible at home, having avoided defeat in eight consecutive games.

Away from home is another matter. Everton did manage to get a win in its most recent road match at Norwich City, but the Canaries have basically given up on the season, so that’s not exactly an impressive result. Aside from the 1-0 win over Norwich, goals have usually been the norm when Everton goes on the road — for both sides. In Everton’s past five road matches, both teams have scored on three occasions, and three of the five saw at least four balls go into the net. Everton has some solid attackers in Dominic Calvert-Lewin, Richarlison, and Gylfi Sigurdsson, and the Toffees aren’t afraid to take chances and push the tempo, making them an enjoyable team to watch in most matches.

A side with Harry Kane, Dele Alli, and Son Heung Min should never have problems scoring goals, but that’s precisely the problem Spurs have right now, as they haven’t scored more than one goal of their own in six consecutive matches. Even the one game in six where they got two, a win over West Ham United, came with an asterisk because one of the two was an own goal off a West Ham player.

Since the restart, only Harry Kane has really shown up for Spurs’ attack, as he has two of Tottenham’s three goals since the pause. To make matters worse, Dele has picked up a hamstring injury and is questionable for Monday.

The real nightmare for Spurs comes at the backline. Europa-caliber teams usually don’t concede more than a goal a match (among the teams above Spurs, only Chelsea have conceded as many as Tottenham’s 44 goals allowed), and Spurs haven’t exactly been a lockdown side against lesser offenses. Among the teams to get two or more against Spurs are Norwich City, Aston Villa, Brighton and Sheffield, none of whom have scored more than 36 goals this season.

In short, Spurs is a side that’s capable of just about anything — good and bad. That extends to manager Jose Mourinho, who is not on good terms with his players and just recently said that it wouldn’t be the end of the world if Spurs finish outside the top six — a finish that would mark Spurs’ worst since 2009.

Traditionally, Everton doesn’t play well against Spurs, but the Toffees have managed to get a draw in their past two matches against Tottenham, and with Mourinho and his players barely on speaking terms right now, this might be a good time to take a chance on the Toffees. If you’re feeling daring, Everton is getting +145 for a draw no bet, a rather attractive price for a side that’s actually played solid soccer as of late.

If you don’t feel daring, you can play conservatively by backing both teams to score, which is paying at -139. Both of the past two matches between the sides finished in a draw with both teams finding the net, and both have the attackers to hit the mesh again in this matchup. Given that Spurs are a side in a flux, this is an excellent time to take a chance and back Everton to win and both teams to score at +500. Spurs have scored in 12 straight matches against English opposition, but with the turmoil going on in north London right now, this isn’t a side I want to back to do more than get the obligatory Harry Kane goal.

Speaking of that, here’s a solid prop to play: Kane to score the last goal of the match at +333. It’s happened in both of Spurs’ past two games.

I know the history says not to trust Everton in this matchup, but the Toffees are in solid shape right now, and Spurs is in a sea of turmoil. Mourinho seems to be waving a white flag and doesn’t really seem to be on the same chapter, let alone the same page, with his roster. With Spurs a mess, the value in this match is on Everton, and that’s the way I’m going to look. A correct score of 2-1 Everton is a major gamble, but at +1100, it’s one worth taking in this situation.

Your probably saw our ads for MyBookie offering 100% and 50% bonuses. Those are great, but when it comes to value in sports betting, wagering at reduced odds is simply the best route to take. Do yourself a favor and dump your overpriced bookie and start wagering at discounted odds (Think Walmart pricing vs. regular store) -105 instead of the spendier -110 that you’re laying. The savings are astounding! Check out our 5Dimes Sportsbook review for more info. You’ll be so glad you spent the 10 minutes to do so!